Not only is Sanni Brown-Adefope a former resident of The Salvation Army Booth Brown House in St. Paul, she’s a living example of what kids and young adults learn at the youth housing facility: Do the right thing, and never give up.

Sanni, 31, is now a successful radio host at KMOJ 89.9 FM in Minneapolis. Vivacious and intelligent, most people are surprised to know she used to be homeless, and was raised in several foster homes. During her mid-teens, her mother began suffering from mental illness and could no longer care for her. Several years earlier, her father was deported to Nigeria. 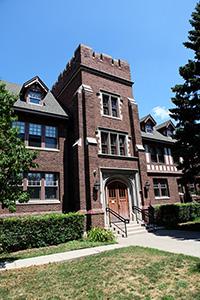 Sanni lived at Booth Brown House (pictured) when she was 16 years old, while awaiting placement in a foster home. At Booth Brown, she received the same loving care as the dozens of formerly homeless youth who will sleep there tonight.

“Booth Brown House gave me some pretty good memories during a really chaotic time in my life,” she recalled. “I remember movie nights on Fridays, and going to the gym on Saturday afternoons. Next to the activities, eating chocolate chip pancakes was one of my fondest memories.”

She also learned to knit from a volunteer, and remembers using the activity as “a way to cope with family issues.” 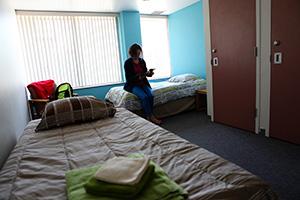 Booth Brown House provides both emergency and long-term housing for kids and young adults in crisis. It features an 11-bed emergency shelter (pictured) for youth ages 18 to 21, plus 35 efficiency apartments for youth ages 16 to 25. Ten of the 35 housing units are transitional apartments for youth in situations similar to what Sanni experienced. All residents receive caring support from Salvation Army case managers.

“Booth Brown House provides peace, comfort and hope for kids and young adults with no place left to turn,” said Major Jeff Strickler, Twin Cities Salvation Army Commander and a former director of the facility. “Our case managers are committed to helping youth stabilize, set goals and realize their potential.”

After staying at Booth Brown House for a month or two, Sanni moved into a loving foster home, where she remained throughout high school.

“(Booth Brown House) is also the place I met my foster sister, whom I still keep in contact with today,” she said. “Definitely some good memories.” 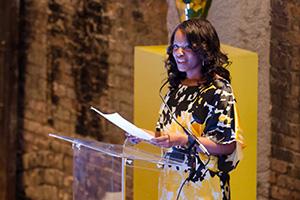 Sanni went on to graduate from Concordia University in St. Paul with a bachelor’s degree in psychology. She later completed broadcasting school in St. Louis, Missouri through a scholarship she won at a DJ competition sponsored by Brown College. In addition to her radio work, she’s spent most of her life working with or volunteering to help children. She’s also a budding motivational speaker (pictured), attending classes through the National Speakers Association.

She loves telling kids to be strong and never give up.

“If you want something, you must understand that there will be obstacles on the journey toward attaining it,” Sanni said. “Lots of people are going to put you down, but you’ve got to stay positive. Get a support system, because that is the cushion you’re going to need – ’cause it’s cold outside.”