Spend an afternoon at The Salvation Army Harbor Light Shelter in Minneapolis and you will see Brenda Turner (pictured) hard at work making hot meals for hundreds of people who file through her kitchen each day.

“I started off as a part-time food service worker – now I’m lead cook and I love it,” she said with a smile.

Although feeding the people who stay at Minnesota’s largest homeless shelter can be hard and thankless work, Turner believes it’s a chance to give back and inspire others.

“I stayed here, I ate this food. I was homeless, so I know what it’s like,” she explained. “If you touch one person, then you’ve made a difference.”

In 2005, it was Turner who landed here, homeless and in need of hope. She had served nearly two years in prison in Tennessee after violating her parole on a drug conviction.

“I was running from an abusive situation,” Turner said. “I left St. Paul and went to Memphis to live with my brother. He was a drug dealer, and I got caught up in a raid at his house.”

With two young sons, Turner said she decided it was safer to live in Minnesota with other relatives instead. So she came back here – even though the parole board said she couldn’t.

“I didn’t listen. I thought I could do whatever I wanted,” she explained. “I found out real fast that wasn’t true.”

Turner lost custody of her children and was extradited back to Tennessee, where she served two years in prison. With her sons adopted by a pastor and his wife, Turner moved back to Minnesota when she was released, looking to rebuild her life and reconnect with her family.

“The worst thing was losing my kids, I can’t get that time back,” she said. “It took a long time for me to forgive myself.”

Turner says her healing didn’t truly start until she ended up at Harbor Light in 2005 with no job, no home, and nowhere else to turn.

“The Salvation Army has been a blessing for me,” she said. “It truly saved my life.”

Turner spent eight months in a Harbor Light program that required sobriety and work therapy. But she says the most important thing she learned was coping skills.

“It was a spiritual recovery program,” she said.” I told them I’m not an addict, but realized that it was more about recovering from life for me.”

Still, Turner says avoiding marijuana, alcohol and anyone who uses the substances is an important part of her life now.

“I want to be healthy for myself and my kids, mentally, spiritually, physically. I lead a completely sober life and I only have sober friends,” she said. 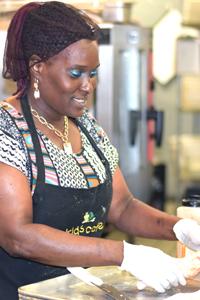 Today, Turner lives on her own, works full-time at Harbor Light (pictured), and is a member of The Salvation Army church.

“I grew up in the church, but the streets can seduce kids,” she said. “The Salvation Army brought me back to my roots. I know that no matter what I’m going through, I don’t have to use drugs, I don’t have to drink, and prayer is going to help me.”

Turner’s oldest son is now 21 and they are rebuilding their relationship, though it hasn’t been easy.

“I can see a lot of pain in him, a lot of hurt, I just pray for him,” she said. “I told him, God forgave me, it took a long time for me to forgive myself – now I hope you will forgive me, too.”

Her younger son turns 18 this summer. She hopes to have a relationship with him as well, but says ultimately it will be up to him.

Whatever the future holds, Turner says she will face it with courage, knowing that through divine grace she has been given a second chance at life.

“Through the strength of the Lord, I’m a survivor,” she said. “And when God touches you, you are free indeed.”

Please join The Salvation Army by volunteering or making a donation to support your local community.