Staff and volunteers on The Salvation Army’s Emergency Disaster Services team are on standby as rising temperatures raise the threat of spring flooding in Minnesota and North Dakota. 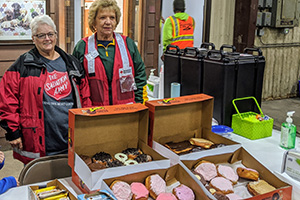 In Fargo, N.D., our disaster teams are already on the ground serving meals, snacks and water at Sandbag Central (pictured), where this week hundreds of local volunteers have been filling sandbags for 12 hours a day. Government officials predict the Red River will crest at 38 feet, and they anticipate rural residents could expect flooding similar to or worse than last year (read flood report).

“As the community has a need, we seek to meet it as best we can,” said Andrew Lynch, who leads The Salvation Army’s disaster team in Cass and Clay Counties.

In Northern Minnesota, the Brainerd Lakes Salvation Army is preparing to serve residents of Aitkin and surrounding communities, where flooding is almost a certainty. 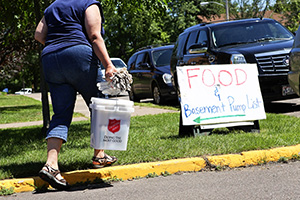 “The ground is saturated here – all it will probably take is one big rainfall for flooding to occur,” said Captain Joyce Curran, leader of the Brainerd Lakes Salvation Army. “We are ready for the possibility of flooding, we are stocked up on supplies, and our team is aware.”

The Salvation Army Northern Division includes nearly 400 trained disaster volunteers throughout Minnesota and North Dakota. Many are on standby to provide food, water, emotional/spiritual care, cleanup kits (pictured), and other support for survivors of floods and other disasters such as fires and tornados. 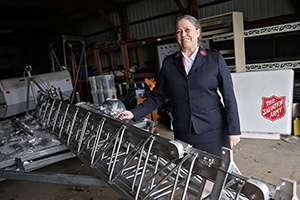 “We are ready to serve and we are prepared,” said Major Rae Doliber (pictured), Emergency Disaster Services director for The Salvation Army Northern Division, who remains in regular contact with government officials and other relief organizations. “We appreciate the support of donors and volunteers for making our work possible.”

The Salvation Army has been responding to natural disasters and emergencies since 1900, beginning with the Galveston, Texas hurricane that claimed countless lives. Today, thousands of trained Salvation Army disaster staff and volunteers provide comfort and relief when disasters strike anywhere in the world. Read about The Salvation Army’s ongoing relief efforts for tornado survivors and relief workers in Middle Tennessee.

The Salvation Army Northern Division pledges to do the most good with your gifts of time and money, with 81 cents of every dollar going directly to services. Join us by volunteering or giving a donation to support your local community.