A Place at the Table

There is a place at the table for every person who comes to The Salvation Army.

Indeed, the people who visit us for a hot breakfast, lunch or dinner come from all walks of life. Many are experiencing homelessness. Others are seniors on fixed incomes, or young families scratching and clawing to make ends meet.

All require food to sustain them through their struggles. Thanks to your donations, The Salvation Army Northern Division is able to help. We operate more than a dozen hot meal programs at our locations throughout Minnesota and North Dakota, serving about 1,000 meals every day.

The people below are thankful for our hot meal programs. We met them as they were eating mashed potatoes and stew at The Salvation Army in Fargo, N.D., which serves a hot breakfast and lunch for around 200 people every weekday.

Your gifts allow The Salvation Army to provide hope and nourishment for these people and hundreds of others every single day.

Jimmy is an 85-year-old man who lives on a fixed income. He was born in the Fargo area but spent much of his life living in Arizona, Texas, Montana, and elsewhere. 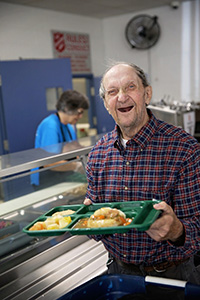 “Back then there was a song on the radio called ‘Go West Young Man’ – so I did,” he said with a chuckle.

During his life, Jimmy mostly worked blue-collar jobs in restaurants and hotels. He was also a traveling worker for Barnum & Bailey and other circuses. He tried enlisting in all four branches of the military but was denied.

He started attending church at the Fargo Salvation Army in 2009.

“The Army may have rejected me, but The Salvation Army didn’t,” he said with another laugh, adding that his faith has helped him stay sober since 1977.

Jimmy comes by for a hot meal several times a week. Without The Salvation Army, he would have a difficult time getting all of the food he needs.

“It’s hard to get by on a fixed income – food prices are sky-high,” he said. “The Salvation Army is so good to me.”

Keith, 36, and Alexandra, 33, are a young family trying to get by. They have a 6-month-old daughter, and Alexandra is pregnant with their second child. They moved to Fargo in September. 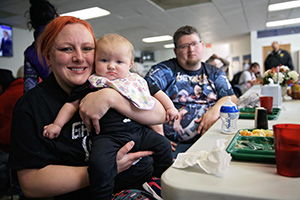 “We want to make a life up here,” Alexandra said.

When we met the couple, they had stopped by the Fargo Salvation Army to pick up some donated dog food when they noticed a free hot meal was being served. They were comforted to know there was a Salvation Army in their new hometown, having previously received help at the Grand Forks Salvation Army.

“It’s hard for our family to make it,” said Keith, adding that Alexandra was actively looking for work and affordable daycare for their daughter. “The Salvation Army has helped us a lot. We’re thankful for everything they’ve done for us.”

For Brian, the camaraderie at The Salvation Army is just as important as the hot meals. He pays a visit almost daily. 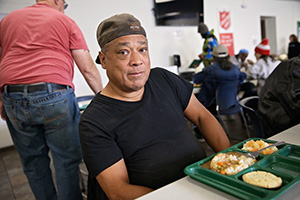 “This is a place where anybody can come,” the 61-year-old said.“These are my people.”

Brian has had a hard life. He grew up in Minneapolis and experienced homelessness for about half of his life, starting at age 14. He spent years working as a cab driver and day laborer. He can’t work anymore and lives on modest disability benefits.

“I’ve never thrived – only survived,” said Brian, who moved to the Fargo area from Duluth, Minn., soon after the COVID-19 pandemic began.

Despite his difficult past, his faith remains strong. He attends a Bible study at the Fargo Salvation Army once or twice a week.

“The Salvation Army helps the downtrodden,” Brian said. “They help the kind of people that everyone was mad at Christ for sitting with.”

Our food programs throughout Minnesota and North Dakota need help due to record costs for food and transportation.

“Guest numbers are increasing while costs are rising,” said Lt. Col. Dan Jennings, leader of The Salvation Army Northern Division. “We are doing our best to cut costs in order to continue serving the highest number of people.”

At the Fargo Salvation Army, for example, the kitchen staff has switched from using milk to powdered milk because it’s far cheaper.

You can help The Salvation Army provide food for hungry people and families by giving a donation or signing up to volunteer at our food pantries and hot meal programs.