The Salvation Army Northern Division is proud to celebrate Veterans Day and honor the brave men and women who have served our country.

Our gratitude for veterans is on display year-round through the wide range of programs that your donations allow us to offer in Minnesota and North Dakota – including veteran housing, basic needs assistance, rehabilitation, counseling, and more. 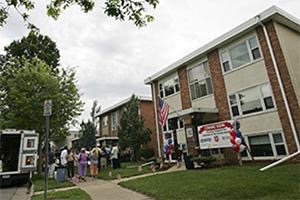 In the Twin Cities, for example, The Salvation Army operates two supportive housing complexes for veterans (pictured). The veterans can stay up to two years while Salvation Army caseworkers help them stabilize, find employment, and secure permanent housing. Additional support is provided at the nearby VA Medical Center. 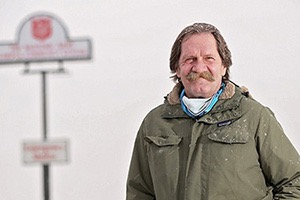 These services helped a U.S. Marine Corps veteran named John (pictured) to find housing and start his life over. He had been teaching world history at Florida State University for 12 years before a string of tragic events left him homeless in St. Cloud.

“If not for The Salvation Army, I don’t know what would have happened to me,” said John, choking back tears. (Read John’s story.)

The Salvation Army also partners with other nonprofits that serve veterans, including Every Third Saturday, which distributes clothing, bedding and coats for struggling or homeless vets. When these distributions occur, The Salvation Army often serves food and water for staff, volunteers and veterans. 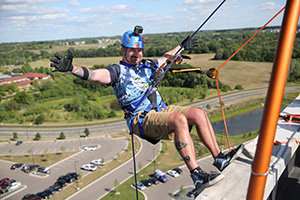 “The Salvation Army has been great to us over the years,” said Every Third Saturday director Tom McKenna, a U.S. Marine Corps veteran who saw frontline action in Somalia and Iraq. He is pictured at The Salvation Army’s Down for the Challenge fundraising event last summer, where he and nine of his fellow vets rappelled down a 14-story building to support our housing and homelessness-prevention programs.

The Salvation Army has a long history of supporting our men and women in uniform, starting in the 1910s during World War I, when female Salvation Army volunteers called “Donut Girls” served American soldiers battling on the frontlines. The Donut Girls made and served thousands of donuts a day for U.S. troops, while also praying with the soldiers, helping them write letters, mending their clothes, and more.

By the end of World War II, The Salvation Army operated more than 200 “Red Shield Club” centers across the U.S. for veterans to enjoy food, activities, and fellowship. 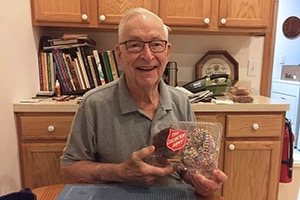 Twin Cities resident Donald Severson (pictured), 92, frequented a Red Shield Club in New England while he was training to become a Coast Guard Yeoman in 1951.

“That place felt like home,” Donald recalled. “The (Salvation Army officers) who operated the club were like a mother and father to me. I’ve been supporting The Salvation Army ever since.”

The Salvation Army is proud to continue serving veterans and we honor them for the sacrifices they’ve made.

“Happy Veterans Day to the men and women who have served our country and protected our freedom – you are heroes,” said Lt. Col. Dan Jennings, leader of The Salvation Army Northern Division.