Mother finally has reason for optimism

Kerry of Albertville, Minn., is finally optimistic about her future after a lifetime of terrible circumstances – including a long battle with addiction and the loss of her right leg. 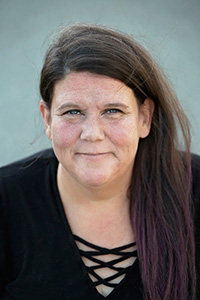 Kerry, now 41, grew up in Florida and didn’t have much of a childhood. At the tender age of 13, she became a caregiver and financial provider for her niece and nephew after her older sister walked out on the children. She and the kids lived at the home of Kerry’s mother and grandma, both of whom were disabled.

“I worked at a fast-food restaurant and I did a paper route – I lied about my age on the job applications,” Kerry said. “I stepped up for my family.”

Years later, Kerry met her future husband and had children of her own. In 2008, the couple got married and moved to Buffalo, Minn., to be closer to Kerry’s husband’s family. She and her husband needed support in raising their son, then 16 months old; Kerry’s 4-year-old daughter from a previous relationship; and Kerry’s niece and nephew, by then ages 10 and 14, respectively.

Seven years went by. Kerry and her husband both had full-time jobs and worked hard to raise all four children.

“It was hard and we struggled sometimes, but we made it,” Kerry said.

In 2015, her niece and nephew were older and moved out. After they left, Kerry and her husband decided to move back to Florida.

Soon after they arrived in the Sunshine State, dark clouds formed over Kerry’s life.

After Kerry’s niece and nephew were gone, she began to drink.

“I’d grab a bottle of whiskey on my way home from work,” she recalled. “I was stressed out.”

Drinking numbed the pain of all the hardships she’d endured ever since she was a little girl. For 22 years, she had never dealt with the heavy weight of having so many people depend on her. All she’d ever done was go, go, go, never taking time to take care of herself. Looking back, she compares it to post-traumatic stress disorder.

Her life became even more stressful in May 2015, when her husband announced he wanted to separate.

“At that point my drinking kicked into high gear,” Kerry said.

The couple moved back to Minnesota to try to salvage their relationship, just a few months after they’d packed up their lives to move to Florida. Kerry and her kids began living with her friends in St. Cloud, while her husband moved in with his sister.

Kerry’s drinking continued to escalate, and she became an expert at hiding it. She was teetering on the edge of disaster.

One night, while partying with her neighbors, her life officially derailed when she tried methamphetamine.

“My neighbors swore to me that meth addiction doesn’t happen after one hit," Kerry said.

They lied. After smoking the drug one time, she was hooked.

“Meth made me forget about everything that had happened in my life,” she said. “It made me so I wasn’t crying all the time. I loved it.”

She soon developed a full-blown meth addiction, got divorced, and lost primary custody of her kids.

The next three years of Kerry’s life were awful. She bounced between Florida and Minnesota trying to get clean, staying with friends and in sober houses. No matter how hard she tried, she couldn’t break her addictions to meth and alcohol.

One morning in Florida, a police officer woke her up while she was passed out on the lawn of her friend’s home.

“The officer said the owner of the house wanted me gone,” Kerry recalled. “I told him I had nowhere to go.”

He took her to The Salvation Army, where she received a hot meal and safe place to sleep.

“The next morning, I remember waking up in the shelter and seeing a sign that read, The Salvation Army: Center of Hope,” Kerry said. “I’ll never forget it, because that’s what I needed – hope.”

She spent the next 90 days at The Salvation Army while enrolled in a Bible-based inpatient rehabilitation program, graduating on Aug. 4, 2016. Although she would relapse later that year, the spiritual tools she learned at The Salvation Army helped her to become clean – once and for all – on April 17, 2017. She spent the next 18 months working, living in a sober house, and rebuilding her life.

Kerry moved back to Minnesota in late 2018 to be closer to her kids and prove she could be a good mom again. By then, her ex-husband had remarried.

Soon after she arrived, she developed blood clots in her foot. Her condition became so serious that she spent the next two years in and out of the hospital, sometimes for months at a time.

Unable to work, she slept in homeless shelters and with friends. Week after week she applied for subsidized housing but was denied at every turn.

Kerry had become chronically homeless – defined as a person who experiences homelessness for at least a year while battling a physical disability, mental illness, or substance abuse.

In November 2020, she finally caught a break: The Salvation Army had an opening for a permanent supporting housing unit in Albertville.

“I dropped to my knees and said, ‘Thank you, Jesus,” Kerry said, choking back tears. “What’s amazing is that I never even applied to The Salvation Army – they got my application from another agency. I immediately remembered the sign I saw at the homeless shelter all those years ago – Salvation Army: Center of Hope. It was an answer to prayer.”

The Salvation Army manages dozens of similar units throughout the Twin Cities, providing chronically homeless individuals and families with a safe place to live and case management services.

Kerry is now reunited with her daughter and they live together in the Albertville home.

“I love my daughter and I’m grateful to be with her,” Kerry said.

Just when Kerry thought her life had stabilized, the blood clots in her foot returned in full force earlier this year. She underwent six surgeries but none were successful.

“I kept growing massive boils on my foot,” Kerry said. “I was crying in pain.”

On April 25, the pain became so severe that she was transported by ambulance to a local hospital. At 8 p.m. that night, a doctor gave her terrible news.

“I’ll never forget it,” Kerry said. “The doctor told me, ‘Honey, if I don’t amputate your right leg, you’re going to die.”

She lost her leg below the knee and spent weeks in the hospital recovering.

“When I got home, I didn’t have a leg,” Kerry said, crying. “It’s still so hard to believe. I had that leg for 41 years and now it’s gone. It’s like somebody I loved died. I’m still grieving the loss.”

Despite Kerry’s terrible loss, she has remained sober. And, thanks to your donations, she has received nonstop support from The Salvation Army and our caseworker, Alisa Ledoux. 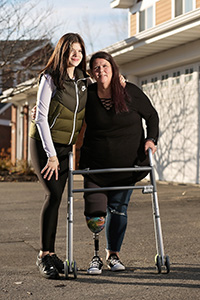 In August, Alisa got Kerry and her daughter (pictured together) into a wheelchair-accessible townhome near their former home. Among other features, the home – which also is managed by The Salvation Army – includes lowered countertops in the kitchen that allow Kerry to cook and clean without assistance.

In addition, Alisa continues to offer practical support, such as making grocery runs for Kerry, supplying furniture, and offering a listening ear anytime Kerry and her daughter need one. Alisa also helped Kerry get her driver’s license, and she is in the process of securing a wheelchair-accessible vehicle for Kerry to drive, with assistance from another nonprofit.

“Alisa is a godsend. Just incredible,” Kerry said. “I wouldn’t be here without her and The Salvation Army.”

Alisa is proud of how far Kerry has come – both personally and spiritually.

“I am so impressed with Kerry’s faith in Jesus,” Alisa said. “Kerry has gone through unthinkable challenges, but with every challenge, she grips tighter to her Savior’s hand for her daily strength. She inspires me.”

Kerry continues to progress in her rehabilitation. She recently received a prosthetic leg and can now stand up with the help of a walker. If all goes well, she will be able to walk on her own in several months.

For the first time in her life, she is optimistic about her future.

“I don’t have much, but I am alive, I have a home, and I have my kids,” said Kerry, who has begun to repair her relationship with her son. “God has a purpose for me.”