Donations in Action: God sees you

The Salvation Army Northern Division and our supporters are adapting to COVID-19 and finding creative ways to serve people and families across Minnesota and North Dakota. 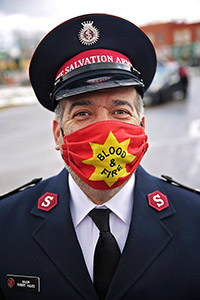 Below are examples of how our officers, staff members, volunteers, and donors are making a positive impact on those affected by this historic crisis.

And the God of all grace, who called you to His eternal glory in Christ, after you have suffered a little while, will Himself restore you and make you strong, firm and steadfast. –1 Peter 5:10

Recently we delivered groceries to an impoverished man who was being temporarily housed in a hotel room. Just before our case worker dropped off the food, she checked in at the front desk of the hotel. The hotel clerk mentioned that she had caught a glimpse of the case worker’s license plate, which read, HESEESU.

Our case worker replied that she and her kids had once experienced homelessness, but they never lost faith because they knew God’s eyes were always on them.

The clerk was astonished. She replied that less than a year ago, The Salvation Army’s rent assistance program had helped her and three kids to avoid eviction. With her home secure, she was able obtain the hotel job she still holds today.

The clerk marveled at this coincidence, and she thanked The Salvation Army’s donors for saving her family from being homeless.

An early childhood teacher from a local public school emailed one of our case workers to request help for a family that did not speak English. The teacher said the family was in desperate need of food but didn’t know where to get any. Both parents had been laid off from their restaurant jobs due to COVID-19. 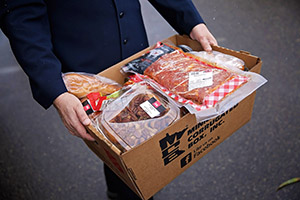 Immediately we scheduled a time for the family to come to a Salvation Army food pantry to pick up all the food they needed. The family stopped by and received a week’s worth of food for six people, plus hygiene items, diapers, and baby formula.

This family was grateful. They now know there is a place they can go to get help anytime they need it.

Ever since the COVID-19 crisis began, The Salvation Army Northern Division has distributed more than 42,000 boxes of food, creating nearly 850,000 meals.

A woman in a wheelchair pulled up to one of our social service offices, after being pushed along by a kindhearted stranger. Her wheelchair was powered by electricity but the battery had run out, making it nearly impossible for her to go anywhere by herself.

Our case worker sprung into action, grabbing an extension cord to recharge the wheelchair. As the wheelchair charged, the case worker gave the woman a snack, and the two of them began visiting. The woman explained that she was in danger of losing her home because she was having trouble connecting with her housing caseworker from a different agency.

The case worker addressed this need as well, tracking down the housing caseworker and helping the woman to resolve her housing issue.

After a short time, the wheelchair was charged up and ready to go. The woman was amazed by how quickly and cheerfully the case worker had taken action to resolve her problems. She left with a recharged spirit.

Minnesota’s first stay-at-home order, issued in March, caused trouble for many people because it was still cold outside and they couldn’t afford to heat their homes.

On one occasion, a father called us and said he was scared to death because the weekend temperatures were going to be below freezing and his propane tank was running on fumes. This man had lost his job due to COVID-19 and his family did not have enough money to pay for a minimum propane delivery. 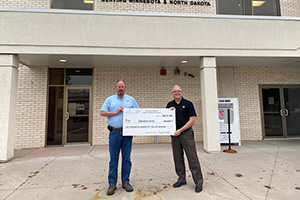 Thankfully, The Salvation Army was able to pay for a propane delivery. The father appreciated the help and was relieved that his wife and children would not have to live in a cold house.

This man was among a growing number of people who have been requesting energy assistance and other help from The Salvation Army due to COVID-19. Recently, the Minnesota Propane Association and its members donated $2,650 toward these efforts (pictured right).