Debra Townsend is proof that homelessness can happen to anybody.

Debra, 67, had done everything right in life. She was a wife, homeowner and successful businesswoman, with ample savings and investments.

“I was a typical suburban housewife, with a full and rich life,” said Debra, who spent years living in New Brighton, with careers as a securities broker, jewelry executive, and bridal consultant.

Less than a year ago, Debra found herself on the steps of The Salvation Army Harbor Light Center in Minneapolis, homeless.

How could this be?

Debra lost everything after a series of unfortunate events that spanned many years. Key events included:

These and other events were compounded by Debra’s incapacitating illness; the deaths of her mother in 2008 and father in 2012; an expensive and emotional family lawsuit; and other difficult hardships.

“I thought I was the strongest person I ever knew,” Debra said. “But everything that had happened brought me to my knees.”

In May 2021, Debra moved out of her friend’s apartment when the friend became involved in a serious romantic relationship. By then, Debra was almost fully recovered from her CFS illness and wanted a fresh start. She found and was offered a job in Kansas City, Mo. But when Debra arrived to start the job, it was no longer available. Stranded, broke and frustrated, she used her stimulus payment to return to Minnesota. 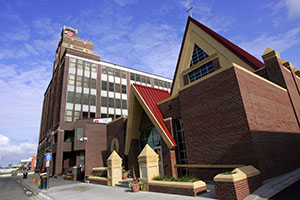 Scrambling to find her next move, a friend-of-a-friend suggested that Debra stay at the Harbor Light Center (pictured) until she could get back on her feet. The six-story shelter is the largest homeless outreach center in Minneapolis, providing food and shelter for more than 200 men and women every night.

“I remember walking into Harbor Light with a few bags and telling them I had a reservation,” Debra recalled. “They looked at me like, ‘What?!’ I was older and college educated, and I’ve never had addictions – I was not the face of homelessness.”

Debra embraced her time at the Harbor Light Center. She would spend the next nine months there healing her mind, body and soul.

“I realized that while I was there, I needed to put my time to good use,” Debra said.

She stayed productive by:

“They are incredible at what they do,” she said. “They will be in my life forever.”

Debra’s time at the center ended in February, when a caseworker helped her find her own apartment in Minneapolis (pictured above).

Today, Debra is fully recovered from her illness and is excited about her life. She wants to begin working again.

“I have never felt more at home than I did at the Harbor Light Center – it was an amazing experience,” Debra said.