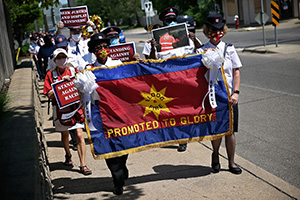 Members of the community joined more than 100 Salvation Army officers and staff members at the South Minneapolis Salvation Army on June 2 for a food distribution and prayer meeting, followed by a nearly two-mile walk to decry racism. (See photos.)

Emotions ran high during the walk, which began at the South Minneapolis Salvation Army and ended outside of Cup Foods, the site of George Floyd’s tragic death on May 25. (Watch the walk.) 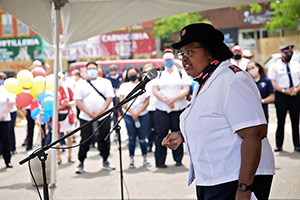 “When I heard that man call for his mother, I heard my own sons,” said a tearful Lt. Col. Patty Richardson (pictured), who leads The Salvation Army Northern Division with her husband, Lt. Col. Lonneal Richardson. “Mr. Floyd’s death was inhumane, it was senseless, and it goes against everything The Salvation Army stands for. But in all of that hurt, we are a people of prayer and we believe there is a God who can heal.”

The walk was led by Salvation Army officers who held a flag that included the phrase “Promoted to Glory” – a term The Salvation Army has long used to describe the death of its church members. Attached to the flag were two large white ribbons that displayed Floyd’s name. 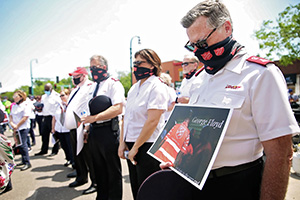 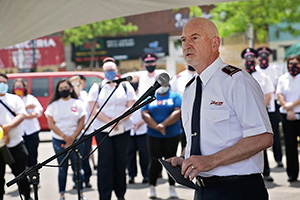 “Racism is fundamentally incompatible with the Christian conviction that all people are made in the image of God,” Bailey (pictured) told the crowd. “The Salvation Army believes that the world is enriched by our diversity of cultures and ethnicities, and considers each life a gift from God – to be cherished, to be nurtured, to be redeemed.”

The Salvation Army is committed to fighting racism wherever it exists and will speak up wherever we encounter it. Read our national statement on this issue. 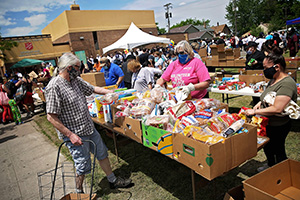 Prior to the walk, hundreds of locals came to eat hot dogs and receive free groceries (pictured) that were donated by the community.

The food was a blessing to a 67-year-old woman named Carol, who has lived in South Minneapolis her whole life.

“I have never seen anything like what’s happened this past week. It’s hurting me,” Carol said. “But I love how everybody is coming together. Everyone is pitching in. It’s wonderful to see.”

Major Robert Viquez, leader of the South Minneapolis Salvation Army, is proud of the way his community has responded to recent tragedies.

“There is more good than bad here,” Viquez said. “The negative stuff doesn’t count. What counts is the whole community pulling together to make Minneapolis greater.”