Fire destroys single father’s home, but not his resolve

Soon after Eric Leist and his son Austin moved to Willmar, Minn., something unthinkable happened: A fire destroyed their home.

On Aug. 13, 2021, everything that Eric and Austin owned went up in smoke: Clothes. Furniture. Photos. Keepsakes. 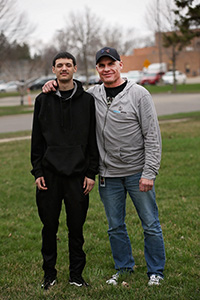 All of it gone.

“It was traumatizing,” Eric said. “The pain does not go away.”

Two months earlier, Eric and Austin moved to Willmar so that Austin could enroll in a respected charter school. Eric had come to Willmar from Los Angeles, Calif., where he dropped everything – including his job as a commercial plumbing estimator – to reconnect with Austin, who had been getting into trouble while living with his mom in Washington, D.C.

“I walked away from it all to help my son – there’s nothing I wouldn’t do for him,” said Eric, who drove to D.C. to pick up Austin, after learning about the charter school from a family member.

Suddenly, Eric and Austin’s new life together in rural Minnesota had been torched. Their only remaining resources were Eric’s car, the money in his savings account, and the clothes on their back.

They moved into a hotel, scrambling to figure out what to do.

Two weeks after the fire, Eric and Austin stopped by the Willmar Salvation Army to ask for help.

“I instantly broke down crying,” recalled Eric, whose savings were dwindling after spending $800 per week on hotel rooms. “My son and I were homeless, with no family or friends in town.” 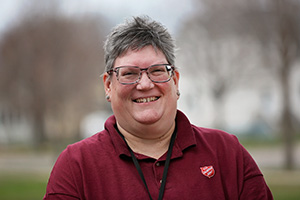 A Salvation Army case worker named Kandi (pictured) assured them everything would be OK. She gave them clothing and connected Eric to several property management companies. Eric also enrolled in a long-term Salvation Army mentoring program called Pathway of Hope.

In a matter of days, Eric had found a new place to live.

“All of these good things were falling into place in our lives, like a puzzle,” he said.

Kandi stood by Eric and Austin for the long haul. During the ensuing months, she saved Eric from eviction by providing rent assistance funds when he was experiencing financial troubles. She also offered nonstop spiritual guidance.

“I had lost my faith for a while, but Kandi helped change my outlook,” Eric explained. “It took our house catching on fire and us losing everything to see the signs of God.” 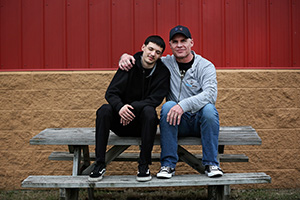 Today, Eric and Austin are doing fantastic. They have a stable home, and Eric recently secured a new job as a special education paraprofessional at Austin’s school.

Austin is loving the school.

“I work well there,” he said. “It’s easy to connect with people and there’s no judgement.”

Eric and Austin were so impressed by the Willmar Salvation Army that they decided to join its mission. They attend church and volunteer there every week.

Kandi is thrilled that she could help Eric and Austin.

“They have grown by leaps and bounds,” she said. “Eric strives to be the best dad he can be and he is a great leader. We love having them here.”