Bills and loose change aren’t the only donations dropped into The Salvation Army’s red kettles during the Christmas season. Every so often, our gracious donors give items that are much more valuable. 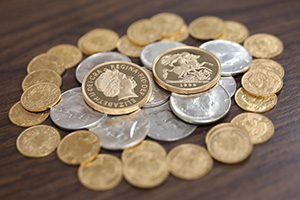 In recent years, gold and silver coins have been discovered in several of the 300 red kettles in the Twin Cities. The coins have come from all over the world, including Great Britain, South Africa, China, and elsewhere. A few examples:

Jewelry is another common find. Some donors decide that their gold bracelets, necklaces, diamond rings – or even gold-filled teeth! – would be better used to help feed or house struggling families.

Paper currency from other countries is donated often. Money from Canada and Mexico is commonplace, with bills from Korea, Iraq, Norway, and the EU also making their way into the kettles – including a $1 million bill from Zimbabwe, valued at close to $2,800.

Sometimes, valuable donations are dropped into kettles accidentally. This past week, we received a frantic call from a man who accidentally donated his St. Christopher medal, a religious piece of jewelry that had great emotional value to him. He was relieved and grateful when the medal was located and returned.

Checks in the kettle are becoming rare, given the rise of digital pay options. That’s why every Salvation Army red kettle now has digital pay options that include Apple Pay, Google Pay, Venmo, PayPal, and QR code scanning. Still, checks do pop up – including one written for an astounding $500,000 in 2015 (read story).

“We’re grateful for every gift found in our red kettles, big or small,” said Lt. Col. Dan Jennings, commander of The Salvation Army’s Northern Division. “I’m sure a lot of thought and prayer have gone into decisions to donate some of these heirlooms and valuables, but we want people to know that all of it goes toward helping restore lives.” 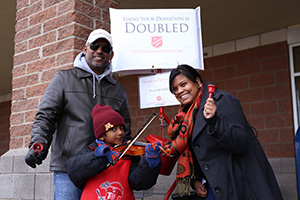 This Christmas season, you can spread joy by ringing bells for The Salvation Army. With four weeks remaining in the red kettle season and hundreds of kettle locations throughout Minnesota and North Dakota, you’re sure to find a convenient time and place to ring. Sign up now.

Most importantly, your time at a kettle will raise money to provide food, shelter and care for people in need. Just two hours at a kettle typically raises about $60 – enough money for The Salvation Army to provide a hot meal and one night of shelter for a person experiencing homelessness.