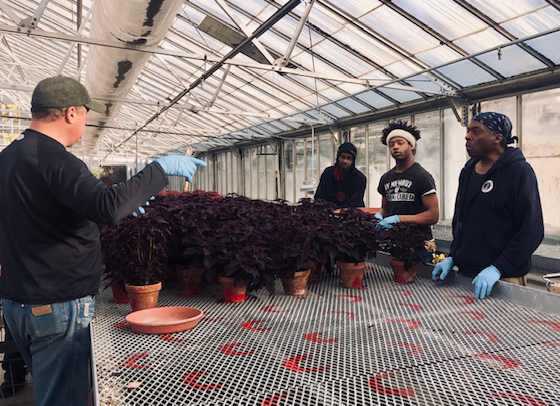 He stands on the street corner in a worn jacket, hood cinched tight, in one hand a cardboard sign with a single sentence written in large letters: “Will work for food.”

Unfortunately this sight is all too common in cities across the country, and Omaha is no exception. According to data compiled in 2017 by the Metro Area Continuum of Care for the Homeless, there are nearly 1,400 homeless people living in Omaha and Council Bluffs. Most of these individuals are chronically unemployed, a problem the City of Omaha and The Salvation Army are determined to address with a brand-new work readiness program.

“A Way to Work" employs homeless individuals two days per week in the city’s greenhouse and parks at a rate of $10.00/hour ($1.00 more than Nebraska’s minimum wage) for a 90-day period, with transportation and lunch provided each workday. Those enrolled in the program also benefit from training and other services, such as counseling, provided by The Salvation Army.

Following successful completion of the program, participants will receive assistance with employment applications and a letter of recommendation and may also have the opportunity for future employment with the City of Omaha’s Parks and Recreation Department.

“A Way to Work” is modeled after a similar program in Albuquerque, which has contributed to the 80 percent drop in unsheltered homelessness in the city over a seven-year period. “We studied the Albuquerque model carefully, and our program builds on it, offering a good wage as well as tools for long-term success and additional resources The Salvation Army is trained to provide,” said Omaha Mayor Jean Stothert.

“We are proud to partner with the city in this exciting new venture,” said Western Division Commander Major Greg Thompson. “‘A Way to Work’ is well-aligned with our mission to give foundational support to the most vulnerable in our community.”