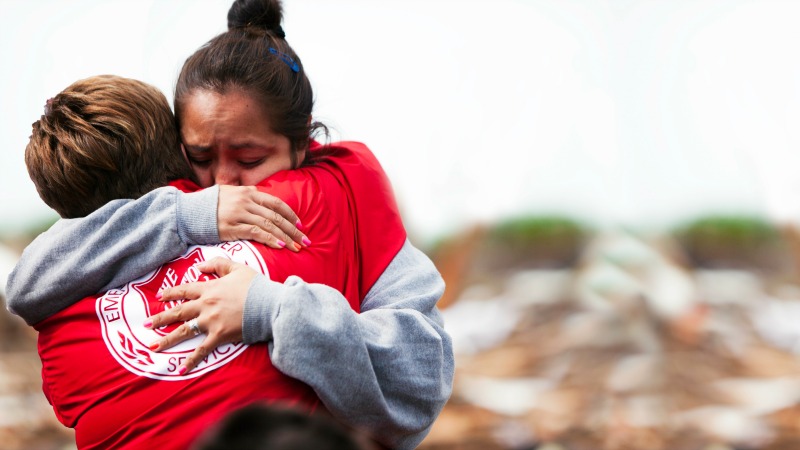 Salvation Army Western Division officers, staff and volunteers have been springing into action across the Division’s three-state geographical area, working alongside first responders and authorities to provide relief to victims of the widespread flooding in the region.

In Norfolk, Nebraska -- Local Salvation Army teams are helping to feed hundreds of evacuees at multiple area shelters. Starting Thursday, March 14, and continuing through lunchtime on Friday, March 15, these teams have worked to assist between 400 and 600 people at the largest of the three shelters, which is located at Lutheran High School, as well as approximately 200 people each at two additional Norfolk shelters. Staff have facilitated donations of food and toiletries for distribution to evacuees and will soon turn to community cleanup efforts now that the local evacuation order has been lifted.

In Sloan, Iowa, outside of Sioux City -- Salvation Army personnel worked a local shelter overnight Thursday, March 14 into Friday, March 15, assisting people affected by flooding in the area. Staff there will now turn their attention to other flooding-related issues around the Sioux City metro.

In Fort Dodge, Iowa -- Local personnel are working to transport approximately 400 flood cleanup kits stored there to Western Divisional Headquarters in Omaha. The kits will be used to support flood-relief operations in eastern Nebraska and western Iowa.

Additionally, as the weekend approaches The Salvation Army Western Division will be watching for additional flooding-related problems around the three-state are, maintaining vigilance in case the flood-relief response needs to change in size or scope, and ready to provide additional support wherever needed.

If you are interested in helping to provide relief to those impacted by the widespread flooding in Nebraska and western Iowa, please visit our flood donation page to make a contribution.