Bedbugs or Frostbite? A Choice No One Should Have to Make This Winter

When you pledge to Bed and Bread Club® you’re not just helping feed and shelter those in need, you’re changing lives.
Join Today | Donate Now

On a recent frigid day, “Ron” stood next to a Salvation Army van in Humboldt Park on Chicago’s west side, eating soup out of a Styrofoam cup. His coat was a fleece hoodie. His hands were bare.

When a Salvation Army staff member, dressed in a parka and insulated boots, asked Ron if he lived in the area, he pointed to a nearby grassy area with a few benches.

“I mostly stay around here,” he said, his voice creating small clouds of condensation. “A laundromat up the street lets me come in and warm up most days. Sometimes the library,” he said, pointing to a stately brick building down the block.

His meals mostly come from the Salvation Army mobile feeding van that stops on this stretch of street every afternoon around 12:45 p.m.

Scraping the last few bites of soup out of the bowl with a plastic spoon, he explained that he’s tried living in shelters.

“The bedbugs were horrible,” he said, echoing a complaint common among the city’s homeless population.

So when temperatures and wind chills drop to dangerous levels – like they did a year ago during the polar vortex, and like they are forecast to do again this winter – those without a place to call home face a choice no one should have to make: bedbugs or frostbite?

Richard Vargas, director of community social services at The Salvation Army’s Harbor Light Center, explains that bedbugs, theft, assault and strict rules keep many people who are homeless away from shelters. Those who do decide to stay often are not allowed to hang around after 5 a.m., a policy to encourage residents to be productive and look for work.

“So, where do they go?” Richard asked, noting that dangerous winter weather narrows the few choices available.

During last year’s polar vortex, temperatures across Chicago, northern Illinois and northwestern Indiana plunged to minus 45 degrees, with wind chills reaching 60 below zero. In those extremes, exposed skin can succumb to frostbite in as few as five minutes. Due to the many dangers, Illinois’ Gov. Pritzker declared a state of emergency.

Bed & Bread Club Is a Source of Warmth and Compassion

While schools, businesses, government offices and public transportation shut down, The Salvation Army ramped up our outreach to the vulnerable populations we serve every day. Our mobile feeding and homeless outreach units made 31 stops throughout the city of Chicago, offering warm soup and transportation to our shelters for treatment or emergency housing.

At the request of the city of Chicago, our Freedom Center served as an emergency warming center, offering overnight shelter to more than 60 guests during the worst of the cold snap. We also provided meal service for the city’s emergency warming centers and CTA warming buses, supplied pallets of materials and food for the city’s emergency shelters and partnered with the city of Chicago to perform well-being checks to those who called 311 to request assistance.

With the help of our Bed & Bread Club© friends, we will be prepared to offer the same array of services again this winter – so people like Ron don’t have to choose between bedbugs or frostbite. 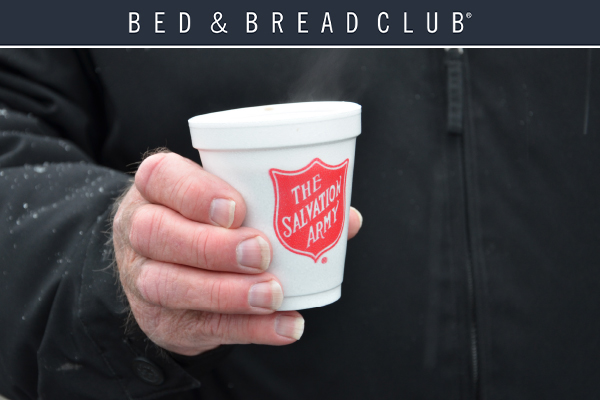 Together, we can fight homelessness and provide a path to a better life.