There are several reasons for the spike – families out of work due to the coronavirus, bare shelves at grocery stores, word getting out about the Joliet center’s food pantry every Monday.

But there is one main reason they were able to meet the huge increase in need: an inspiring team of volunteers, including two men who were very much in need themselves not long ago. 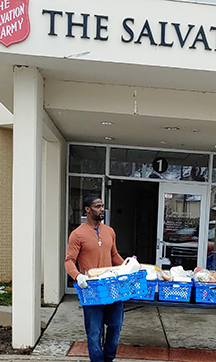 “I just came in looking for a shower,” said Myles Redmond of the day eight months ago when he first walked in the doors at the Joliet facility. He was homeless and someone had told him he could take a shower there. “I was in a bad situation, with the world on my shoulders,” Myles said. “And they embraced me.”

Grateful for their warm assistance, he knew he wanted to give back. So he filled out an application to volunteer that day. He hasn’t left since. For the past eight months, he’s been a daily fixture at the building near downtown Joliet, doing maintenance, keeping the place clean, and assisting with the weekly food pantry.

Myles’ fellow volunteer Novel Woods came to the Joliet center through the courts. “I needed to get my act together and change my life,” Novel said of his life two years ago, when he first came to the Joliet facility. At the time, he was a recovering drug addict and in trouble with the law. Volunteering helped him get his life in order.

He’s since graduated from a drug program and reconnected with his family, changes he largely credits to the Joliet Salvation Army’s presence in his life. “This is the most wonderful place I’ve ever been,” Novel said. “Serving here, I feel like I’m giving back to the people who gave to me.” Like Myles, he considers the Joliet staff and facility more than just a place to volunteer; they’re his family.

“These are wonderful guys,” said Linda Trevino, volunteer coordinator for the Joliet Corps Community Center. “I never have to ask them to do things. They see the need before I can ask. Their help means the world to me.”

Both men volunteer daily at the center, a role that’s taken on new significance with the coronavirus outbreak. “People who come to the food pantry now thank us several times. They say, ‘God bless you.’ It really puts a smile on our face,” said Novel.

Yesterday their food pantry gave out potatoes, apples, milk, cereal, paper towels, toilet paper, and other essentials. The clients, many of them first-time visitors to the food pantry, were all ages and stages of life. “All of them were grateful for whatever we were able to give them,” said Captain Dan Faundez, corps officer at the Joliet facility.

Recently Myles came across a woman driving around looking for a place giving out food. “She looked down on her luck,” he said, so he told her about the food pantry. “Seeing her and all the others come to the pantry makes my day, makes me feel like I have a purpose.”

Novel enjoys the good conversations he has with some of the people who come in for food. “I needed help out there before. Now I’m the one offering the help. That means a lot to me,” he said.

Though the food pantry is only open on Mondays from noon to 3:00 p.m., Captain Dan says they do what they can to help anyone who comes to their door throughout the week. They also recently reached out to a local nursing home to see what help they might need.

Novel recently helped some local seniors when he pulled into a parking lot where many of them board local buses. From the Salvation Army van he was driving, he gave them milk, yogurt, produce, hot dogs, spending nearly two hours giving food to this group who often can’t get to the stores, or are simply afraid to be out in public. “I was in the area at the right time,” he said, a feat he plans to accomplish again.

Captain Dan said he hopes the Joliet facility can be an oasis for all who come to them for help. “Sometimes what gets you through the day is one small interaction,” he said. “When we get to be those conduits for God, we love that.”

Their facility has a rich history of making that kind of impact – the kind of impact that’s especially needed right now. Just ask Myles, who calls the place and the people in it “everything” to him. And Novel, who says from firsthand experience, “We can get through this together.”