Shanticia Ferguson and her 9-year-old daughter Aiden have been on the road more often than they expected this year. Aiden has spastic cerebral palsy. While she used to experience sporadic, short seizures, the attacks have been longer and more frequent in recent weeks.

“In the last two months she’s had four seizures. And she usually has one a year, and it lasts maybe two minutes,” Shanticia said. “These seizures have lasted 15-20 minutes and more.”

The seizures have meant numerous trips from the Fergusons’ home in Rockford to a children’s hospital in Chicago. Aiden needs help to move, and as she’s grown, it’s become more difficult for Shanticia to help her in and out of the car.

“Aiden didn’t have a safe way to travel. With her seizures it’s just unsafe,” Shanticia said. 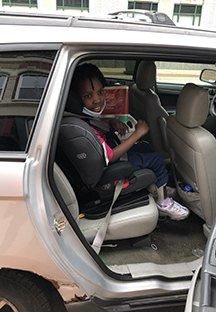 Shanticia, a mother of three and Pathway of Hope client, asked The Salvation Army for help. Major Margaret Hill, social services chaplain for The Salvation Army of Rockford and Winnebago County, worked with the team at the Army’s divisional headquarters to research options for a custom car seat. Aiden needed something that she could not only fit into now, but also well into the future.

Major Hill and Salvation Army Emergency Assistance Case Management Director Akeya Harper identified a local business that could help. Together with the Rockford Orthopedic Alliance Company, they worked on making the custom car seat a reality. The result was a seat that could accommodate a child up to 58 inches tall and included a swivel base, to allow Shanticia to help Aiden into the car with greater ease.

“This will provide us a safe way for her to travel,” Shanticia said. “It means when she’s in the back seat her head is protected more, and she has that stability.”

The Salvation Army presented Shanticia and Aiden with the custom car seat in an informal but emotional ceremony. The team from Rockford Orthopedic Appliance Company showed Shanticia how to install the car seat and buckle Aiden in. The gift brought Shanticia to tears.

“We were expecting the car seat, but you guys went above and beyond, and you blessed us and I don’t think you realize how much of a blessing you have been. Knowing that someone else is praying for your child or knowing that you have such a great team behind you, it’s just blessed.”

“It was very heartwarming to see that reaction, both on the child’s face and the mother’s,” said John McFarland, owner of Rockford Orthopedic Appliance Company. “We are committed to our customers and our physicians who send patients here, they do come first, and same with this family.” 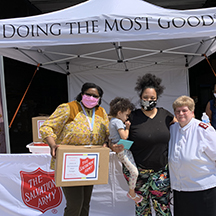 Aiden can now ride in the family’s minivan safely and comfortably. Major Hill said that’s what the Pathway of Hope program is all about: identifying the unique needs of each family and determining ways to meet them. A recent grant from the Lilly Endowment to The Salvation Army made the nearly $2,600 car seat possible.

“Many families have lost hope because they don’t see where their needs are going to come from, or how they’re going to be met,” Major Hill said. “The Salvation Army does not want people to lose hope. We always want people to have hope and to remind them there is a pathway to hope. This program helps families see that they can have hope in this situation.”

Earlier in the week, five Rockford area families, including Shanticia’s, received COVID relief packages and gifts cards worth up to $700 each. Each kit contained household items such as paper towels, bathroom tissue, laundry detergent, and all-purpose cleaner, as well as toiletries like deodorant, shampoo, and conditioner.