"The Salvation Army Has Been with Us Since the Beginning" 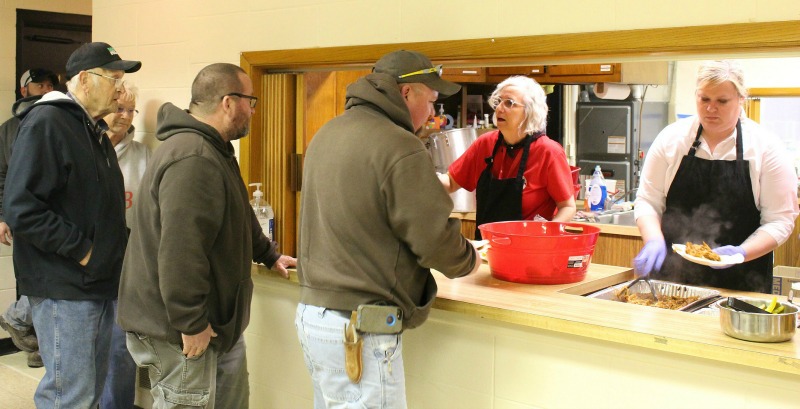 When Paula Thoele saw images of the flooding in Nebraska, Iowa and South Dakota on the news from her home in Savanna, Illinois, she knew she wanted to help. “I can’t afford to give a lot of money,” she said, as she wiped tables, squeezing a sponge into a bucket of hot water. “But I can give my time and my energy.”

Thoele connected with a team of Salvation Army volunteers from Cedar Rapids, Iowa, who, along with additional volunteers and Salvation Army officers from Des Moines, Mason City, Ames and Fort Dodge, Iowa, traveled to Hornick, Iowa, where they joined Sioux City corps officers and staff to help with flood relief. 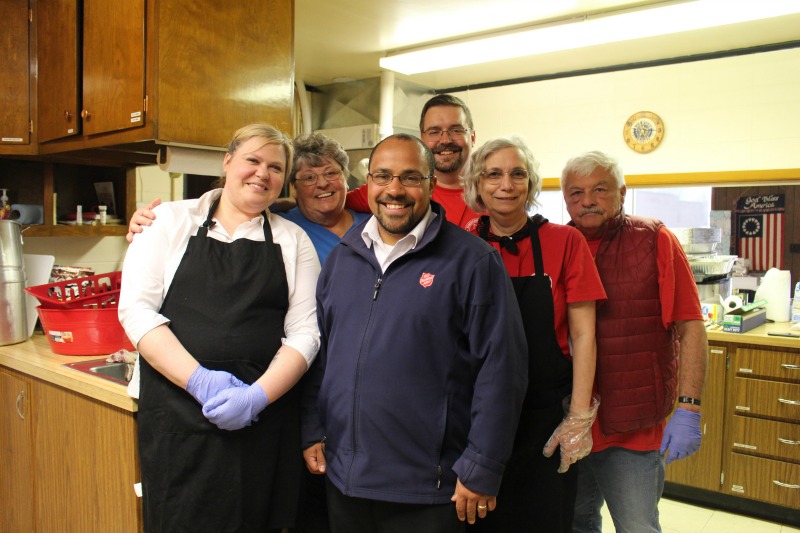 Hornick was flooded on March 18 when a levee was breeched on the West Fork of the Little Sioux River, a tributary of the Missouri River. All 250 of the town’s residents were forced to evacuate. When residents returned to town four days later, most discovered their homes had suffered extensive damage. Many houses had up to 7 feet of water inside – furnaces, water heaters, water softeners and other appliances were destroyed, furniture and clothing was ruined, power was out and plumbing wasn’t functioning.

Paula and Chuck Rose, who had been in Texas when the town flooded, lost everything. “When we opened the front door, we knew it was gone,” said Paula, her eyes filling with tears. The family room, kitchen, bedrooms, even Chuck’s tools were all covered in thick mud.

The Roses are temporarily living in a trailer on the edge of town until they can figure out what’s next. They and most of their Hornick neighbors meet for lunch and dinner at the American Legion building, where The Salvation Army has established a makeshift flood-relief headquarters. “I will never pass another red kettle again without remembering The Salvation Army and their support and generosity during this experience,” said Paula. “The Salvation Army has been here with us non-stop from the beginning. They are absolutely amazing.”

“We can’t thank the volunteers enough,” said longtime Hornick resident Loretta Prichard. “The meals The Salvation Army volunteers are cooking for us are better than you’d get at any restaurant in Sioux City,” added her husband, former Hornick councilman Jake Prichard. “We are so grateful.”

Hornick hasn’t experienced this kind of flooding since 1960. When they first arrived, Sioux City Corps Captains April and Chris Clarke went door-to-door assessing needs and helping to keep residents hydrated as they began the laborious clean-up process. “Seeing the extent of the damage hit me hard,” admitted Captain April, whose own home in Sioux City was damaged by flooding. “I’m supposed to be the strong one, but it choked me up. It’s absolute devastation.”

In addition to supplying food, water, gift cards to home improvement stores and financial assistance, the Clarkes and their team provided childcare when the residents met for an emergency town hall meeting. “We rented a bounce house, did crafts and played football with the kids,” she said. “That way the parents could focus on the meeting without worrying about watching their kids or finding someone to babysit.”

The Salvation Army also delivered fans that residents have used to hasten the drying process. “They put two pallets of fans out on the side of the street, and when those were gone, they delivered another pallet,” said Jake.

“We truly can’t thank The Salvation Army enough,” added Loretta. “I really don’t know what this town would have done without them.”