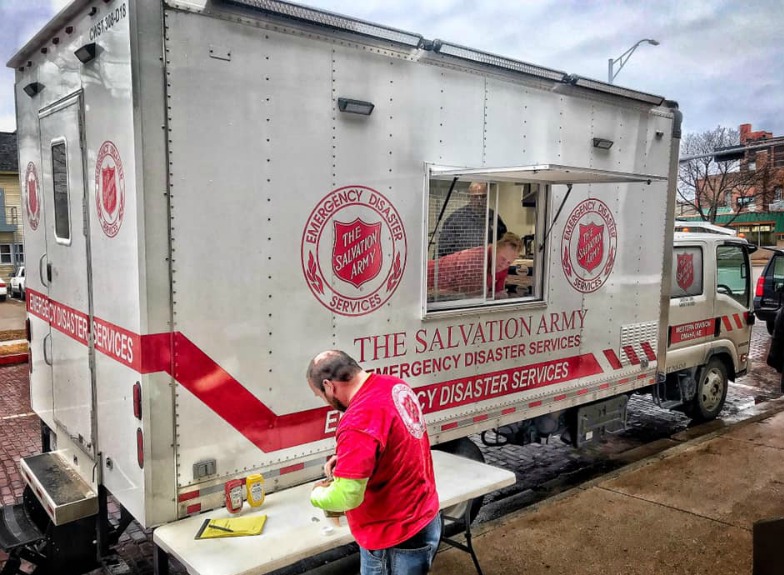 Canteens -- also known as mobile feeding units -- are on the move for The Salvation Army in flood-affected communities around eastern Nebraska and western Iowa. When disaster strikes, these specially equipped vehicles bring food, drinks and other essentials to those in need.

Deployment of our canteens is just one of several main storylines within The Salvation Army Western Division’s continued flood-relief response. Here are some additional highlights from around eastern Nebraska and western Iowa:

In Fremont -- The team worked alongside a special nonprofit group to serve food to approximately 325 people via a canteen stationed in town. A second canteen served food in nearby Hooper, Nebraska.

In Valley --  A truck with flood-relief supplies is scheduled to arrive in town on Thursday, March 21.

In Council Bluffs -- The team prepared for a deployment to Hamburg, Iowa, where they will help with flood-relief and -recovery efforts beginning Thursday, March 21 or Friday, March 22.

In Omaha -- As of midweek, the Kroc Center had served nearly 300 meals via their kitchen. The team has also been providing emotional and spiritual care. In addition, the flood-relief-items donation center at the old Canfield's near 84th and Center continues to take in donations of flood-relief items.

In Sioux City -- Officers, staff and volunteers served 100 breakfasts and 800 snacks in flood-affected communities near the Sioux City area. They also handed out toys to flood-affected families with young children and provided emotional and spiritual care to dozens of people.

In Norfolk -- The team spent much of Wednesday, March 20, distributing clean-up kits, hygiene products and mattresses.