The museum features five exhibit galleries, which includes one permanent exhibit and four rotating exhibits, and research room open to both Salvation Army members, researchers and the public.  Tours of the museum are guided and available Monday – Friday between 8am – 4pm. Please note on-site research is available by appointment only.

MIDWEST ON FIRE: THE SALVATION ARMY IN THE CENTRAL TERRITORY

This permanent exhibit showcases a wide variety of objects and images which provides a look at the Salvation Army in the Central Territory from when it opened fire in 1880 to the present.

FROM TRENCHES TO TRIUMPH: THE SALVATION ARMY ANSWERS THE CALL OF HUMANITY IN WWI

World War I was a watershed event for The Salvation Army in America. The efforts of National Commander Evangeline Booth and her staff enabled the Army to send Salvationists overseas to combat zones, even to the front lines. While their numbers were a fraction of those sent by other aid organizations, the impact of the humanitarian aid offered by the Army to the troops was immeasurable. The lasting result was the complete transformation in American public opinion toward the Army, permitting it to grow into the aid organization we know today. This exhibit traces the efforts of those Salvationists engaged in war service and shows their lasting impact.

JEWELS IN THE CROWN: TREASURES FROM THE COLLECTION

This exhibit showcases special artifacts in the museum’s collection and tells the often untold stories that make them unique.

Girl Guards have provided thousands of girls with a Christian based character and skills building program since the program’s founding in 1915. This exhibit celebrates the program and shows how it has grown and evolved over the years and adapted to the needs of contemporary girls while still remaining true to its roots.

THE ART OF INSTRUMENT MAKING

Salvation Army Music and Instruments
Thursday, July 27, 1-3pm
The Salvation Army has long been known for its love of music.  Learn about the instruments played by Salvation Army musicians.  Make your own timbrell (tambourine) and learn how to play it.

Salvation Army Camp Crafts
Thursday, August 17, 1-3pm
The Salvation Army owns and operates 11 camps in the Midwest which offer a wide variety of programs for kids and adults.  Try your hand at making some popular camp crafts during this make-and-take program.

The museum collects those items which relate to its mission and which it can use for exhibition, education, or the documentation of other objects in the collection, and those items for which it can provide an appropriate level of care.

The museum is always seeking donations to the collection. Please call, email or write to us if you have any items you would like to donate.

The museum makes its collection, archives and reference materials available to on-site researchers by appointment.  Museum staff may also assist with requests from remote researchers who are unable to conduct their research in person.  Please call, email or write to us with information about your research project and questions.

Material in the collection which may be useful to researchers includes, but is not limited to: 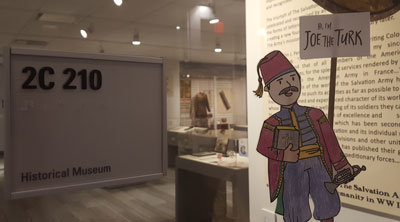 Visit our online collections database and browse dozens of digital files that have been archived for viewing right from your computer, tablet or phone.

Visit the collection at:
https://sacentral.pastperfectonline.com/

Use the interactive timeline below to explore serveral historical Salvation Army events from around the world and here in the Central Territory.