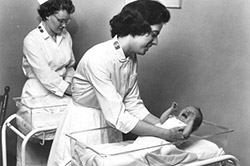 “When they all cried at the same time, I wanted to cry with them,” joked Marion, 74, a retired widow who still lives in Minnesota.

Today that facility is a Salvation Army youth housing program called Booth Brown House. On the outside, the building looks the same as it did when it was built in 1913 – a beautiful brick mansion on Como Avenue, one block east of the Minnesota State Fairgrounds.

On the inside, not much has changed, either: “Our focus of working with young people remains the same after an entire century,” said Major Arnel Ruppel, Booth Brown House administrator. “This facility has always served youth dealing with issues relevant to their time. Today, the issue is youth homelessness.”

Here’s a brief history of Booth Brown House, a historic St. Paul landmark that’s been changing kids’ lives for 100 years. A 100 year anniversary celebration is planned for Thursday, Oct. 17 and will be open to the public. 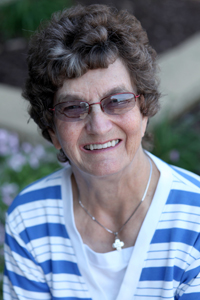 Both hospitals always had a hard time keeping up with demand. Booth Memorial Hospital – named after Salvation Army founder William Booth – was built after two well-to-do brothers witnessed one of the original maternity hospitals in action and wanted to help the program expand. According to Salvation Army historical records, the brothers liked what they saw and were “especially impressed that (the hospital) provided services to a Jewish girl ‘in trouble’ without question.”

The brothers built Booth Memorial Hospital for $50,000. The 19,000-square-foot facility opened with a capacity to serve 50 women and 35 infants – twice the number of women and almost four times as many infants as the previous hospital.

The hospital’s busiest decade was the 1960s, when an average of 38 women lived there every day. They could stay up to six months before giving birth, with most babies delivered by University of Minnesota obstetricians.

Marion and other Salvation Army nurses loved their jobs. The symphony of shrieking babies, piles of stinky diapers and fountains of spit-up didn’t bother them one bit.

“I’ve always loved giving care to people, shedding light on them so they can feel blessed,” affirmed Marion, who worked at the hospital four years before moving on to a lifelong career in geriatrics.

From 1898 to 1971, Booth Memorial Hospital and preceding Salvation Army maternity hospitals in St. Paul served a total of 13,500 unwed mothers, with about 75 percent of the babies placed for adoption. That’s an average of one baby born every two days for almost 75 years. 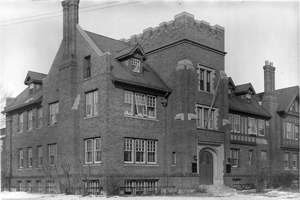 The maternity hospital closed in 1971. Patient numbers had dropped dramatically “due to the changing political climate and the way unwed mothers were viewed by the public,” according to Salvation Army historical records.

The Salvation Army immediately converted the facility into a residential treatment center for teenage girls with emotional and behavioral disorders. Renovations were made to accommodate the girls thanks to a $400,000 donation from the estate of famed Minnesota civic leader Earle Brown.

The facility was renamed Booth Brown House Services in 1974. It offered treatment for up to 16 girls ages 13 to 17, plus a 20-bed girls’ emergency shelter.

Debra Wilken, Executive Development Director for The Salvation Army Northern Division – a woman responsible for raising millions for Salvation Army programs in Minnesota and North Dakota – started her career at Booth Brown House as a youth aid in 1979.

“God’s love shined through every aspect of Booth Brown House’s ministry and it was unstoppably contagious,” Debra said. “As I witnessed the resiliency of the girls we served in the safe and loving environment of Booth Brown House, I knew I wanted to invest the rest of my life in fulfilling the mission of The Salvation Army.”

Booth Brown House remained a girls-only facility until 1984. Services for boys were added that year, including a residential treatment program and a separate 10-bed shelter.

During the next 30 years, Booth Brown House expanded by adding more housing units and offering services to young adults in their early 20s. Though its emergency shelter closed in December 2010 due to lack of funding, it reopened in June 2012 thanks to a grant from the Otto Bremer Foundation. 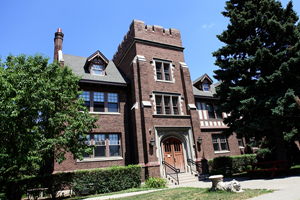 The Booth Brown House of today has grown to become a 43,000-square-foot fortress of hope for kids and young adults in crisis. It includes an 11-bedemergency shelter for youth ages 18 to 21, plus 35 housing unitsfor youth ages 16 to 25.

Shelter residents stay up to 30 days and receive a safe place to sleep, eat and regroup from street life.

The housing wing includes 25 units of permanent housing and 10 units of transitional housing, where guests stay up to two years. Each unit is an efficiency apartment with its own kitchen and bathroom. Residents have limitless access to Salvation Army case managers who offer life skills training aplenty: cooking, financial training, job searching, tutoring, and referrals to other service providers.

“Each morning as I arrive at Booth Brown House and see this castle-like fortress, I am reminded the primary purpose of a castle is to be a sanctuary, a place of safety, protection and healing,” said Major Arnel, who’s led the facility since 2008. “I’m proud to say The Salvation Army has provided that care to youth in need for an entire 100 years.”