Summer Camp for the Young at Heart

Seniors Camp has been a mainstay of The Salvation Army’s summer offerings at Wonderland Camp for decades. This annual gathering offers people 62 and older a chance to enjoy fellowship, preaching, and activities such as archery, water aerobics, fishing, hayrides, pontoon rides, games, movies and even a spelling bee. This year’s Seniors Camp ran from June 3-6 and we stopped by for a day to get in on the fun.

It’s 9:09 a.m. and people are still rolling into the chapel service that began a few minutes ago. It’s okay because we're at camp, and there’s grace. Major Debra Dalberg is leading the 250-plus seniors in singing “It’s Summertime in My Heart,” a short chorus about the difference Jesus makes to those who believe. “When it’s wintertime, it’s summer in my heart,” the mostly female voices sing. 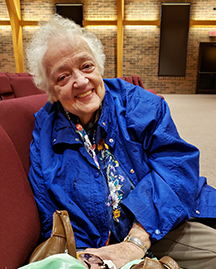 Those gathered here for The Salvation Army’s annual Seniors Camp have clearly known their share of “wintertime.” The entire back row is a parking lot of walkers and wheelchairs. Others have literally leaned on friends as they made their way to their seats. Lined faces speak to years of both laughter and tears.

Rita, an 81-year-old from Oak Lawn, sits on the middle aisle in the second row. Her face is practically beaming. “I was almost positive I wasn’t going to make it this year,” she said. “But the Army got a new bus this year.” This made it possible for Rita, who has artificial knees and shoulders, to make it to this camp she calls “a holy place.”

Rita has been coming to Wonderland Camp, nestled between two lakes just over the Wisconsin border, for 15 years. Practically everyone here, the regulars anyway, know Rita by name. After a lifetime of abuse and neglect, she found faith in a God who transformed her life and regularly inspires her to burst into song. She’s known for that at Seniors Camp, too.

“Coming here is like a reward from Jesus,” she said, calling it a rest from dealing with her many physical ailments and family issues. “I wish you could bottle this joy and share it.”

Major Dalberg has been leading Seniors Camp for the past 14 years. Rita calls her the “holy glue” that keeps the camp together and strong. Major Dalberg’s primary hope for all the campers is spiritual refreshment and a chance to renew their relationship with God. “Secondly, I would hope they would be able to simply relax in an outdoor environment – carefree and fear-free,” she said. “Look at the stars, smell the fresh-cut grass, swim, take a pontoon ride, enjoy life!”

Wanda agreed to come to Seniors Camp on one condition. “I told my friend,” she said, referring to the woman who’d been badgering her to come for years, “’If it’s not fun, I’m gonna kill you.’” She laughs. Wanda is sitting at a table with three other women from around the Chicago area, all drawn to an indoor activity this morning by the rain. They are coloring intricate pictures of owls and flowers with colored pencils and chatting about what they like most about camp so far. Wanda’s enjoying the camaraderie. “Everyone’s been so open and authentic,” she said. “And the church service was dynamite.” Her friend, thank goodness, will live to see another day.

Glenda, one of Wanda’s coloring companions, is here for the third time. The chapel services and many fun activities inspired her to come back. This response is not unusual for the veteran campers. “Everyone seems to really enjoy chapel – sharing testimonies of God's working in their lives, singing together and good preaching,” said Major Dalberg. “Then there's BINGO, favorite by far, followed by just about anything we have to offer. Crafts are well-attended, the spelling bee has great participation, and the wagon rides around camp and the pontoon rides on the lake are pretty much on the top of the list for everyone.”

Glenda chose coloring this morning, over other options like archery, checkers and fishing, because she finds it peaceful. All four women at the table are veteran colorers. Martha started when her son bought her a coloring book. Wanda started coloring during a hospital stay. Today they’re all enjoying the chance it affords them to chat with one another as they fill in their masterpieces. 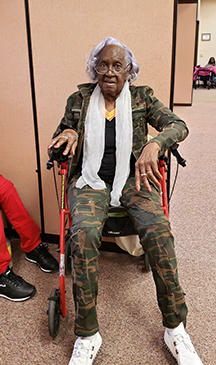 Next door the line dancing is in full swing. The 82-year-old caller is leading the large circle of women in the Hokey Pokey, a crowd-pleaser as it’s an easy one to follow. Some women still wind up face to face with their neighbor when they’re all supposed to be facing the same direction. They laugh, call out directions to the confused ones, keep moving. That seems to be the secret: Just keep moving.

Off to one side of the room sits Lueller, a 94-year-old from Chicago. She’s dressed head to toe in camouflage, but her lavender hair is hard to miss. Lueller’s been coming to Seniors Camp for 15 years. Her 74-year-old daughter, Mary, brought her this year, driving from Lansing, Illinois, to pick up her mom and get her here. She smiles as she looks over at her mom, who’s sitting in her walker and moving her feet to the music.

“This year we had an entertainer who previously performed on a cruise ship,” Major Dalberg said. “He was an absolute hit and really engaged the campers in singing songs from the past, line dancing and doing the conga line. It's fun to see such free-spirited participation.” 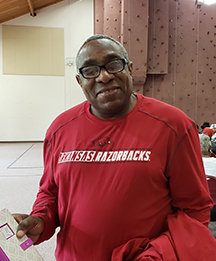 After lunch, bingo commences in the Sharp Center, a big gym with a climbing wall. Today the room is crammed with tables of seniors, bingo boards and beads at the ready. There’s a table of prizes – cutting boards, jewelry cases, warm socks – off to the side inspiring them all to be attentive.

Melvin, a 63-year-old from Chicago, is one of the first winners, and one of the few men at Seniors Camp. Of the 276 campers, only 25 are men. Melvin didn’t know the odds would be so much in his favor. This is his first year at Seniors Camp; he came at the invitation of a church friend. He also didn’t realize the camp was affiliated with The Salvation Army, but is delighted when he learns this. “I used to drive a food truck for The Salvation Army years ago,” he said. He loves that the Army offers a camp for seniors. “I just wish it was more than once a year.” While he’s more of a chess guy, he made an impressive showing at bingo. 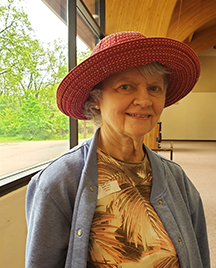 Mady, a 74-year-old from Carol Stream, is also a first-timer, here with a friend who’s been coming to Seniors Camp for 16 years. Mady has supported The Salvation Army since she was a little girl, at first dropping coins in the red kettles at Christmas and in the past ten years sending checks in the mail. She had no idea the Army’s Metropolitan Division ran this camp over the border in Wisconsin. “I’ve enjoyed meeting so many different seniors,” she said, noting that she finds those in attendance with walkers and wheelchairs inspiring. “It’s not holding them back one bit. That’s wonderful!”

The Art of Fellowship

Over in the crafting room, Darlene Humphrey, Seniors Center Supervisor at the Army’s Kroc Center in Chicago's West Pullman neighborhood, is showing a table of women how to paint the puzzle pieces they’ve just glued on a sheet of construction paper. “I know they need relaxation and fellowship,” she said of the many campers, about 70 of whom are from Kroc.

When she’s not at Wonderland Camp, Humphrey works with 2,000 seniors at Kroc, planning activities, scheduling workshops, and facilitating groups of vets, retired nurses, and former ministers. “Loneliness is a serious issue for seniors,” she said, speaking from experience. “First timers are always blown away by the beauty, relaxation, and fellowship here.”

As if on cue, Shirley, a 62-year-old from Englewood, chimes up: “I’m having a great time!” She’s finished her puzzle-piece art and has moved on to making a cross necklace, a memento she will treasure when she returns home. “Everyone here is so friendly,” she said. “I’ll definitely be back next year!”