It’s that time again, when old family traditions continue for another year, whether it’s decorating gingerbread houses, sipping steaming mugs of peppermint hot cocoa by the fire, or putting a star atop the perfect tree. For families in Southeastern Wisconsin, there’s a tradition that’s a little bit different, and that is because of one very special bell ringer.

Tinker, affectionately called Tink by his owner Carol Tackas, is a 22-year-old miniature horse with a very special and unique talent: he is able to ring the bell for The Salvation Army’s Red Kettle Campaign.

The way Tackas came to own Tinker is as unique as Tinker himself. Tackas and her husband bought a house and land from a man who owned miniature horses. Tackas thought the horses were all so cute and asked that a horse be added to the deal. The seller had one horse he was willing to part with and that was one-year-old Tinker.

“Well, we bought Tinker and you know, the house came with him,” Tackas said with a laugh. 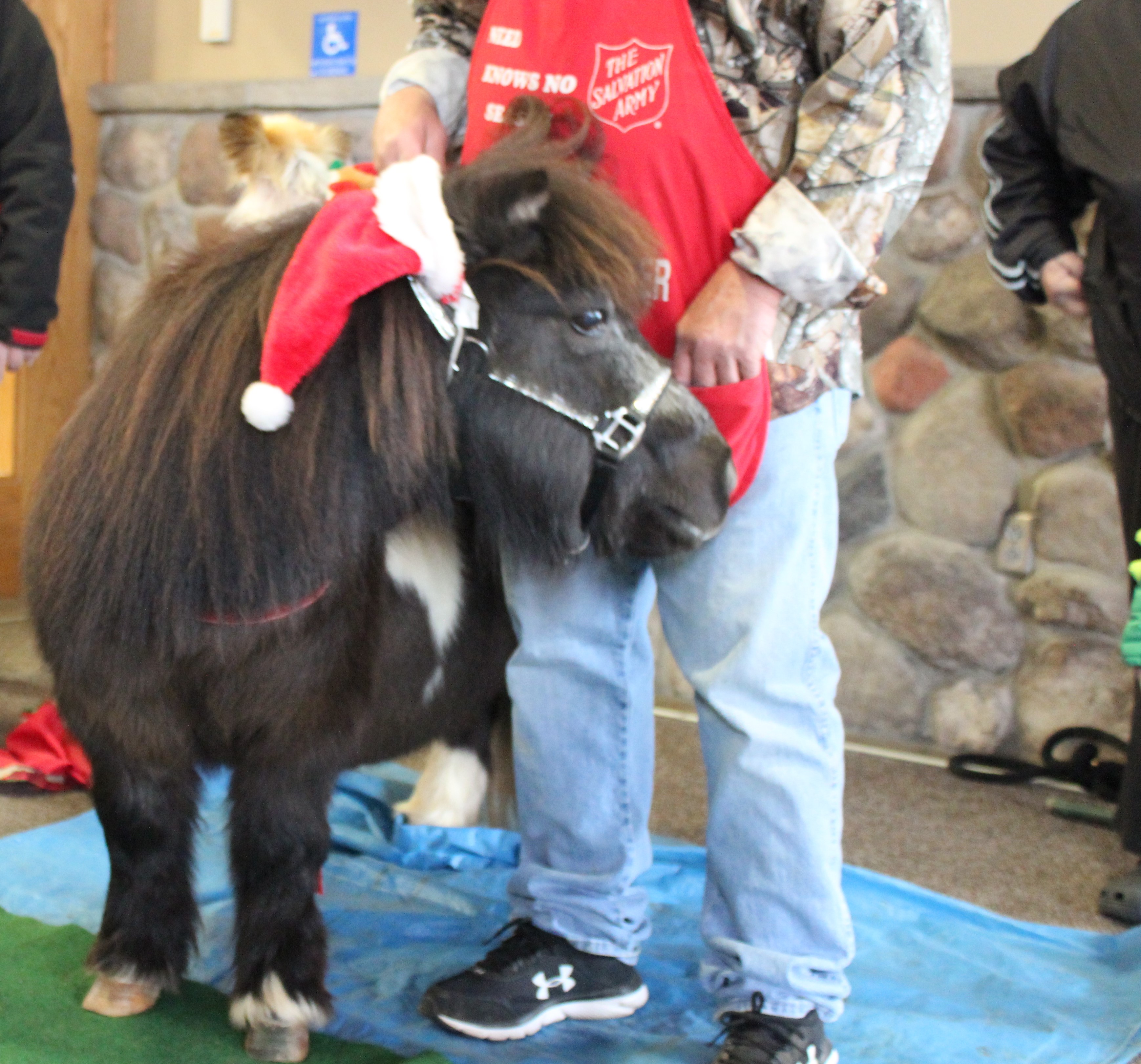 Tinker didn’t begin learning to ring the bell until years later, and it was all Tackas’ idea. One morning in 2008, Tackas walked out of a Walmart and there was a bell ringer standing there. Tackas gave to the Red Kettle because, “I believe in The Salvation Army with all my heart,” she shared.

When Tackas got to her car, she started to wonder if she could put a twist on it and teach Tinker to ring the bell at the Red Kettles. After all, Tinker already knew about 20 other tricks, all taught to him by Tackas over the years. Adding another to his repertoire shouldn’t be too difficult.

Tinker has always been very apt and capable, so learning to ring the bell itself took only about nine to twelve months. Tackas said the most difficult part was training Tinker to stand between her and her husband and not be skittish in public. To do this, Tackas took Tinker to nursing homes once a week, and on walks in neighborhoods to acclimate him to being around people and not get spooked.

Tinker can be seen ringing his bell for The Salvation Army’s Red Kettles at various locations around Southeastern Wisconsin all season long, and he won’t be alone. His friend Ta’lu’la, a small, adorable pup, will be sitting on his back, helping to spread the Christmas cheer. No matter what kind of day someone is having, it’s impossible to not smile when Tinker is seen outside the store, ringing the bell, with Ta’lu’la sitting atop him. 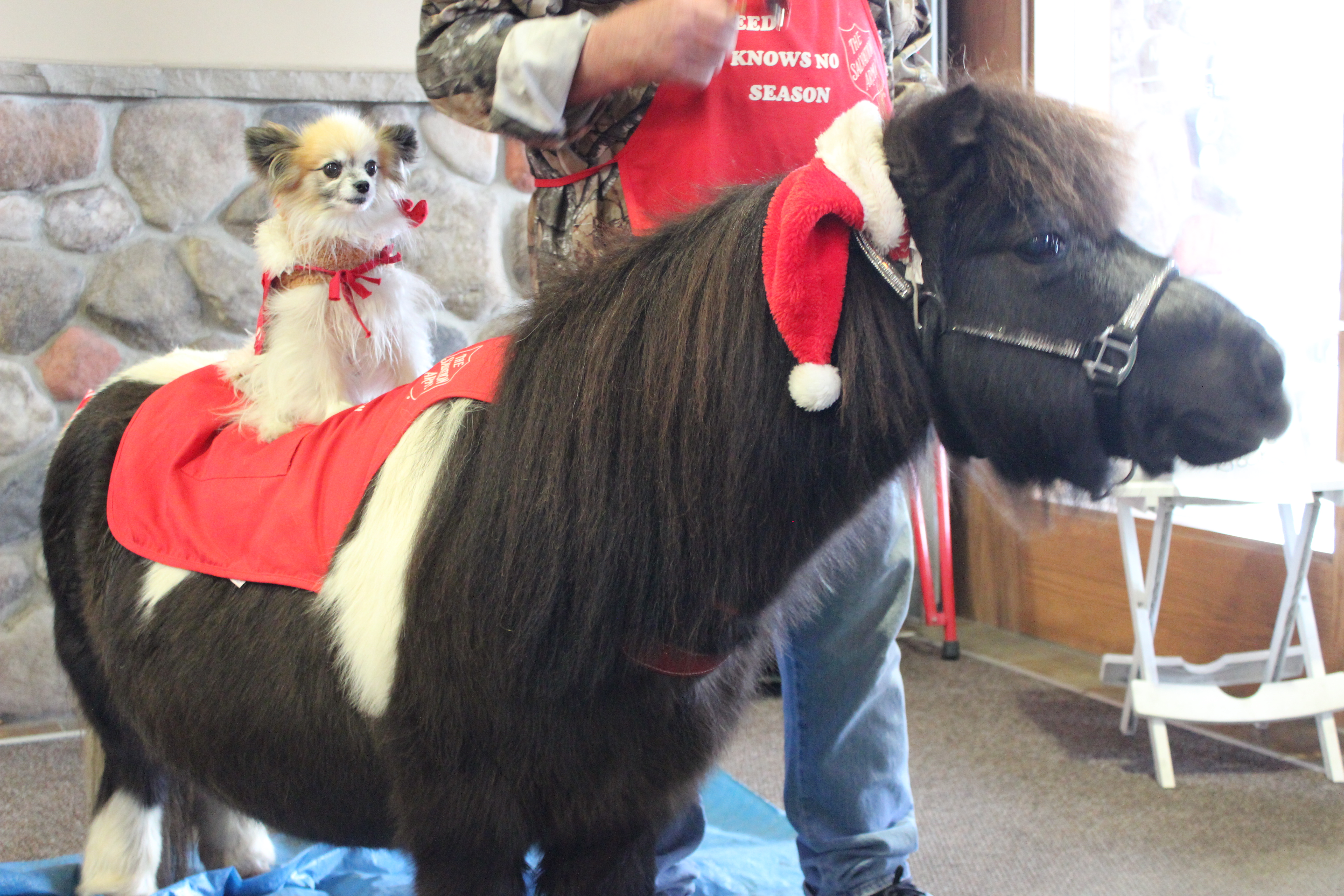 Tinker loves seeing the children and is so tolerant of all the attention and hugs and kisses he receives throughout his time bell ringing. Tinker and Tackas have met a lot of people over the years. Tackas got particularly emotional when speaking of her encounters with veterans while ringing the bell with Tinker and hearing their stories of how The Salvation Army was there for them through thick and thin.

“It just brings tears to my eyes because that to me is huge, really huge. I can’t even talk about it without getting teary right now,” she said.

Tackas said she never expected Tinker to become as popular as he is or get as much media attention as he has received, not even in her wildest dreams. Tinker was awarded Horse of the Year at the 2017 Midwest Horse Fair held in Madison, which was an incredible honor. Tinker received this title in large part due to his work with The Salvation Army and the popularity that has come with it.

Last year was Tinker’s tenth season ringing the bell and manning the Red Kettle for The Salvation Army, but because of the COVID-19 pandemic, Tinker didn’t get to celebrate it. Tinker and Tackas are excited to be back out this year and helping The Salvation Army in “Doing The Most Good” all season long.

“He’s an amazing little creature and I’m so blessed to have him,” she said. 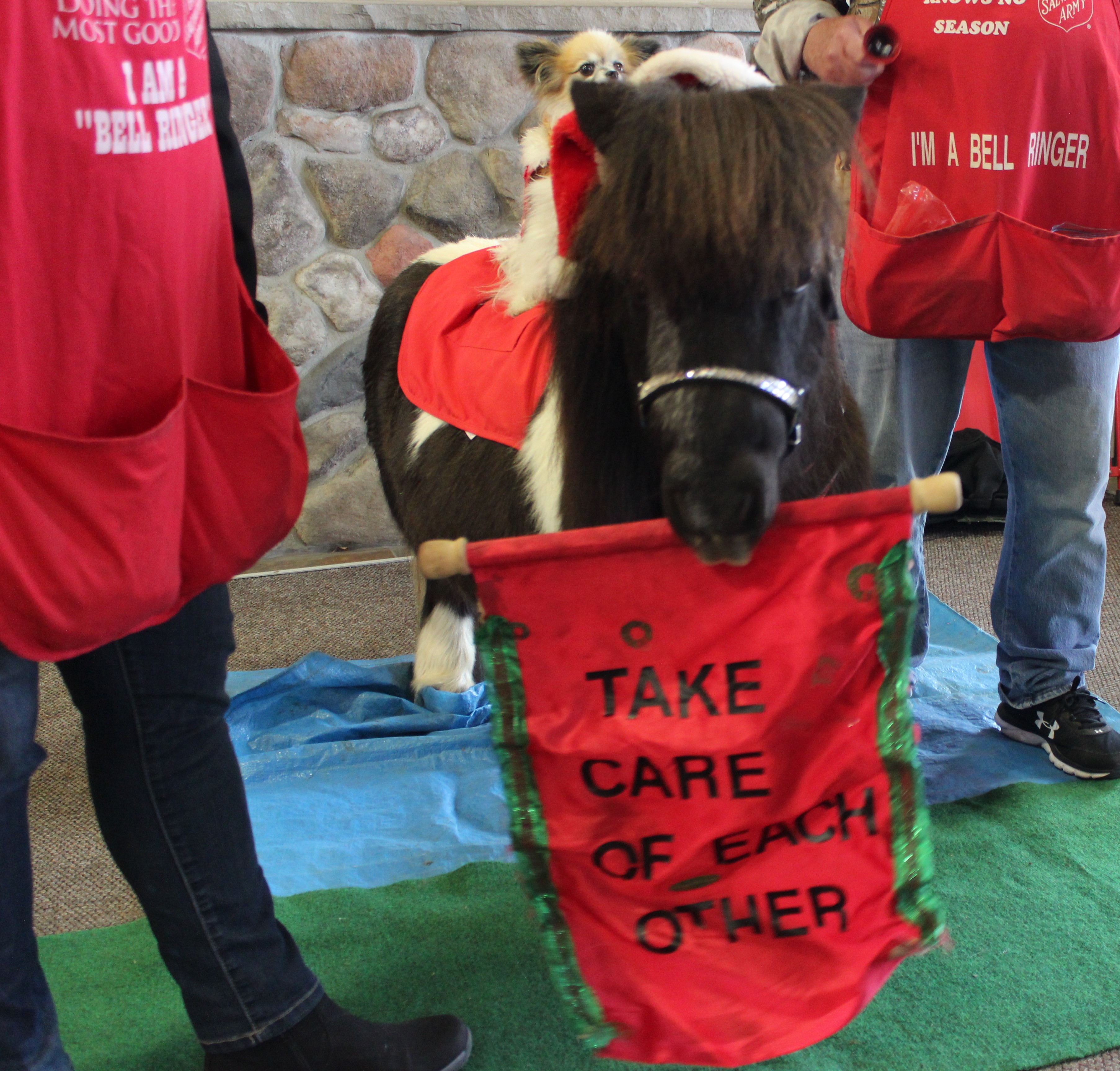 Tackas said she is grateful that she thought to teach Tinker to ring the bell because of how gratifying it is to see people come to the store and be amazed at Tinker’s special talent.

“Having people come up and say ‘Thank you so much for doing this and giving to The Salvation Army, it’s just a thrill. It’s absolutely a thrill,” she said.

Seeing Tinker ring the bell isn’t just an unusual sight to see. For many families in Southeastern Wisconsin and The Salvation Army of Wisconsin and Upper Michigan, “Christmas isn’t Christmas without Tinker.” Tinker is more than just a miniature horse with a special talent. Tinker is tradition.