How Gregorio Wound Up Living Under the Kennedy Expressway

Gregorio lives in Logan Square, down the street from an XSport Fitness and a store called Olde Chicago Antiques. His home is located conveniently close to the Kennedy Expressway (I-90). In fact, it’s directly underneath it. Gregorio’s home is a tent and small al fresco dining table, part of a homeless encampment of 12 people under a busy highway.

“Before this, I stayed on the sidewalk over there,” he said, pointing to an area just outside the encampment. “But I guess people were scared to walk around me. An alderman said we could live here.” “Here” is a triangular patch of ground surrounded by a metal fence, bordered by three busy streets.

Gregorio is 61. Behind smudged glasses he looks out at his concrete neighborhood with sad eyes. He’s wearing multiple layers – a shirt, hoodie, and coat – to try to stay warm on this windy, 27-degree day. His bare hands clutch the Styrofoam containers of soup and juice he’s just received from The Salvation Army Mobile Outreach feeding truck (canteen), assistance he says is “important.”

The Army canteen makes eight stops around the city near encampments like this one Monday through Friday. From the canteen, two Army staff members serve soup made fresh each day at the Army’s Harbor Light Center, as well as juice, water, and bread, while other staff members, outreach caseworkers, talk with the people who approach the window for food, asking how they’re doing and if the Army can help them in any other way. Gregorio is one of their regulars.

Born in Puerto Rico, Gregorio moved to Chicago with his family when he was younger. While they all moved back, he couldn’t handle the hot climate there. He worked as a cook in Chicago for 15 years, and for another company for 20. Then two and a half years ago he threw out his back. A lifetime of demanding physical labor had finally caught up with him. As he tried to recover, he lost his job – and then couldn’t find another one. By then he was in his late 50s and couldn’t stand or sit for long periods of time. 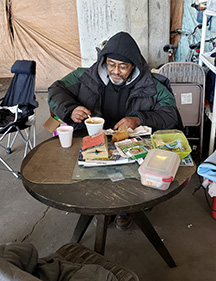 “With the little money I had saved, I got a small rental studio until all the money was gone,” he said. That’s when he wound up on the sidewalk, then the encampment.

In addition to food from the Army, Gregorio gets meals from churches and soup kitchens in the area. “Sometimes people from the community bring us prepared food or blankets,” he said. A local school lets them wash up occasionally. “Without all this help, I don’t know what we’d do,” he said.

That “we” is intentional. “They’re like my family,” he said, motioning at the other tents in his community. There’s a porta potty within their fence, donated by a local in construction. A colorfully painted picture of the Virgin Mary hangs near the gate into their neighborhood. At the holidays, there’s a Christmas tree.

“The hardest thing about living on the street is the cold, the weather,” Gregorio said. He has a lot of blankets. And there’s a warming shelter nearby. But he doesn’t like shelters, mentioning the “different attitudes” and stuff getting stolen. So this encampment is home.

But thanks to case workers from the Army and other ministries, he’s been entered into a system in which the city will try to match him with housing. There’s a woeful lack of affordable and subsidized housing in Chicago, but this list is a bit of hope for Gregorio.

In the meantime, he’s homeless. When asked about misconceptions of homeless individuals, he said, “That we’re all criminals.” He sips his juice and looks at his neighborhood. “There are good people here.”