When the members of the American Legion Post 335 in River Grove walked through their doors last Friday morning, they likely felt like they were walking back in time. These veterans, members of the VFW and American Legion, were greeted with a Salvation Army brass band playing patriotic songs, three Donut Lassies in costume, a WWI replica tent (similar to the one the lassies worked out of while feeding troops overseas), and the sweet smell of donuts.

The event was a celebration of National Donut Day, which was started decades ago by The Salvation Army, but the real stars of the day were the veterans, including one who was also celebrating his 90th birthday on Friday and another vet who turned 100 a couple months ago. 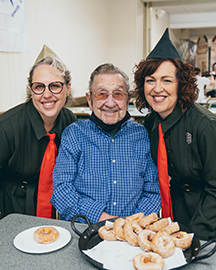 While they munched on donuts provided by Clyde’s Donuts and read historic displays from The Salvation Army Central Territory Museum, the veterans chatted with the Donut Lassies, a throw-back to the Salvation Army women who traveled overseas to provide emotional and spiritual support, supplies, and other services to our troops on the front lines in France. Recognizing a need to bring more of the comfort from home, these women also made fresh donuts and hot coffee, which they served to soldiers fighting in the trenches – thus the nickname Donut Lassies.

In 1938, The Salvation Army in Chicago celebrated the very first National Donut Day to honor these women and to raise funds for The Salvation Army’s War Service work. The Salvation Army Metropolitan Division now spends this day thanking our local veterans as well as other frontline workers, including police, firefighters, and medical care workers.

John, the vet celebrating his 90th birthday this Donut Day, served in the Air Force in Korea and North Africa. In attendance with his two sons, they were thrilled at this pre-party for the further festivities to honor John’s milestone birthday. While recalling his work fixing airplanes during and after the war, he also recalled the time The Salvation Army gave him and a buddy some money and a place to sleep for a night when they ran out of money on the way home from a road trip shortly after the war. Summing up what he’s learned in his 90 years, John said, “Tomorrow is a better day.”

Another veteran named John remembered The Salvation Army providing him and his fellow soldiers practical things such as toothbrushes, toothpaste, and deodorant during the war, supplies he said meant a lot to him as he didn’t have much to live on after sending most of his wages home to support his parents.

“In today’s day and time, when people are forgetting what is important and not taking care of our vets, to have an organization understand the importance of that is entirely humbling,” said Lorenzo Fiorentino, commander of the American Legion Post 335, of the Donut Day event at his post. “The guys had a blast. They sometimes sit around and wonder, Does anybody care? This gives them a measure of hope that someone does.”

Major Enrique Azuaje, General Secretary for the Army’s Metropolitan Division, said a few words of thanks to the veterans in attendance and said a prayer of blessing over them all.

Elsewhere in the Metropolitan Division, Salvation Army officers, staff, and volunteers delivered donuts to frontline workers and valued partners in our work to Do the Most Good in each of our neighborhoods throughout greater Chicagoland, northern Illinois, and northwestern Indiana. 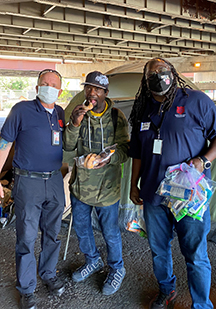 Our divisional social services team passed out donuts, hygiene kits, and lunch to residents living in three homeless encampments on Canal Street, Chicago Avenue, and Roosevelt, bringing a rare treat to these communities in need. We also delivered donuts to staff at the City of Chicago who have been valued partners over the past year as we served as the lead agency for the City’s Feeding Task Force during the height of the COVID-19 pandemic.

Our Elgin corps community center delivered 48 dozen donuts to 19 locations throughout their service area, including several area fire stations. In Rockford, Army staff and volunteers gave donuts out at the front gate of the popular City Market in their role as the Charity of Choice this Donut Day. Army volunteers in Aurora passed out donuts to area fire stations and police departments. “We want them to know they are valued and prayed for,” said Captain Gabriela Rangel of the Aurora corps.

See the photo album of all our Donut Day fun!