We Do Make a Difference

We recently received this moving story from Lt. Karen Felton, corps officer at the Midwest Corps Community Center, highlighting what a lasting difference The Salvation Army can have on a life and a community.

I was recently contacted by a gentleman named Keith who was wondering if the Midwest corps was still located on 20 S. Campbell. When I confirmed for him that it was, he told me his story.

Keith grew up in the high-rise building across the street from the Midwest corps. When he was a young boy, his family would come to Midwest for a Turkey dinner at Thanksgiving and a Christmas party complete with toys, Santa Claus, and ice cream. He said the Midwest Salvation Army was a very active part of his family’s life and the life of his schoolmates and their families from 1962-1968. 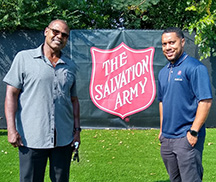 In 1968, Keith’s family was moved from “the projects” and his life began to unravel. He got involved in gangs and became one of the leaders of the Vice Lords. He said often when he was out running the streets, he would pass a Salvation Army shield and it would remind him of his humanity. He would be about to deliver a “beat down” or even pull the trigger, and he would get a flash of that red shield and just that flash meant less suffering for someone that night.

During his time with the Vice Lords, Keith said he became “a walking nightmare.” But he was unable to disconnect himself from his Christian experience, and a major part of that was through The Salvation Army and our presence in the neighborhood.

He eventually came back to the Lord, and he believes God has forgiven him. Keith said the hardest part for him is to be able to forgive himself for all the things he did out on the street. One of the ways he is now “atoning” for the sins of his past is to give back through The Salvation Army.

Keith now lives in northern Georgia and does a lot of work with the Army there. He also does anti-gang work and is a counselor for people who have been involved in gangs. He said he contacted us because he needed us to know that “your organization was and is a true gift from God that keeps on giving and giving and giving.”

Some days it’s easy to think we aren’t making an impact. But Keith’s story serves as a testimony that the seeds planted so long ago in this young child’s heart, by the simple things we do in most corps, has had a lifetime impact on his life. God is so good.