Praying for Justice in All Our Neighborhoods

About 40 people stood under the towering maple tree in front of the divisional headquarters of The Salvation Army Metropolitan Division in Chicago’s Albany Park neighborhood yesterday singing an acapella version of “Amazing Grace.” The people in the crowd, a diverse group all in face masks, stood at least six feet from each other – but were united in purpose: praying for peace and justice for all God’s children.

This gathering was one of eight that took place around the Metropolitan Division yesterday – from Rockford to Joliet – in response to the killing of George Floyd, the subsequent demonstrations for justice, and looting that has seized many cities around the nation.

“We feel deeply for our world, our country, our brothers and sisters, our city, God's Kingdom,” said Commissioner Sue Swanson, who initiated the prayer gatherings. “We all wanted to express care, felt that one means of mobilizing was to join with others in grieving, repenting, listening, and praying. We have not yet ‘overcome.’ But we pray and work for the day when we shall overcome by faith.” 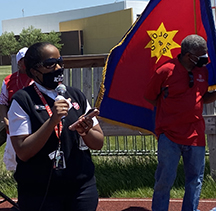 With the background noise of traffic, birdsong, and a lone helicopter overhead, those gathered at the divisional headquarters prayed for local businesses, for the Floyd family, for forgiveness, for wisdom, and for those still affected by COVID-19. One of the attendees prayed in Spanish. Across the street, grocery shoppers looked on from the line in front of the Aldi, where the windows were covered by plywood.

A Covering of Prayer

Evidence of looting was also not far from the prayer gathering at the Midwest Corps Community Center not too far from the United Center. Cadet Karen Felton, one of the corps leaders, said it was sobering to drive past small businesses in varying stages of clean up on her way to the gathering. “Many had boarded up and spray painted, ‘nothing here, looted already.’ My heart broke at the thought of an already impoverished neighborhood now having to figure out how to rebuild,” she said.

Those gathered stood in a circle outside their building, where they prayed the Peace Prayer of St. Francis, which begins, “Lord, make me an instrument of your peace: where there is hatred, let me sow love.” Cadet Karen said after that, “We prayed for healing, for reconciliation, for peace, for ears to listen and hearts to receive, we prayed for forgiveness, and we prayed protection over the neighborhood.”

Just a few hours after the prayer meeting finished, gun shots rang out in the neighborhood. Army staff in the building rushed home to safety. “As evening approached, I knew in my heart it would be another long night for our people,” Cadet Karen said. “But I also knew that we left a covering, brought on by our prayers.” 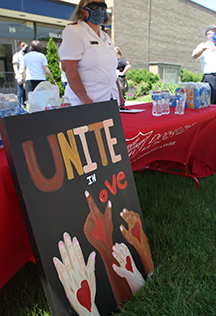 In Joliet, seven people – members of the Army staff, advisory board, and a local church – gathered on the front lawn of the corps community center to pray, sing, kneel, and communicate care to their hurting city. Captain Wendy Faundez, one of Joliet officers, said their city has seen a lot of protests in recent days. She has even heard gunshots and firecrackers from her bedroom window.

As she and the others gathered prayed for more peaceful days in their city and for the black men in their community, Joe Williams, a black man from their neighborhood, came down the street on his bike. Feeling the need to stop and join the prayers, he shared that his mother had been shot the night before. As the group prayed for her and for Joe, he said he felt God calling him to turn his life around. Captain Wendy prayed with him, and he became a Christian. “He said he doesn’t usually ride his bike down our street,” Captain Wendy said. “This was no accident. It was very moving.”

Others stopped and joined the gathering as well, sharing their needs and prayers. “We feel a stirring for continued prayer walks in our community,” Captain Wendy said. “This is just the beginning.”

Check out more photos from our prayer gatherings