The Transforming Power of an Honest Day’s Work

Renee Williams still remembers her first meeting with Kelly, a brand-new client in her employment services program at The Salvation Army Harbor Light Corps Community Center. “He mumbled his answers and didn’t look me in the eye,” Renee said.

She soon learned why: Kelly had been released from prison just months before, after serving 20 years for first-degree murder, and was having trouble finding someone who would hire him. “I see some of the most down-spirited people,” she said. But Renee also sees their potential. 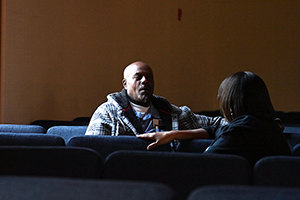 Kelly signed up for Harbor Light’s job-readiness program, where Renee taught him interview skills and phone etiquette, and helped him create a resume. “She gave me a chance when everyone else said ‘no,’” Kelly said, adding that he makes no excuses for his past and simply wanted to move forward. Renee put Kelly in contact with an employer who was also willing to give him a chance, and soon Kelly was driving a truck, earning a meager salary, and starting the process of rebuilding his life.

Most of Renee’s clients have things in their background that make landing a job difficult – a prison record, a past addiction. But if they can’t find a successful path forward, including a means of supporting themselves, many see no other option but to go back to their old ways. The employment services program works with companies, like the Chicago Transit Authority (CTA), that will hire those who wouldn’t pass a traditional background check, often working them incrementally into a fulltime, permanent position.

Other clients have trouble getting the kind of job that can support a family. “In our community, you work at the Dollar Store, grocery, or convenience store,” Renee said. But even with the minimum wage now at $15 an hour, Renee said, “That isn’t enough to go out and get an apartment.”

While Renee places some clients in “right now” jobs, she also asks them what they want to do. “You have to work eight hours every day, so you have to work somewhere you enjoy,” she tells them. It was this encouragement that helped lead Beatrice, another employment services client, to become an assistant chef.

The food Beatrice cooks in the Harbor Light kitchen feeds homeless individuals on the street and men in Harbor Light’s inpatient substance use disorder treatment center. Beatrice had wanted to work for the CTA, a fact she made abundantly clear to Renee on their first meeting.

“I was bull-headed,” Beatrice said. “I didn’t have any patience at all.” Renee helped Beatrice calm down and talked with her about how to deal with things we have no control over, just one of the life lessons clients often must learn before they can successfully hold a job.

Like many of the employment services clients, Beatrice went to work for Harbor Light, gaining valuable work experience to put on her resume. Working in the kitchen, she was reminded that of all her past jobs, working with food was always her favorite. Four years later, she still finds her job meaningful. Her favorite part? “Putting a smile on everyone’s face,” she said. “I love being there, interacting with the others. I think I make a big difference to them too.”

She also appreciates the stability. “Keeping a roof over my 13-year-old daughter’s head. That’s the most important thing.” 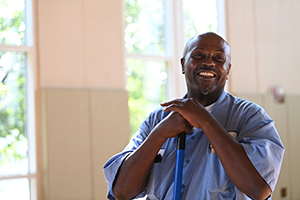 “I don’t know if I could describe what it meant to me,” Kelly said of the help he received from Renee and the employment services program. “I didn’t know the first thing about resumes and interviews.” But thanks to the help he received, he did so well on his interview for the trucking company that they hired him before even interviewing the two other men waiting their turn in the hall.

Kelly now works for a janitorial company and has taken it upon himself to provide extra care for the seniors who live in the building he cleans. This better-paying job allowed him to purchase a three-flat building. He lives in one space and rents out the other two. “I haven’t missed a mortgage payment and I have money in the bank,” he said. He also proudly admits he hasn’t had a drink, done drugs, or had any appetite for violence since his release from prison, calling The Salvation Army “ground zero” for turning his life around.

Today whenever Kelly and Renee see each other, they hug and laugh like old friends. He calls her his personal angel on earth and says he thanks God every day for the employment services program. “If the water in Lake Michigan were ink,” he said, “it wouldn’t be enough to write all that I love about The Salvation Army.” 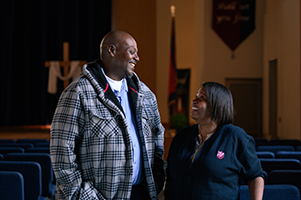