Rest For the Weary: A Bed & Bread Story 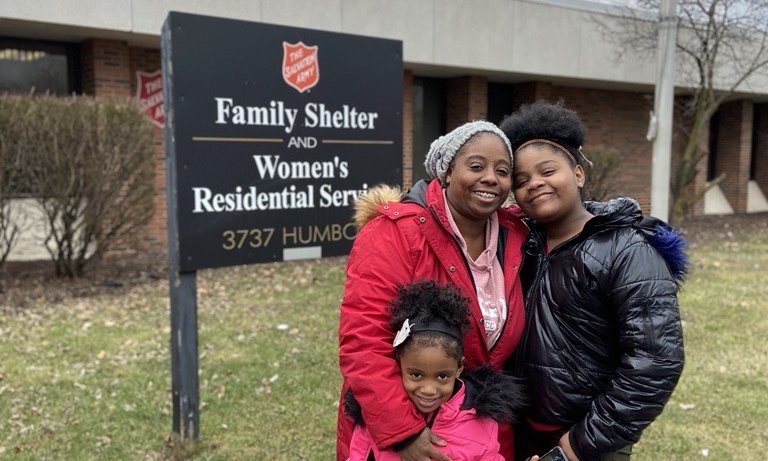 Letitia was exhausted. The single mother of two girls was working innumerable hours at 2 jobs as a nursing assistant just to scrape by. One day, after working 12-hour night shifts for 10 days straight, she started making dinner but found herself so sleep-deprived that she had to lie down. She woke up to her daughter crying, and her apartment was on fire. Everyone in the apartment was okay, but Letitia lost her apartment and most of her possessions.

“That was my rock bottom. I realized I could not keep on going the way I had. Up until that point, I was too proud to ask for help. After the fire, I started making some phone calls. I called 211 and got put on a list to be interviewed to go into a shelter.”

Letitia had no support system, and her family was facing homelessness. That changed after her shelter interview at The Salvation Army's Women’s Shelter on 3737 Humboldt. She and her daughters got a clean, safe place to stay. While Letitia stabilized and started to put her life back together, she built relationships with other women and families in the shelter and got to hear their stories. Though she knew her stay would be temporary, the shelter became home.

“I would come home from work, and I would just be able to relax. I would get to know the other women over dinner, and our kids would play together. We were all just everyday women who were trying to get through bad situations.”

Letitia had a set of goals she worked on while she received support from The Salvation Army: find permanent housing, get a better handle on her finances, and spend more time with her daughters.

“I remember that I was working so much that I was never able to really see my girls or spend time with them. In the summer, they would want to go swimming at the apartment pool, but I would tell them, ‘Mommy has to go to work.’”

After about five months in the shelter, Letitia was able to move into an apartment. The Salvation Army also provided vouchers that allowed her to completely furnish and decorate her new place. Letitia successfully balanced her work and life, and she eventually moved into her own house.

“I provide for my girls, and now I get to spend time with them, too. I better situated my finances, I see my girls after school, volunteer at their school, and I’m able to be more present with them. That means everything to me.”

Recently, Letitia started pursuing a full nursing degree. Her daughters are thriving. Thanks to The Salvation Army, Letitia got the fresh start that she needed.

“After the fire, I didn’t have anybody. The Salvation Army was a lifesaver for us.”

If you are inspired by stories like Letitia's, make a donation to support our Bed & Bread program that houses and feeds Detroiters in need.