Since 1890, the Salvation Army of Kenosha County provides food, resources, and help to those in need. 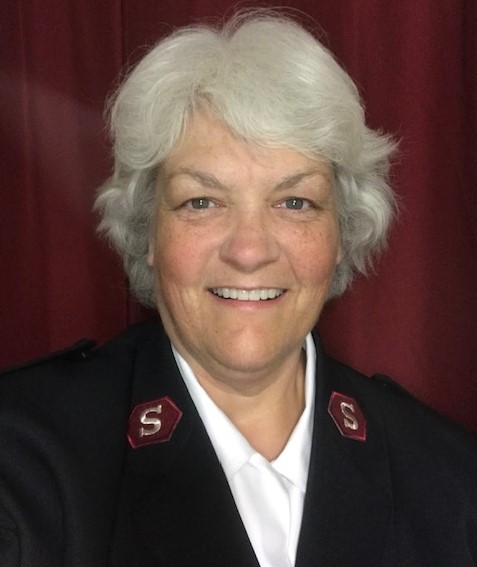 Auxiliary Captain Marie Lewis, Corps Officer
Marie Lewis had felt God calling to her since she first accepted Him as a young child. The immediacy of living makes it hard to answer that call sometimes, especially with a family. Marie was immersed in raising her two daughters and providing for their needs. That call was still there, pulling at her heartstrings, and at a suggestion from her brother, Marie stepped up to volunteer at The Salvation Army in Waukesha. She immediately felt at home and started attending church service. Marie started planning to leave her job and take a full time opportunity with The Salvation Army in a few years but God has his own timeline. The Kenosha Corps needed a Corps Administrator and Marie was asked if she would be interested in the position. This would mean uprooting her life and starting all over and she had been planning this for a future point, but as the Bible says “There is a time for everything, and a season for every activity under the heavens: a time to be born and a time to die, a time to plant and a time to uproot, a time to kill and a time to heal, a time to tear down and a time to build, ...” so this was her time to uproot her life and build with the Kenosha Corps. So in July of 2016 she came to Kenosha to answer God’s call and to follow Our Lord Savior’s example on living a life of serving others. Aux. Captain Lewis was installed as an Auxiliary Captain in December of 2018.

Daniel Parrish, Case Manager
Dan Parrish serves as our Case Manager, providing guidance, care, and support to individuals who come to the Salvation Army for assistance. A native of Elgin, Illinois, Dan holds a Bachelor's of Science in Business Management from NIU and a Master's of Divinity from Trinity Evangelical Divinity School. Dan spent over 17 years in full time pastoral ministry and three years leading a homeless shelter before coming to the Salvation Army. In 1985, Dan married Jeanne and together they have two boys: Jonathan and Michael. In his free time, Dan enjoys spending time with his family and hitting up thrift shops for good books.

Patricia York, Office Manager & Volunteer Coordinator
Patricia York is our Office Manager & Volunteer Coordinator taking care of bookkeeping and all volunteer activities for the Kenosha Salvation Army. A lifelong resident of Kenosha, Patricia graduated from Gateway Technical College. She and her husband Dave enjoy spending time with their family, catching up with the grandchildren and following the Green Bay Packers.