JERI KINCADE: A U.S. NAVY COMMANDER AND SALVATION ARMY JEWEL, IN THE SPIRIT OF JUNETEENTH 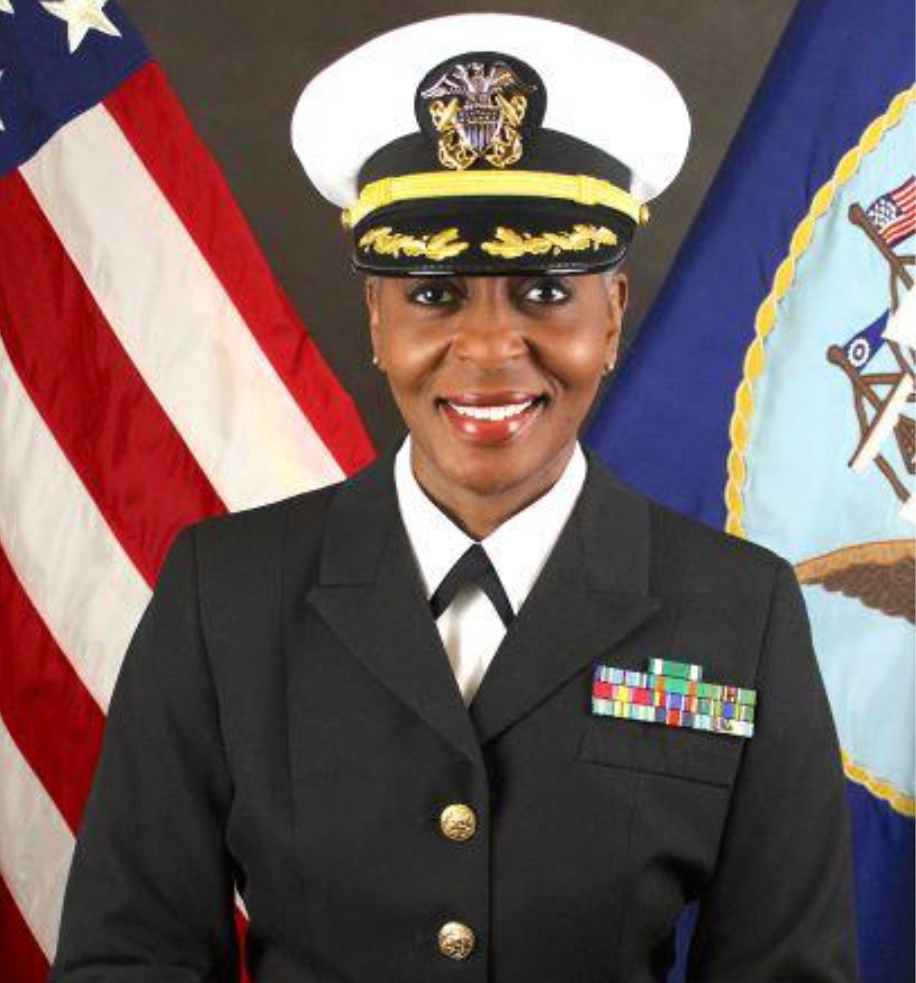 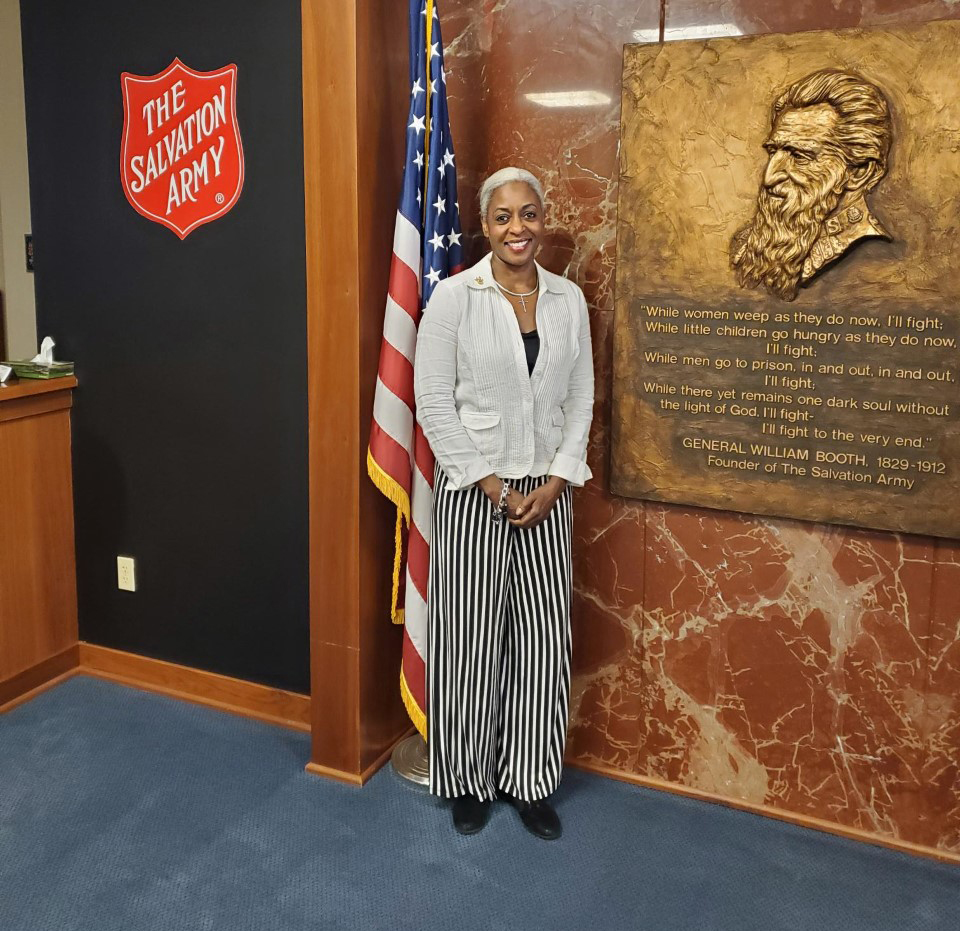 Jeri Kincade, a decorated U.S. Navy Commander and Supply Corps officer, has lived an exciting life that most people wish they could. Kincade has accumulated a globetrotting wealth of logistical know-how, honed from years of military structure and execution, transcending language barriers and cultural differences to ensure military operations continue uninterrupted.

When she’s off the Navy clock, she’s crunching numbers as the Director of Accounting for Salvation Army’s Divisional Headquarters in St. Louis, moving the gears that keeps TSA operational. Operating in a constant sweep of motion unassumingly from a cubicle, Kincade presents a monthly budget to her finance board.

Initially looking for long-term good healthcare, Kincade sought the military as an employer, before entering the Navy in 2001. Kincade became a specialist in what is the crucial catch-all category of military needs, supply officer, which handles responsibilities from payroll to ordering food. It is the heart of the operation, keeping things alive, with the system largely in paralysis without it.

Beyond that, Kincade has something of a rare accomplishment for a U.S. Navy Commander. She made her way through the ranks in a military world populated largely by men in positions of leadership. To boot, she succeeded as a woman of color, in a community that lags in its representations of women of color. Kincade sees this dynamic as a challenge and way to get stronger, even though she would prefer not having to think about it, she said.

With Juneteenth coming June 19, The Salvation Army honors our own Jeri Kincade for her accomplishments as a woman of color, representing her country patriotically in the Navy and excelling in a field when not many colleagues may look like her, with this Q&A conversation.

Q: When did you first consider joining the Navy?

I thought this would be a good way to get my college paid for. I waited until after I got my bachelor’s and master’s [degrees], and he [my son] was at an age that I could leave him alone. In college, the cost of prescriptive drugs was going up. I knew the military had a lot of good benefits, and one of them is healthcare. I said, ‘When I get to retirement age, I really don’t want to have to worry about that,’ and hopefully my good health care along the way.

Q: What do you do for The Salvation Army?

A lot of the regional social services and emergency social services program that actually affects that city area is pretty much what the city fund handles. The second week of the month, we’re closing the previous month. Into the third week, for me as the director, we usually have our finance board meeting. I’m presenting to them the financials for the previous month and let them know how things are going.

Q: What do you do in the Navy?

Being in the Navy, I went into the Supply Corps, which is the financial management unit of the Navy. We handle the money, the food, the logistics, supply and contracting, and some expeditionary things. On ship, we run the galley, which is all the foods. We run the pay system, so everybody has to get paid on there. We’re running the supplies, anything from a pencil to an engine to a captain’s chair. We handle if you have to purchase something, whether it’s a toiletry item, badge, uniform items, and all the washing, drying and grooming needs. What we always say is, we handle everything but steering the ship, which we do.

Q: You have numerous military decorations, including the Navy and Marine Corps Commendation Medal, Navy Meritorious Unit Commendation, Korean Defense Service and Overseas Medals, and Outstanding Volunteer Medal. Which of those decorations was hardest to get?

Probably the overseas ribbons. There are the Korean Defense medal and overseas medals. You do have to spend quite a bit of time overseas, which meant time away from family a little more, learning customs and cultures. Most of the times, even in NATO countries, there are still going to be language barriers you come across. After that, we’re still in for the mission – still being diplomatic but knowing we have a hard line of we’re here to get something done. Those two ribbons give you a good feeling that in partnership around the world, NATO and non-NATO, we’re keeping our democracy, basically.

Q: What was it like finding diplomacy in Korea?

Two years ago, we were in the middle of exercise. That was when the North Koreans were at the wall. We were all there too. It was a little uncomfortable, but we had to pause everything. As we say, you can’t practice war when they want to have a little bit of peace. It was really interesting to watch the North Koreans and South Koreans, as they were very interested in the peace accord, which we were too. It was good to witness.

Q: What was your most recent assignment?

We did missions with Central and South America. During this time last year, at the height of COVID, one of the ships that the U.S. partners with is the U.S.S. Comfort. Logistically, what I would be doing was knowing where they need to go, the whole border of Central and South America. Being out there in the wild, you’ll need tents, water, lights, cars, cell phones, MREs maybe for some folks, a lot of ice, coolers, fans, tents, tables and chairs. They won’t have a separate RV for medical, but the Comfort is bringing medical attention to anyone in that area. As we make stops [through] the region, we make sure that once we get to that port, they have everything set up.

Direct. In the military, you can’t be but direct at the highest level. It depends on what level you are on. The lower you go on the totem pole, you’re more indirect with the forces. It’s more direct where I am because time is of the essence. When you deal with contracts in different countries, not all of them have fiduciary or ethical feelings, so we may have to make sure our contract goes accordingly. So, you have to be real direct, straight to the point.

Q: When did you reach that leadership style?

It was always there – the military just refines it. Here at work, you may have a lot of what we call fluff. You talk with people back and forth. ‘Hey, let’s get this, sit down and discuss that.’ It’s the same over [there], except we’ve got to cut away a lot of fat. You may have over here, and I can say this because I experienced it, a meeting that may go 30 or 45 minutes, discussing this and that. In the military side, you may have that same meeting, but it’s probably going to be about 15 minutes because you’re going to cut to whatever is pertinent. Any outside discussions, if they go longer, are offline. You cut away a lot of fat. A lot. When we say, ‘on time,’ is late. Five minutes [early], you’re almost late. Being that it’s the Navy, everything is in accordance to ship life because that’s what we do.

Q: As with many areas in American life, women have encountered in the U.S. military glass ceilings in advancement to the top leadership positions. What’s it like breaking through the glass ceiling?

It’s an awesome opportunity. I thought about that when I first came in. But I knew women had been in there. It is something that you have to always think about. You shouldn’t have to always think about it. I think the barriers have gotten better throughout the years and decades. On the whole, you do look at the military and see there are not a lot of women in leadership positions, though it is getting better. You just take it head on. I remember when I was going through a lot of my mentoring early on, I would actually ask senior officers, ‘What can you tell me, not only about a female, but a minority female, and how it’s best for me to go forward?’ Some of them looked glass-eyed, and some said, ‘This is what I’m working on.’ In a lot of ways, the Navy has done great to handle diversity, either with women or women of color, from what I see. They have said quite a few times, even at some of our conferences, they will use the verbiage, ‘We’re tired of seeing all white males.’ It’s awesome to know that they are actually thinking about that. Not only the male perspective – we want to see more females. It’s getting there. It’s actually getting there.

Q: As a woman of color, what are the unique challenges and responsibilities in excelling in the Navy?

A lot of times, you don’t really have to think about it until you’re confronted with it. I’ve had some C.O.s (commanding officers) that were not diplomatic, if you will. But you just have to say ok and make a note of it. I’ve had some say, ‘I just want a person in a chair. I don’t care what they look like, male or female.’ Then they support you all the way. Challenge, you just go with it if necessary. It can also be something to make you stronger to say, ‘Ok, that’s ok. My next unit, I’m going to still shine and do everything I’m supposed to.’ One of those conferences, somebody is going to say, ‘Hey, I noticed what you do with this or that exercise. Let’s try and get you on board. I think you would do great things for my unit.’

Q: How does The Salvation Army fit into your life and career?

One of the things we definitely say on our side, the active reserve, we always tell people you have to have balance. If you don’t have the balance and support of your family, the military life is going to be detrimental to your career and families. They have to support what you’re doing because we do a lot. We [are] going to take away from some family vacations, holidays, evenings. I had already mobilized a couple of years ago, and it was very helpful to know The Salvation Army supported, as I was told by the HR, military and goals or initiatives that we have if we do have to mobilize. That’s awesome. It’s helpful when you have an employer that says, ‘We support that you’re going.’ Not, ‘If you go away, we’re going to fire you.’ We, as reservists, have to move around. I tell you, when I was gone, there were a lot of people who did not have a job to go back to. I would say The Salvation Army did support me the time I was gone. I got emails saying, ‘Hope everything is going well. We’re here if you need anything.’