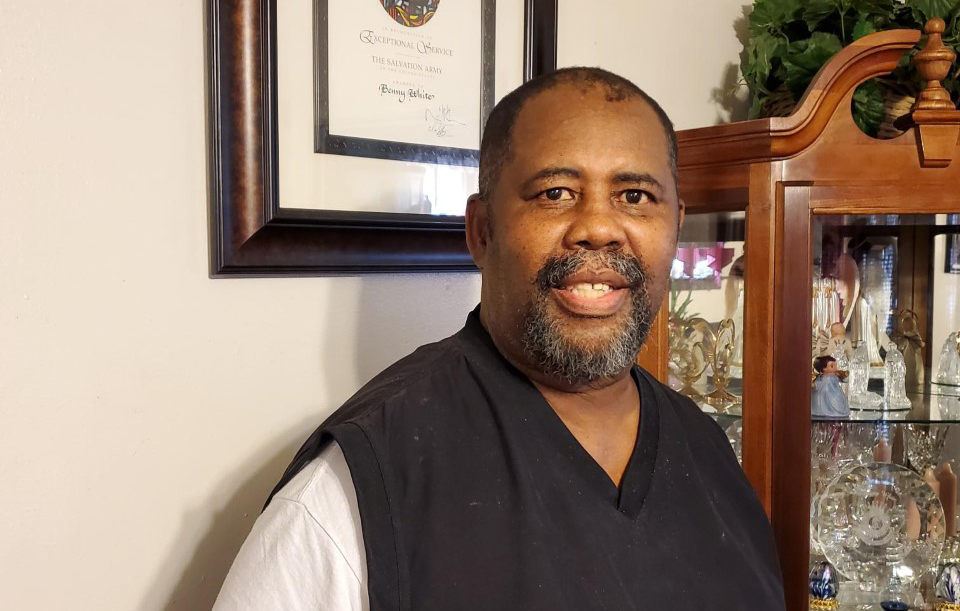 For Benny White, a retired Sunday school teacher and custodian for The Salvation Army’s St. Louis Division Headquarters, this will be his 46th Father’s Day with four children. During his decades of service in the TSA, White was an active member in the ministry, devoting many hours to teaching kids the virtues of hard work and staying out of trouble.

White is a favorite among staff at the St. Louis’ office, as mentions of his first name “Benny” perk up employees’ ears of fond memories with the 41-year employee of The Salvation Army, years after he stopped working there. His harmonica skills, sharpened from years of playing for small audiences on the streets of St. Louis, are a rare and joyous added perk of his presence. (See Benny’s harmonica skills in the video on this page.)

Deeply versed in Biblical scripture, White intersperses his conversation with relevant verses, often in the context of teaching how to channel the word of God into someone’s life. He has studied numerous versions of the Bible and even created a Bible “Jeopardy!” game board for his students.

White has three sons, Benny, Terry Ismael, and Lamont, one daughter, Angela, and a deceased son, Rataka. Benny said he potentially could have followed his father’s footsteps, a strained relationship in which Benny met his absentee father for the first time when he was 28. Reading the Bible helped him be a better father, Benny said.

“I didn’t learn from parenthood until I read the Bible,” White said. “I learned all my ways onto the Bible, asking questions to the way of being a parent. To me, there wasn’t a whole lot of role models.”

A treat for someone who has never met Benny is hearing him play harmonica. He has a collection of harmonicas, which he uses to bring the room alive with an entertaining old blues style.

“We used to sing songs, like ‘Hambone, hambone, have you heard?’” White said. “People down there playing spoons. It’s the stuff like that, that’s old fashioned to a lot of people, but that’s how we were making it as a kid.”

In honor of Father’s Day, The Salvation Army Midland Division pays tribute to one of its favorites, Benny White, with a discussion about fatherhood and his decades-long advocacy for at-risk youths.

Q: What unique thrill is it being a dad?

I’m teaching the kids because a lot of times you fall into your father’s footsteps. You don’t realize you fell into the same footstep to the point of you had that kid you ain’t paying for. You’re out there messing around. I used to carry my daughter everywhere I went. Working in The Salvation Army, I try to keep her and my son in the program. What I learned with the kids that you do things with them. You’ve got to go to the baseball game, football and volleyball game. You’ve got to participate with them. Don’t be a stranger. Sit down with them and talk, have a personal relationship with them. I had to learn that, too. Being a father, you have to understand how to have a personal relationship with your son and daughter. There are so many things when I’ve been a father teaching the children to understand how life really is. You can’t judge everybody you run into, because we’re all going to be judged. You have to be self-controlled. You’ve got to be able to understand your situation and what you’re getting involved with.

Q: What drew you to working with kids?

When I first started, I worked as a custodian, and I saw kids like me. I didn’t have a father at home. I didn’t know my father until I was 28 years old. I come to be a man to forgive and allow the word of God, train me as his child. [Kids are] in a household with a mother and no father. You’re trying to teach them how to live and be focused. You’ve got to want good things in life to get good things. You can’t go out there and say I want to steal, rob and do these old foolish things, instead of trying to do something positive with your life, other than going and being in a gang. I had a lot of problems when they were called the Crips and Bloods, the Black Disciples, and all the others. I was saying, ‘What is the purpose of your game? Why do you want to follow someone who do wrong anyway?’ You can do wrong by yourself. You can go out there and get in trouble by yourself. You don’t have to be in anybody else’s game. You can make your own game. Ask yourself, ‘Would I want to be the head or the tail?’

Q: What was it like teaching your kids discipline?

You’ve got to understand that when kids leave, you can teach them, but some of the other kids are going to train them. They’re trying to be followers. You’ve got to realize those kids ain’t never taught their selves and overwhelm them to a point of, ‘You’re going to do what I want you to do or you ain’t going to be with me.’ I was trying to teach mine how not to be a follower. You be a leader. That’s not the way it works. You cannot follow somebody if you don’t know what they’re doing. I never want to be anyone’s follower, and that’s the way I was brought up. If I’m going to get in trouble, it’s going to be by myself. Ain’t nothing wrong working with folks as long as they’re doing the right thing and trying to help them out. But you also understand that what they’re doing is right. I had to teach my kids, if you don’t know, you have to be able to ask questions. I don’t know how you’re going to be able to get ahead in the game if you don’t ask questions.

Q: You were a sparring boxing partner with Leon Spinks earlier in your life, and your oldest son, Benny, was a boxer. What was it like seeing him follow in your footsteps?

It was inspiring that they were doing something positive and wasn’t going out there to get in trouble. He loved boxing. He didn’t start boxing like I did, like we used to street-fight. He started boxing in the Marine Corps, and he chose to do that. I know he did Desert Storm, Baghdad – I knew he went to a lot of the wars from his time on. Everything was good for him to see a different way in life, how different things change. He might not have understood a lot of things while you’re fighting for it, but he understood he was doing it for the United States. He used to tell me in the Marine Corps, it’s a mind game. When he left the Marine Corps, he did four years of it, and then he got into the Army. He wanted to go to school, but in the Marine Corps first you have to go through this mind thing, or you’re going to have problems.

Q: What do you think of your time and memories when looking at stories about your life?

You’re helping a lot of people, you’re doing good things, you’re reaching out to people. You’re reaching to a point where you’re helping them change their lives and be productive in their lives. You’re showing people different ways of living. You’re showing people you care for everybody. You don’t have the mentality of different races and different things. You’re taking people as they are and accept them for the way they are. Understand there are prejudices in the world, but you don’t have to be a part of that. Everybody’s got their own agenda, but they also know right from wrong. You don’t have to be ignorant to do the right thing. You’ve got to be able to go out there and be yourself and let people be their selves. You don’t hold a grudge to everybody. Understand some things are going to be ignorant. You have to get past that.

Q: What did The Salvation Army teach you about parenthood?

I don’t think I learned from parenthood until I got into the Bible. I learned all my ways into the Bible, I thought about asking questions to the way of being a parent. To me, there wasn’t a whole lot of role models. Stay outside late, when the streetlights come on, you better be hauling home. Some parents let their kids stay outside and do what they want to do, and that wasn’t a good physical model.