Dynna, a 37-year-old single mom in Englewood, has a love-hate relationship with Doritos. So when she learned that her church, The Salvation Army Red Shield Center, was starting the Fresh Desert Healthy Urban Diet Initiative, she decided to give it a try. She got her 16-year-old son, Prince, to join her as well.

Truth be told, access to a personal trainer was the biggest draw to the program for Dynna. She has limited mobility due to the leg swelling caused by her diabetes. Mobility isn’t the only thing diabetes has taken from Dynna; she’s lost an aunt, uncle, and grandmother to the disease – most of them before they turned 50. “I’m seeking to be as active as I can be,” she said. “I want to live.” 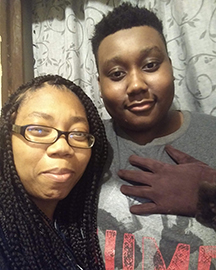 Dynna was delighted to learn that the program offers much more than a personal trainer and weekly group exercise classes. Participants also travel to the grocery store together every other week, where they spend a stipend on groceries with guidance from a nutritionist. The program also includes classes with a personal chef, an app to track food and exercise, weekly weigh-ins and blood pressure checks, and access to the Red Shield Center’s fitness center.

They look at you as a whole person and consider your environment,” Dynna said. “And they don’t throw you under the bus for eating potato chips!”

Dynna, the oldest of 10 kids in her family, came by her love of Doritos and other processed foods at an early age. Growing up in Englewood, she said that $5 at Aldi’s would buy a bag of potatoes, hot dogs, rice, and beans. “Growing up, that’s what we ate,” she said. “Beans and rice, franks and beans, French fries.” The food was affordable, available, and didn’t take too long to cook. She’s now learning that those foods are high in salt and low in nutritional value.

Today, Dynna says the challenge is the gas station and corner store you can find on nearly every block in Englewood. She said if the kids get hungry before mom gets home late from work, they just go to one of those stores, which are stocked with cookies, chips, and soda. “By the time mom gets home, the kids are full of cookies and pop,” she said. “It’s tempting not to cook.”

These challenges are exactly what inspired the Fresh Desert Healthy Urban Diet Initiative. “Many of our Englewood Chicago neighbors lack access to fresh produce, healthy alternatives, and a safe space to exercise,” said Captain Corey Hughes, corps officer at The Salvation Army Red Shield Center. “The deadly COVID-19 virus left a stark and undeniable reality in its wake. Most COVID victims suffered from preexisting conditions like obesity, diabetes, and high blood pressure, all of which can be a result of a poor diet and lack of exercise.”

Dynna said the nutrition class has been a game changer. They’ve discussed the importance of looking at food labels and avoiding processed foods. On a recent grocery store trip, the group was encouraged to shop the perimeter of the store, where the fruit, produce, fish, and poultry are located. The one aisle they were encouraged to shop is the seasonings, with the assignment of buying at least one no-salt seasoning they hadn’t tried before.

“I didn’t know basil was that good,” Dynna said. Thankfully, her son and mom, who also lives with her, like it too. Oregano and cilantro are her next seasoning experiments. The class has also helped Dynna realize she likes asparagus, cauliflower, and hummus. “I wouldn’t have tried those on my own.”

She said the stipend for groceries is especially helpful for discovering healthier foods she likes. “If you’re trying to feed a whole family and you try hummus and they don’t like it, it’s a waste of money,” she said. This program allows them to experiment and find healthier favorites for free. “It’s opened us up to new things.”

Halfway through Phase 1 of the program, Dynna is already thrilled with the results. She says she’s moving and sleeping better. Her son, Prince, is eating more fruit than chips now, is completely off sugary drinks, and is excited about working out. “Don’t get me wrong, we still have to run away from Doritos,” she said with a laugh. “But I have more flexibility, I’m able to walk longer, and I’m looking forward to being on less medication.”

While she was excited about the personal trainer, Dynna said, “God is doing so much more with this program.” She’s not surprised that this life change is coming from The Salvation Army. She started attending and then volunteering at the Red Shield Center five years ago. Back then, she said she was in an emotional drought. “I felt like I was nobody and God didn’t care about me,” she said. Now an active member of the church, worship team, youth mentoring program, and diet initiative, she calls the Red Shield Center community family. “I now have a deep sense of purpose and direction.”

Dynna was reminiscing with her mom recently, and said, “Do you remember when we had nothing?” Her mom expressed gratitude that they are now in a place to make plans for a better future. “This program is giving me a chance to live longer,” Dynna said. “I’m so grateful.”