Thanks to your donations, The Salvation Army’s March Food Drive raised about 2.2 million pounds of food and cash equivalent, besting last year’s total by 200,000 pounds.

The food is already being used to replenish The Salvation Army’s 22 food pantries in Minnesota. Thousands of families are relying on these food pantries as they battle inflated food prices, supply shortages, and other financial challenges beyond their control. 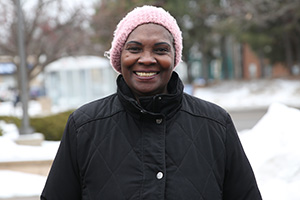 That includes people like Carolyn (pictured), a hard-working mother and grandmother from St. Paul. She provides daily care for three of her children and four of her grandchildren, all of whom live with autism.

“Whenever times are really desperate and I don’t have the (means) to make a full meal for my kids and grandkids, I can count on The Salvation Army for help,” Carolyn said. (Watch a video about Carolyn.)

The success of this year’s food drive is largely attributed to WCCO-TV, which promoted the drive extensively in its newscasts. 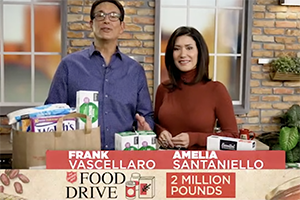 “A huge thank you to WCCO for helping us take our food drive to the next level,” said Lt. Col. Dan Jennings, leader of The Salvation Army Northern Division. “We could not have raised this much food without their help.”

The food drive culminated April 2 in a special weigh-in event at Salvation Army headquarters in Roseville (see photos). Gracious donors drove up in their cars to drop off food, while dozens of volunteers sorted thousands of pounds of donated nonperishables.

One of the drive-up donors was a man named Bob. He stopped by to donate high-demand foods such as peanut butter, rice, pasta, and canned fruits. 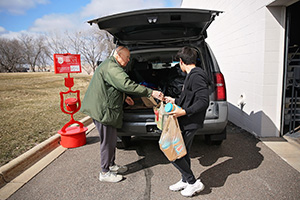 “I’ve been donating to The Salvation Army for as long as I can remember – and that’s a long time,” the 78-year-old said with a laugh. “It’s a wonderful organization that deserves my compliments.”

Many local businesses supported the drive, including SPIRE Credit Union, Schuler Shoes, Cub grocery stores, and Morrie’s Auto Group, all of which accepted donations at their Twin Cities locations throughout March. In addition, pop-up food drives were hosted by the Star Tribune and KS95, with large donations of canned goods given by Lakeside Foods (24,000 pounds) and Faribault Foods (43,000).

“Thank you to our donors, partners and volunteers for making this year’s food drive an incredible success,” Jennings said. “Your support has shown tens of thousands of Minnesota families in need that there is love beyond hunger.”