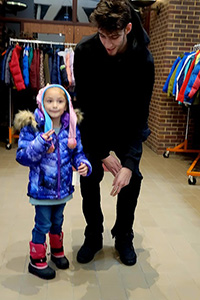 NBA first-round draft pick and hometown hero Chet Holmgren recently distributed winter coats to families in need at the Brooklyn Park Salvation Army after the facility was damaged by arson.

“I thought I’d step in and lend a helping hand to those who might need it,” said Holmgren, a Minneapolis native who was selected second overall in the 2022 draft by the Oklahoma City Thunder.

Holmgren had read news coverage of the vandalism and arson, which damaged all the coats that were being readied for distribution to families in need. He contacted the Twin Cities Salvation Army and asked if he could help replace 170 of the damaged coats through a partnership with Operation Warm. 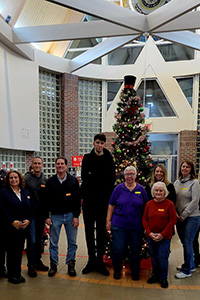 “Minnesota is not a place you want to go without a coat for the winter,” Chet said. “Being from here and growing up in the cold … this is great full-circle moment for sure.”

Holmgren played high school basketball for Minnehaha Academy and was a highly recruited college player. He spent one year at Gonzaga University before entering the NBA draft, but is sitting out his rookie year due to an ankle injury.

“Chet’s desire in wanting to help the people of his hometown is truly heartwarming, and we are extraordinarily grateful for his assistance in replacing these coats,” said Lt. Colonel Dan Jennings, Salvation Army Northern Division commander.