​​​​One year ago, communities across The Salvation Army Western Division -- which serves Nebraska, South Dakota and western Iowa -- began to feel the impact of the COVID-19 pandemic. Here at our Omaha headquarters, we immediately initiated a pandemic-relief response to help those communities fight back. Twelve months later, as we continue our COVID-relief efforts, we are looking back to salute The Salvation Army volunteers who so readily and generously answered the initial call to serve. Beginning today and continuing over the next three weeks, we’ll bring you an inspiring story of a metro-area individual, couple or family who made a big difference in this ongoing battle. We kick off this four-part series with Army veteran Scott Brown’s story. 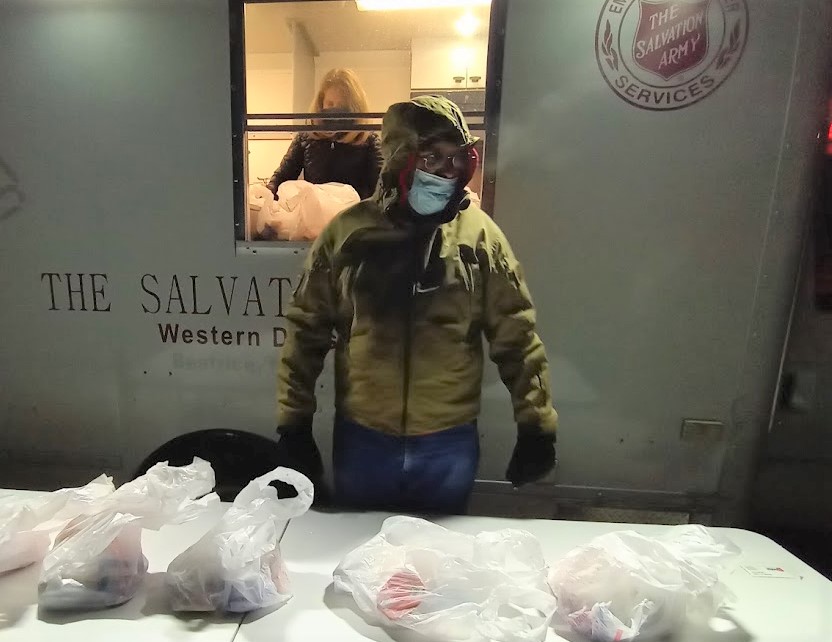 As a former staff officer deployed to numerous war zones and disaster areas during his 32 years in the U.S. Army, veteran Scott Brown knows how to lead a mission -- a skill that’s turned out to be well-suited for his volunteer work with The Salvation Army.

When the pandemic forced local schools to close last March, Brown stepped up to drive a food distribution truck for the Mobile BackPack Program -- a partnership between The Food Bank for the Heartland, The Salvation Army and several other area agencies that ultimately provided more than 421,000 meals to families in need during the pandemic.

Every week from March through June, Brown drove a truck from The Salvation Army Western Divisional Headquarters to the parking lot at Castelar Elementary School – one of 18 food distribution locations around the metro -- where he helped unload and distribute meals to food-insecure children and their families.

Brown is no stranger to The Salvation Army. He signed up to volunteer in 2015 after attending a disaster services training at a local church. “The Salvation Army showed up with one of their food trucks to talk about their Emergency Disaster Services program, and they said, ‘This is your invitation to get involved.’ So, I did,” Brown recalled.

Five years later, Brown still drives one of The Salvation Army’s mobile food trucks – called canteens -- nearly every Monday night between early December and late February for Winter Night Watch, a program that serves hot meals to homeless individuals on the streets of Omaha. And during the Flood of 2019, he regularly drove disaster-relief supplies to Sioux City, Hamburg, Council Bluffs, Columbus and other hard-hit towns.

“Scott is a huge asset to us,” said Peter Hoskin, Salvation Army Emergency Disaster Services and Service Extension Manager. “The canteen driver is the one the crew looks to when they go out, and Scott, with his experience and his military background, naturally fills that role. He has been one of our most loyal and reliable drivers, and we are grateful for his leadership.”

To learn more about volunteer opportunities with The Salvation Army, please visit our volunteer webpage or contact our volunteer coordinator at 402-898-6000 or WSTvolunteers@usc.salvationarmy.org.