Giving Shanticia and Her Three Kids a Second Chance at Life

Earlier this year, Shanticia Ferguson, a single mom of three in Rockford, reached a breaking point. “I got to a point where it was them or my pride,” she said. “Them” is her three children, 14-year-old Elijah, 10-year-old Levi, and 8-year-old Aiden. She was living with them in a homeless shelter, and it broke her heart.

“I never thought I’d be in that situation,” Shanticia said. “All it took was one layoff to fall short.” That and surviving domestic violence, caring for a daughter with special needs, and coping with her own bipolar disorder. Things had finally started looking up when the pandemic hit. 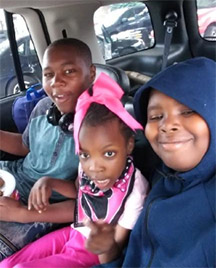 Shanticia finally decided to “put my pride aside” and ask for help from The Salvation Army of Rockford and Winnebago County. At first, she just asked for help with food. She was struck by the fact that she was greeted with a smile and not a trace of judgement. On that first visit, case manager Felicia Meyer asked Shanticia if she needed anything else besides food. And while Shanticia said no, Felicia clearly wasn’t convinced.

“On my third trip for food, Felicia called me aside,” Shanticia said. “She was persistent and truly concerned about our wellbeing.” Shanticia finally shared about her living situation, her struggles keeping her daughter healthy during COVID-19, and all the other things her family faced.

“We’re going to get you some help,” Felicia assured her. Soon, Shanticia was involved in the Army’s Pathway of Hope program, which helps families identify and break the barriers to self-sufficiency. Felicia helped Shanticia get a job that gave her the flexibility to also care for her daughter with special needs. Felicia provided a reference that convinced a landlord to give the family a chance. And once they secured that apartment, the Army provided bedding for the family.

After the first night in their own home, Shanticia’s sons told her, “Mom, we went to sleep smiling.” Shanticia said it was the first night in quite some time she’d slept all night, buoyed by the peace of knowing she had support and a plan for a better future.

As Shanticia was getting back on her feet, she unfortunately sunk into a depressive state. Felicia called her every day, asking, “Did you shower today?” “Have you eaten something?” or “How did Elijah do on his test?” That kind of support kept Shanticia going. “Felicia is awesome. She’s my angel,” she said. Shanticia’s also grateful for the Pathway of Hope program. “God’s work is being done with programs like this.”

Now in a more stable place, Shanticia says, “I wouldn’t be as far as I am without The Salvation Army. They gave me a second chance at life.” Asked what she would say to the Army’s donors, she said, “If they have any doubt that their donations are being well spent, they have nothing to worry about with The Salvation Army. Your donations are helping people like me and my kids, people who need one glimmer of hope.”