For the past 19 years, Major Ed Tutewiler has been chaplain to an unusual “congregation” – a man 12 years into a 90-year prison sentence, CEOs who have spent years in federal custody, a guy with a 6th grade education, disgraced former politicians, men who grew up on the streets and have never held a job.

But Major Tutewiler, the Correctional Services Chaplain for The Salvation Army’s Metropolitan Division, is undaunted as he teaches budgeting, goal setting, ethics, and other life skills classes to inmates at the Cook County Jail and counsels men at the Army’s Pathway Forward, a reintegration program for individuals returning to the community after being incarcerated. He knows he represents a God who specializes in redeeming lost lives. And over the past 19 years he says these men have given him the gift of watching life transformations that have defied all expectations – especially their own.

While he’s been surprised at the wide range of people in the Pathway Forward program, Major Tutewiler says he’s noticed a similar struggle most of them share: addiction. Whether it’s addiction to drugs, alcohol, money, or power, he says that motivates them to do whatever they have to – healthy or not, legal or not – to keep that thing in their life.

“So many decisions in their past have brought a negative outcome,” Major Tutewiler said. “We discuss what other decisions could have led to a positive outcome. We talk about considering the consequences before they act.”

In Pathway Forward, where clients have already served their time and are working to reestablish their lives, these discussions take place alongside job training, education, counseling, and other programs designed to help each person defy the odds and not return to prison.

Inside the prison, these discussions are part of voluntary classes and impact lives that might never see the world outside the prison system. Though these clients’ worlds are smaller, the life transformations Major Tutewiler has seen have often been quite large.

“A number of individuals go through this process and their thinking begins to change,” he said. They start small – for example, talking about the fact that if they want something from the court system, the inmates have to use their language and procedure. “They can’t just do it the way they’ve always tried, the street way,” Major Tutewiler said. When they begin to share their grievances with the institution in proper language, they get the results they want.

“One inmate at Stateville was tagged as difficult to work with,” Major Tutewiler said, going on to explain that he worked with him a while before the man began to understand the importance of following procedures and rules. “When he got it, he moved quickly from high escape-risk to a model prisoner with a job in prison. He learned how to communicate without being threatening.”

Often these life changes lead to the types of successes these individuals have never known before. “One guy had only a 6th-grade education. He was kicked out of middle school, told he wasn’t bright enough,” Major Tutewiler said. “He began to discover he had value, enrolled in college classes, and is now on the honor roll. He had no idea he was capable of all that.

“Many of them learn they can do far more than others told them they could. They learn they do have value,” he said. “That’s one of the most incredible things I’ve witnessed these past 19 years. They’ve shown me how much value they have.” Often faith has been at the root of that life change. 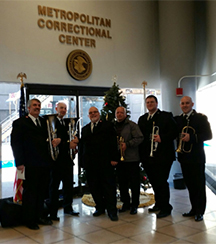 Major Tutewiler’s work reflects the very heart of The Salvation Army. Founder William Booth didn’t expect those in need to come to him in a church, he went out to the most vulnerable in society, meeting their practical needs and offering the love and hope of Christ.

“In the prison system, if you lose hope, you’ve lost it all. There’s nothing left,” Major Tutewiler said. “And hope is one of the things that faith brings.”

He has watched that faith transform lives in radical ways. One individual serving a life sentence for a crime he committed at age 16 became a Christian. “He got a college degree and decided to serve God in prison,” Major Tutewiler said. “Another individual sharpened a staple to scrape a gang tattoo off his face.” He didn’t want to die someday and leave to meet his Maker with that etched on his body.

“It’s an amazing gift they’ve given to me -- to see their faith, to see them overcome their hard pasts.”

Major Tutewiler, in turn, has given them the gift of being remembered and respected. Every Christmas a small group of Salvation Army staff and band members go into local state, county, and juvenile prisons to sing carols, pass out candy and calendars, and share the story of Christmas. Through our Angel Tree program, more than 2,000 inmates’ families receive Christmas gifts, with tags saying they’re from the inmate. And the Army’s music division has just started a new music program in the juvenile detention facility.

During the caroling sessions, the inmates express appreciation for being remembered, especially at a time of year that can be difficult for incarcerated individuals. “Last Christmas, one warden stopped me and thanked us for bringing a little humanity to a very inhumane place,” Major Tutewiler said. It was a bittersweet experience as it was his last Christmas in the prisons; the Major plans to retire from the Army in November 2020.

As he considers his nearly 20 years of correctional services chaplaincy, Major Tutewiler says he treasures most the people and the lessons they have taught him. “Someone once asked me, when they learned I worked in prisons, ‘Isn’t it hard to work with monsters?’” he recalled. “’There are no monsters at Stateville,’ I told her. ‘Just people who have done some monstrous things. And there but for the grace of God go you and I.’”