Story by Craig Dirkes, writer and photographer for The Salvation Army Northern Division

When Envoy Tom Canfield first arrived at The Salvation Army Rehabilitation Center in Minneapolis in 2005, he’d just been released from jail after getting caught selling methamphetamine. Police had arrested him in a scuzzy hotel room, where they found him naked, emaciated, and passed out cold.

It’s been 13 years since then, and Tom still hasn’t left the rehabilitation center. But now he’s there for a different reason.

He is in charge of the place.

“I’m alive and in this position because of the transformative power of Jesus Christ,” Tom said proudly. 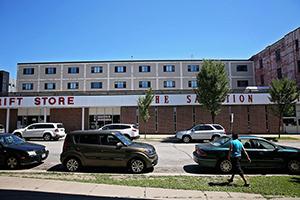 Tom serves alongside his wife, Envoy Trudi Canfield, who works as the rehabilitation center’s program administrator. The couple took over as leaders on June 27.

The rehabilitation center (pictured) offers free or affordable residential addiction treatment for up to 115 men. The men receive six months to a year of onsite housing, counseling, spiritual guidance, and other transformative support – all of which is funded by sales at Salvation Army Stores.

Tom and Trudi are excited to work in their new positions.

“It’s amazing to see the hope in the hearts of these men,” Trudi said. “It’s to the point that I have a hard time picturing them having ever been drunk or in jail. They’re such good guys.”

Tom believes he is uniquely suited to connect with men at the rehabilitation center because he spent much of his life battling the same demons they do. 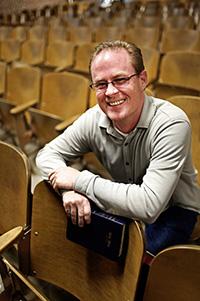 “I know what it’s like to walk in here for the first time,” Tom said. “You’re scared, you’re alone, and you’re not comfortable with Christianity. I’ve been there. But I can show these men how Jesus can help them make the same 180-degree turn that I did.”

Oftentimes, men from Tom’s troubled past enroll at the rehabilitation center. When they see Tom, they hardly recognize him.

“One guy came in and couldn’t believe it was me,” Tom said. “The last time he’d seen me, I was being hauled away in a cop car because we were trying to rob a bank together.”

Similar encounters happen almost monthly, and Tom does not believe they are a coincidence. Each encounter serves as a reminder to Tom that God had a purpose for everything that happened in his life and every person he met.

“I’m in this ministry because of my past,” Tom said. “There was a period of time when drugs, alcohol and criminal activity consumed my mind. Now, God is using me to be His face to these men.”

Tom and Trudi have big plans for the rehabilitation center, and their top goal is to boost enrollment. 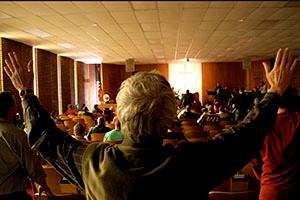 “We want to take what has been started here at the rehabilitation center and build a more robust program that touches on all aspects of mind, body and soul,” Trudi said.

“We want to have our employees moving up at all levels,” Tom said.

Meanwhile, Tom and Trudi are thrilled to engage in the daily work of helping men break free from their addictions and find Jesus.

“The day-to-day interaction of getting to know these men is the best,” Trudi said.

You can support the rehabilitation center by shopping at or donating to any of nine Salvation Army Stores in the Twin Cities. Most donations are tax-deductible (see valuation guide). 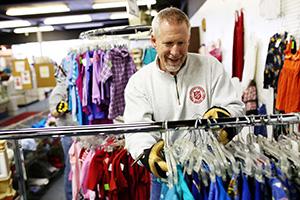 You can also help by cleaning out your drawers, closets or garage and dropping the goods off at any of dozens of collections bins around the Twin Cities.

Donations of clothing and household items are most needed.

If you or someone you love would like more information about enrolling at the rehabilitation center, please call 612-547-5690.