On a recent sweltering day, you could see ten people happily doing yard work outside The Salvation Army’s Shield of Hope and Freedom Center campuses. They were all restaurant managers and office staff from Lawrence’s Fish and Shrimp. And despite the heat, they were thrilled to be there. 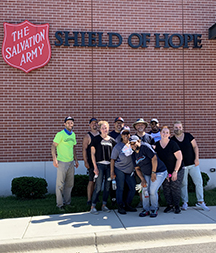 “Our mission is to have a positive impact in the lives of our team, guests, and communities,” said Dan Griffin, CEO of Lawrence’s Fish and Shrimp and the great-grandson of the man who started the first restaurant 70 years ago. “Today is part of that.”

Dan explained that the company has been financially supporting The Salvation Army for some time, but in recent years decided to put their support into action. Two years ago they served meals at the Shield of Hope facility during the holidays. And their team has also rung bells at our Red Kettles during the Christmas season.

For this volunteer event, the Lawrence’s team started the day with a managers’ meeting at the Shield of Hope facility, then heard about the work at both facilities at which they would be volunteering before launching into those projects. Dan said that being on site and seeing the Army’s work makes a difference. “It makes our connection that much more rich and deep,” he said. “We feel good about the work of The Salvation Army.” 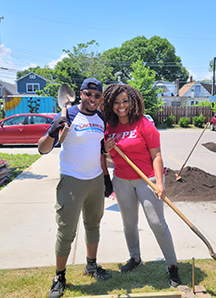 At Shield of Hope, the nation’s first emergency homeless assessment and rapid-response center, half the Lawrence’s team created raised beds in the small lawn beside the building. Sonya Smith, Program Director at Shield of Hope, calls it their Garden of Hope. “We will use our vegetable garden to inspire and encourage our clients and staff to eat healthier and take ownership of protecting the environment,” Sonya said. “Also, to teach them how to care and grow food from the earth that would be beneficial and nourishing to their bodies.”

The fact that volunteers came out to create the garden makes it that much more meaningful to Sonya. “It meant everything to us that the volunteers from Lawrence’s Fish and Shrimp would come on this crazy-hot day to sow seeds of blessings for people they don’t know, that will turn into a beautiful harvest,” she said. “We are so very grateful for all their support and dedication to The Salvation Army Shield of Hope.”

Paula Sullivan, Administrative Assistant/Volunteer Coordinator at the Freedom Center campus, echoed the sentiments of gratitude. Half the Lawrence’s volunteers weeded their site, a task sorely needed as they are currently short staffed and some of those routine tasks got backed up during COVID. “Also, the Army is diligent with money,” Paula explained. “Unless a donation is set aside for landscaping, we won’t use it for that.” 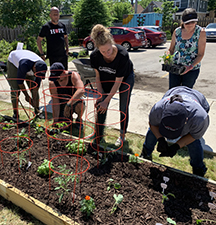 While landscaping might not seem like the highest priority for a facility that houses a drug and alcohol treatment facility, a federally funded halfway house, and a Salvation Army corps community center, Paula explained that it makes a difference. “In this neighborhood, drugs are prevalent, gunfire is prevalent,” Paula said. “When people in the community walk up and see something beautiful and clean here, it says something. Plus, we want to show our clients that they’re worth something.”

John Sullivan, the Chief Building Engineer at the Freedom Center campus, also spoke to the importance of the facility’s appearance. “We’re here to take care of them [the clients], including their mental and spiritual health.” He said he hopes a pleasing environment will help brighten their day. The fact that the Lawrence’s team helped with these tasks certainly helped brighten his. “This was a huge help,” he said. “Their team is a breath of fresh air.”