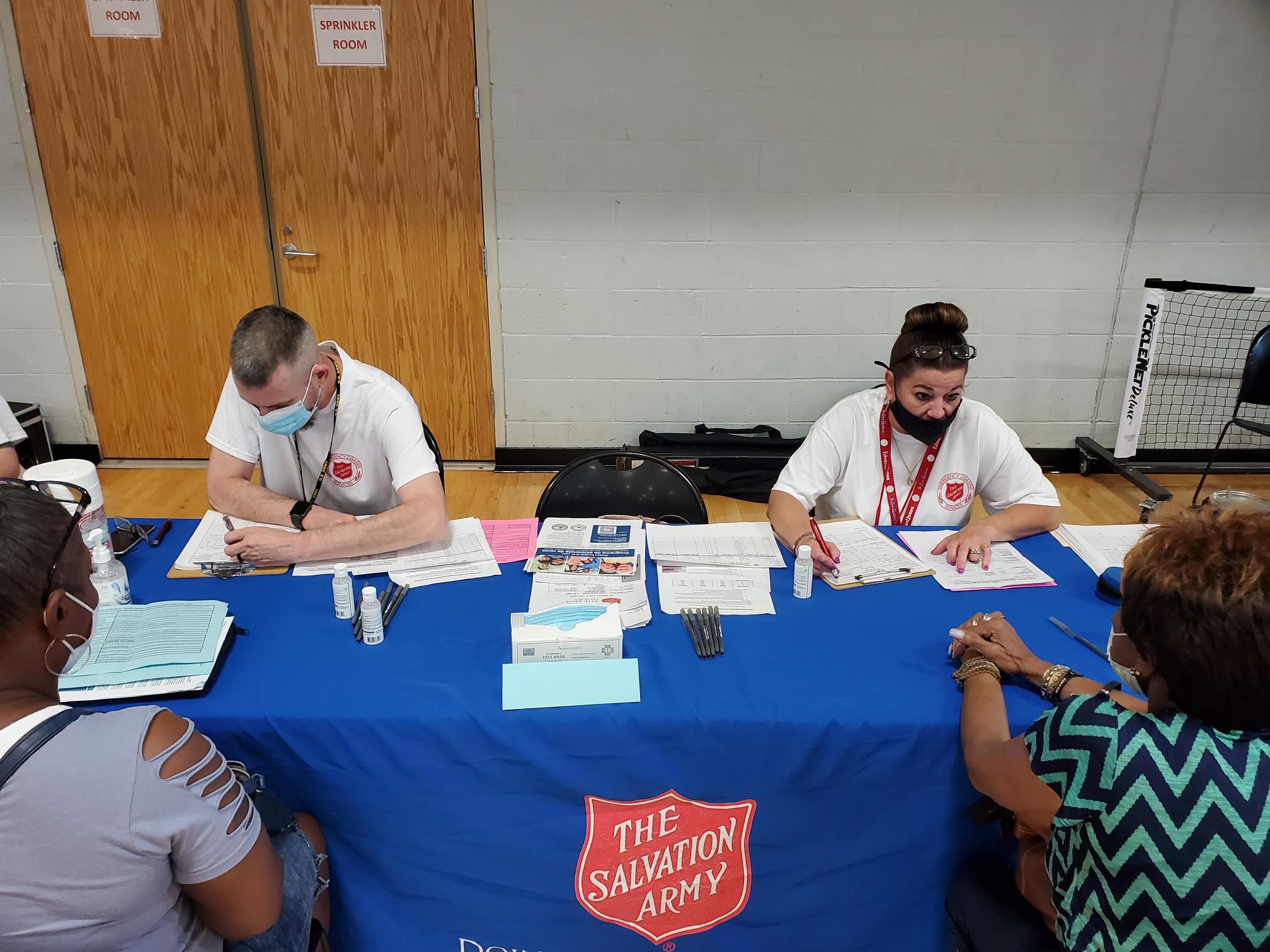 Many voices emerge where The Salvation Army is hard at work in the field, helping flood recovery efforts this week in University City and North County.

Volunteers distribute food and water by the hundreds of servings.

Social services workers hear the stories of flood victims and provide them with resources to buy home supplies.

Organizations hand out supplies to support the community.

The flood survivors tell their individual stories about their ordeals.

“We want to make sure that individuals in the community know that, when something of this magnitude happens, there are people in their organizations that have the compassion, the empathy to be able to say, ‘We’re going to show up for you,’” White said. “This is what community does.” 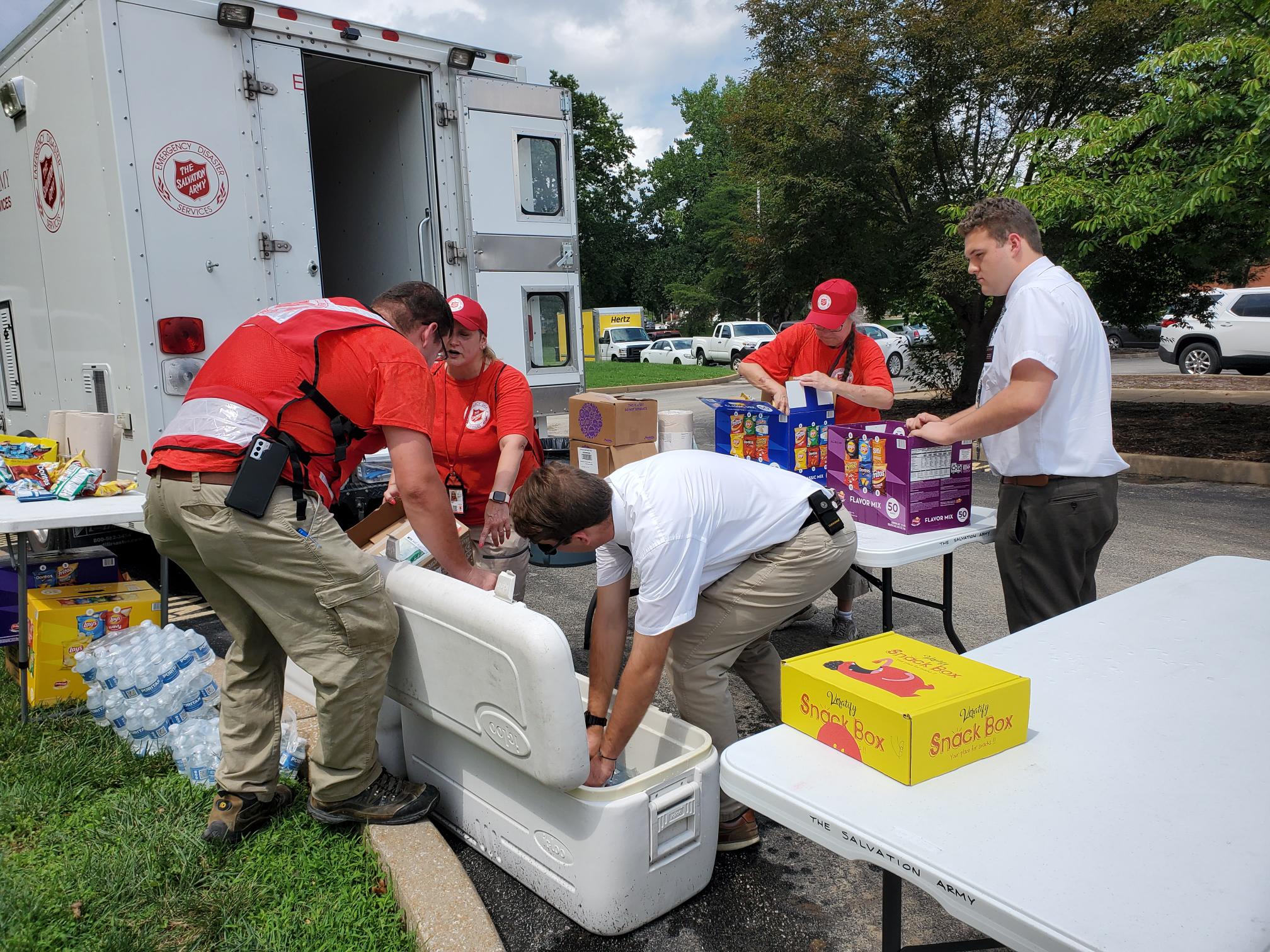 White worked with a staff of six social services workers taking cases from a line of benefits seekers Thursday at the third multi-agency resource center (MARC) this week that The Salvation Army Midland Division has assisted.

Record flooding hit the St. Louis area the week of July 26 and led to significant property damage around the region.

The Salvation Army workers stayed hours after the doors closed on Thursday’s MARC to make sure as many people possible were helped.

“We’ve heard a lot of stories – yesterday where one lady was sleeping in her car because she didn’t have anywhere to go,” said Claudia Reed, regional emergency social services coordinator.

“I think right now, the Red Cross is going out and looking at the outside damage of homes,” Reed said. “They’re not even going inside the homes because there are too many people. We determined that we’re going to work with everybody that comes out.” 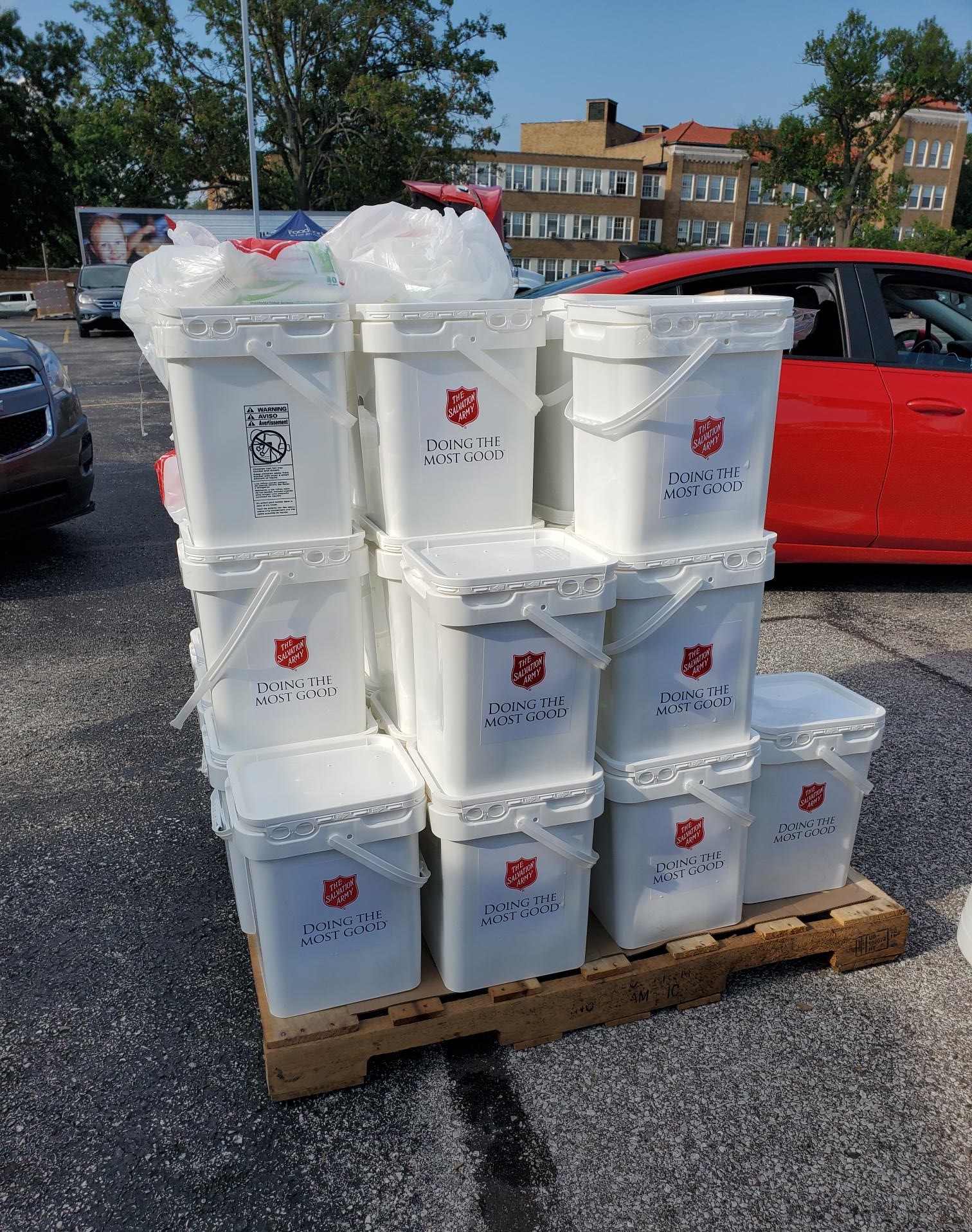 Cynthia Badie-Beard came to University City’s Centennial Commons building, where the MARC was held, to exercise on Thursday afternoon and inadvertently became a Salvation Army volunteer, putting food in the hands of hungry people, signing in individuals for processing, and wanting to return to work on another day.

“I live in U City, not too far from here,” Badie-Beard said. “I come here to work out. The man from the Salvation Army said, ‘Are you here to volunteer?’ I said, ‘No, I came to work out.’ He let me in to the parking lot. Something in his voice. I said, ‘Do you need volunteers?’ He said, ‘Yes,’ and introduced me to [incident commander] Gretchen Luke. Here I am!”

Badie-Beard said of the experience, “It’s been very sad. Very sad to see the families and know that some people had lost everything makes me know how fortunate I am. I’m going to talk to Gretchen. She doesn’t know it yet, but I want to volunteer for The Salvation Army.”

At a separate distribution spot for flood relief supplies, where The Salvation Army gave out a flood kit, with many home-cleaning supplies. Other businesses and organizations from around the community also lined up to help those affected by the flood.

“Action St. Louis and Black Men Build made the call to come out here because we saw our communities, North County, getting flooded and people not getting the resources that they needed,” said Action St. Louis organizer Kennard Williams.

Action St. Louis and Black Men Build distributed cases of bottled water to cars on the humid day with a heat index in the 90s. While many people had their basements flooded, Williams said damage for people went beyond that.

“There are some people who had their entire apartment unit or building, the whole first floor, submerged under water,” Williams said. 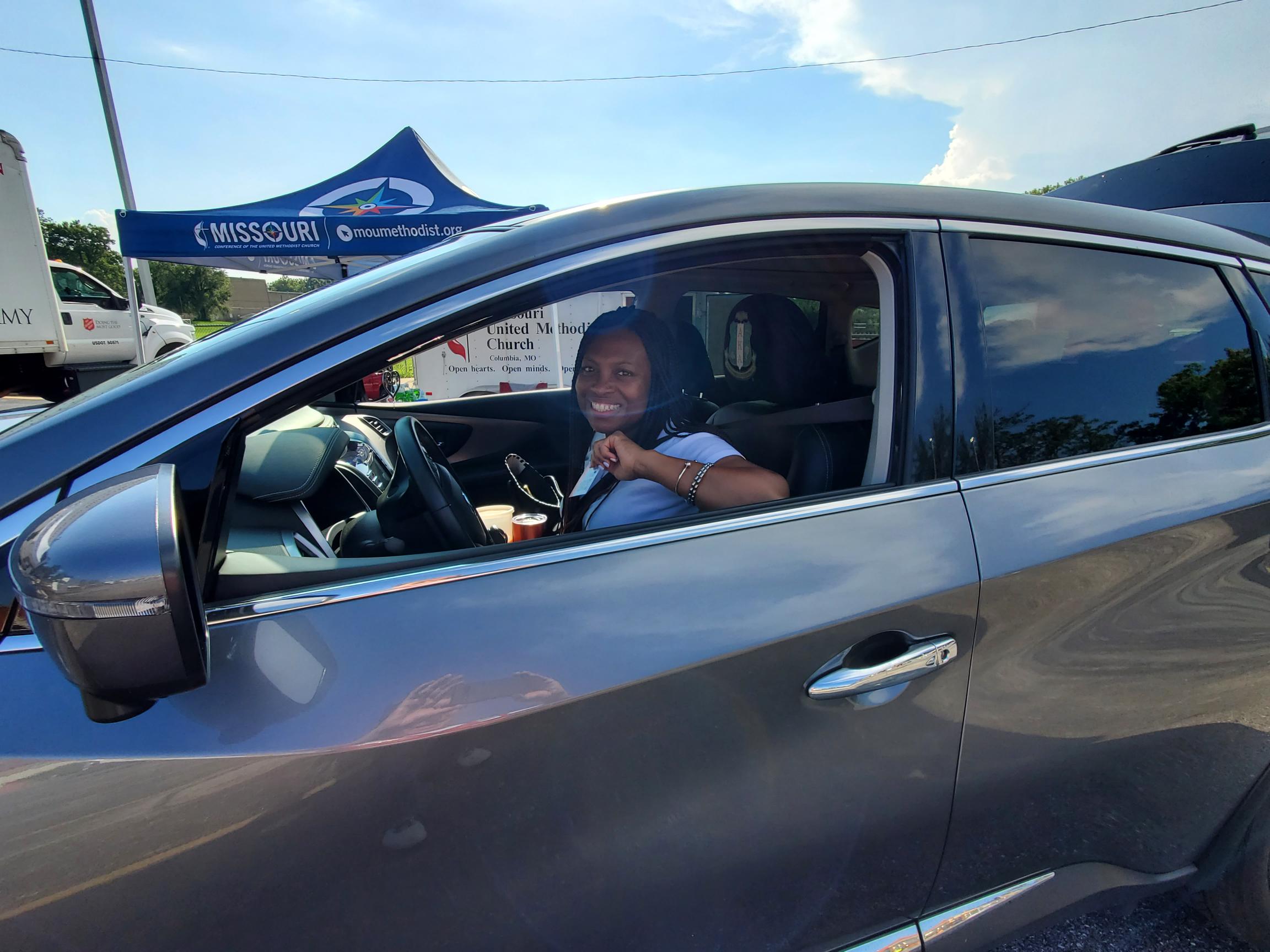 There were the flood survivors onsite to receive supplies and assistance – their presence being the reason everyone else was there.

Some survivors teared up easily, while others delivered their story with steely resolution. Both faced roads ahead of recovery.

“I was actually on the prayer line. I get on there every morning,” said Denise, whose basement was flooded, when she found out about the high waters in her neighborhood. “My daughter, we call in. I heard someone say I’m not going to work today because U City is flooded. I’ve been in U City for 41 years. U City don’t flood.”

Denise continued, “I got up and went to look at the window. Waters were up to the doors and stuff on the car. It dawned on me later. Somebody said, ‘Did you check your basement?’ When I opened up the basement door, I was like, ‘Oh boy.’ I’ve got my kids’ graduation stuff down there and grandkids. All of their stuff was stored in plastic tubs. The water was evidently so forceful it knocked them over and filled them with water. Everything, caps, gowns, had to go.”

At the same supply distribution spot, Larica Taylor had relief and appreciation in her voice after receiving help from the organizations onsite.

"The Salvation Army has been everywhere," Taylor said. "They've been up at the school, giving out items to clean the house. Then, they were at Heman Park to help with the gift cards to help families go buy items for the house. I appreciate The Salvation Army so much, and I am so thankful for what they've done today." 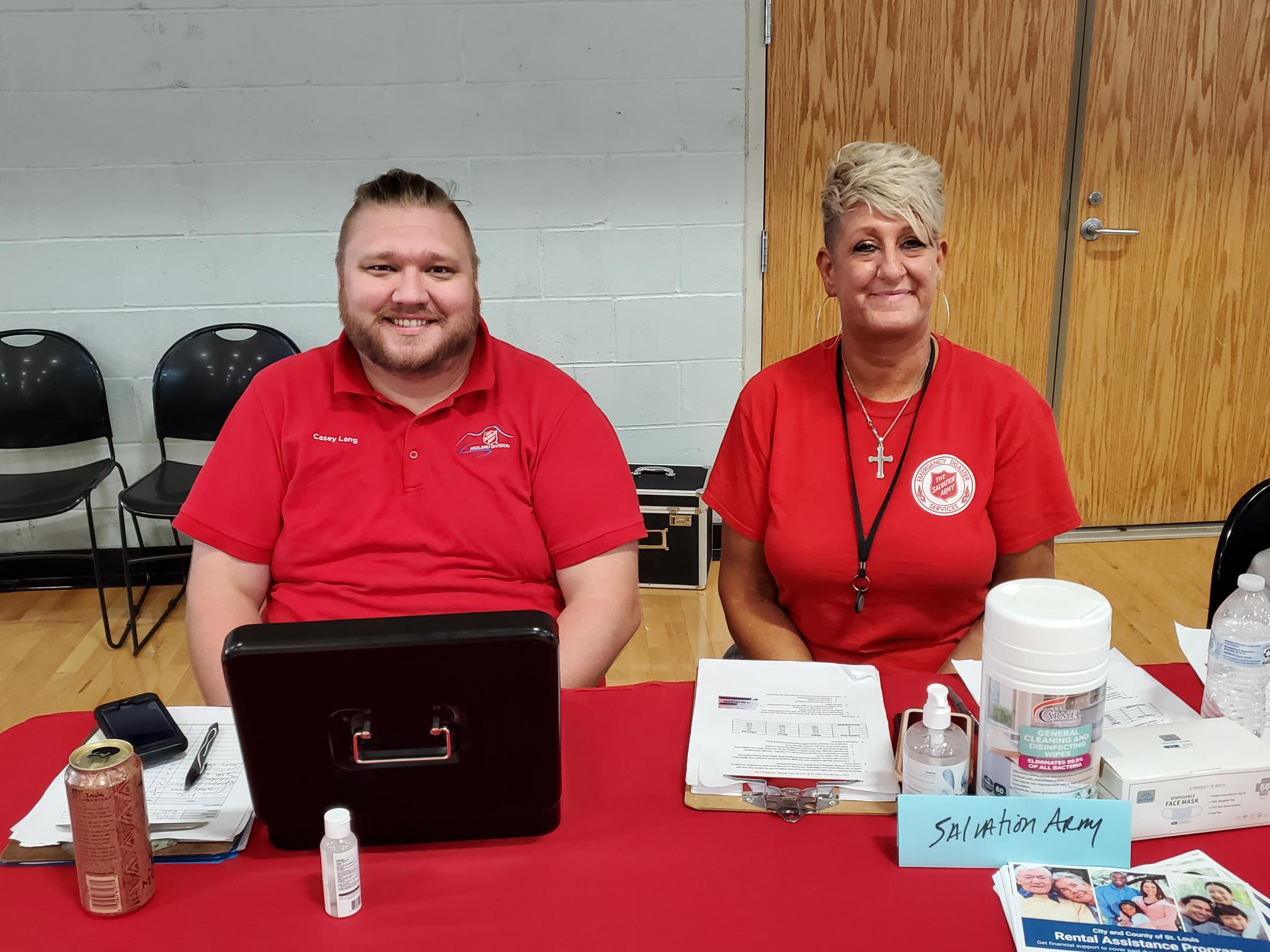