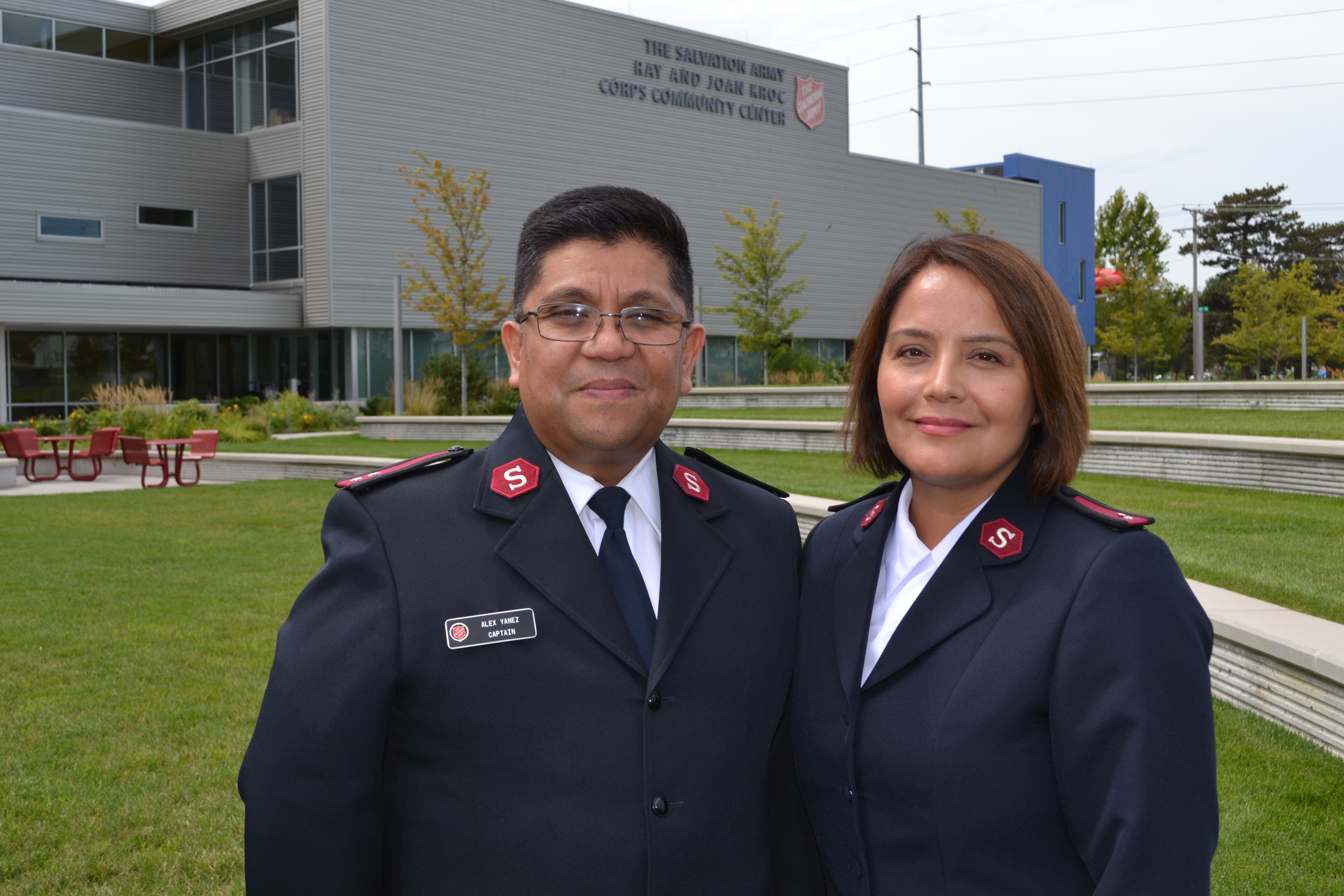 Today -- part two in our three-part series featuring our new officers in Omaha -- we welcome Captains Alex and Carolina Yanez, who are serving at the Kroc Center.

From real estate to retail to the restaurant business, Captains Alex and Carolina Yanez’s diverse experiences as entrepreneurs will serve them well as they begin their leadership at The Salvation Army’s Kroc Center.

Originally from Santiago, Chile, Capt. Alex graduated from Instituto Profesional La Araucana in Santiago with a degree in finance, while Capt. Carolina – whose parents served as Salvation Army officers in South America and Australia – studied office administration at Barton College in Melbourne, Australia. The Yanezes both pursued careers in business – including owning a restaurant and a children’s clothing store in Santiago -- before answering God’s call to serve through the ministry of The Salvation Army. Before entering ministry, Capt. Alex also worked in finance for The Salvation Army’s Territorial Headquarters in Santiago.

Captains Alex and Carolina met when they were kids. They were both active in The Salvation Army’s youth programs in Santiago, but it wasn’t until after they were married in 1999 that they learned their families had intersected long before they were born.

“It’s a very interesting story,” said Capt. Carolina. “We found out that our fathers had known each other in The Salvation Army world.”

Capt. Carolina explained that when her father was 12, he was abandoned by his family and left on his own to survive in Santiago. Wandering the city streets, he recognized The Salvation Army’s red shield and knocked on the door – which was opened by Capt. Alex’s father, who was serving as the corps officer. Capt. Alex’s father took the young boy in, offered him food and shelter and helped him find a job. As an adult, Capt. Carolina’s father and mother became Salvation Army officers themselves.

“I don’t know why it took our families so long to tell us, because it’s a great story!” said Capt. Carolina.

Captains Alex and Carolina began their ministry with The Salvation Army in Kansas City in 2004 and later served at the Kroc Center in Green Bay, WI. They come to the Omaha Kroc Center from the Cold Spring Corps near Milwaukee, where they served for the past four years. While an officer at the Cold Spring Corps, Capt. Alex also served a double appointment as the multicultural ministries coordinator and Echelon Milwaukee liaison for the Wisconsin and Upper Michigan Division.

The Yanezes are thrilled to be back at a Kroc Center again, and they already have several new initiatives in the works. The public is invited to attend Rally Day at the Kroc Center on Sept. 10 – a free event that will feature a fireworks display and a prayer service to commemorate the anniversary of 9/11. The Yanezes are also planning to launch a Community School of Music on Sept. 22 – a year-long program of vocal and instrumental music instruction for youth ages 7 through 15.

“We are expecting beautiful things out of this program,” said Capt. Alex.

They are also planning to ramp up activities for older adults in September with the launch of the J.O.Y. (Just Older Youth) program and are hoping to offer more opportunities for Hispanic families, including a Bible study in Spanish.

“One thing I noticed during the Backpack Drive was that the majority of people who came through were from the Hispanic community,” said Capt. Carolina. “That was eye-opening for us, and it presents a good opportunity for us to provide services for this particular community.”

When they aren’t busy with programming and ministry at the Kroc Center, the Yanezes enjoy spending time with their two daughters, a high school sophomore and a college junior. Capt. Alex also enjoys cycling and tennis, while Capt. Carolina loves interior design, watercolor painting and gardening.

Their plates are full to overflowing, but Captains Alex and Carolina Yanez wouldn’t have it any other way.

“We are so blessed to be here,” said Capt. Alex. “And we are looking forward to connecting with the families in the neighborhood,” added Capt. Carolina.