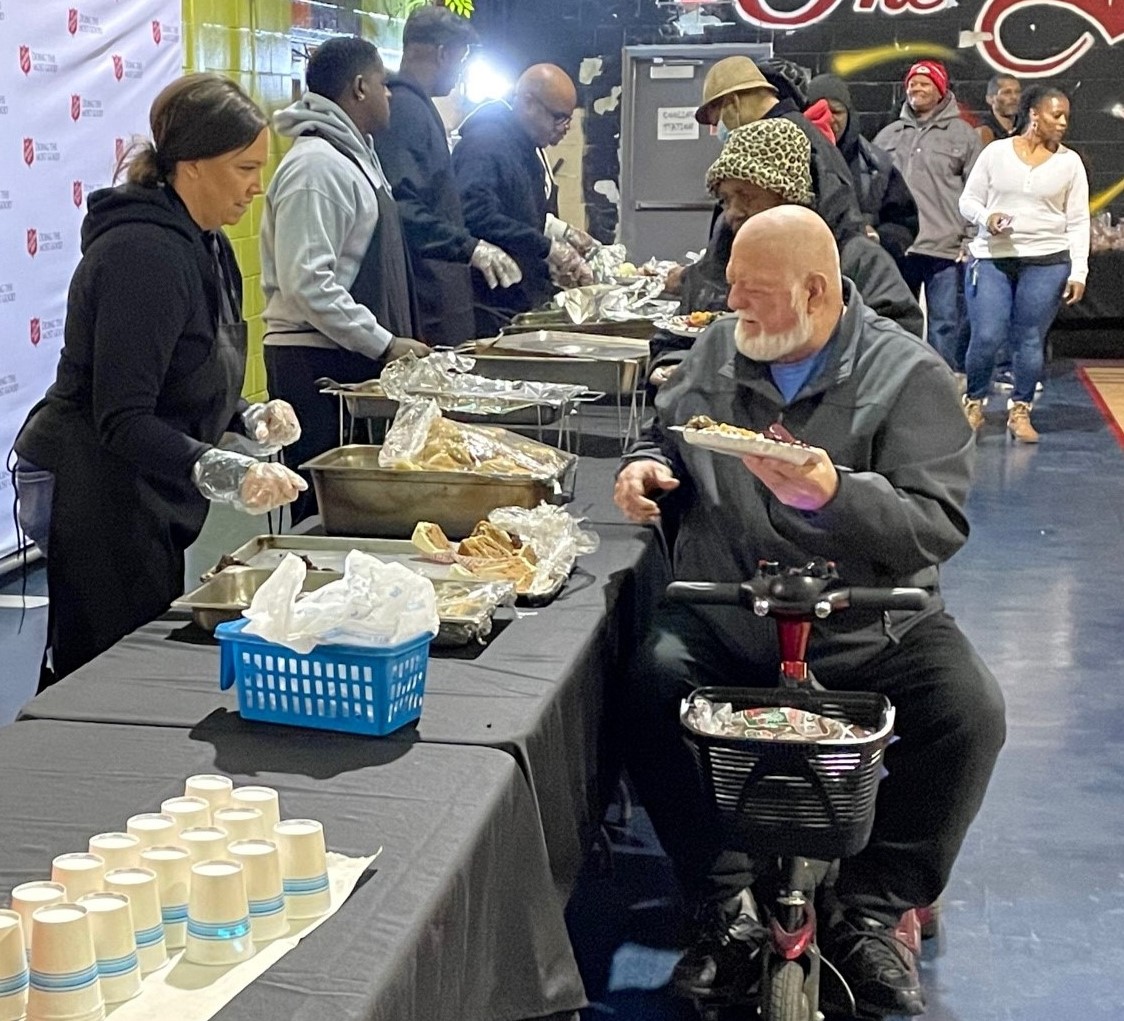 It’s a few days before the big Thanksgiving meal, and your oven stops working. You have 15 thawed but uncooked turkey breasts and the fixings for numerous sides, pies and cakes that will need to be baked.

On top of that, you’re expecting between 100 and 150 hungry people – some who won’t get another Thanksgiving meal on the actual day.

What do you do? If you’re officers and staff at The Salvation Army North Corps, you do what needs to be done whatever the circumstances.

“Each of us took a few turkeys home and used our own ovens to make sure they were ready for today,” Lt. Marsha Williams-Miller said of Friday’s annual Thanksgiving luncheon. “We have people depending on us, and we couldn’t let them down. So, we did what we had to, and it all worked out.

“But these kinds of mishaps aren’t unusual to us. Last year, our heat went out the day of the meal, and, because of COVID, we weren’t able to host an actual dinner the past two years. We only had to-go meals. We stay ready and prepared for most anything, because if we aren’t, people can go hungry.”

Today, the North Corps served those 100-plus members of the community a traditional Thanksgiving meal of turkey and ham, stuffing, mashed potatoes and gravy, cranberries, greens and yams along with pie and cake.

The 10 pies and 10 cakes were donated by a local employee of United Healthcare who makes frequent donations, so no one had to worry about making room in their ovens for those. Incidentally, the oven was fixed prior to the meal, and it did prove useful.

Prep work to feed so many people began days ahead of Friday’s meal, which was held in the gym. No to-go meals were prepared, as the intent of today’s meal was to have food and fellowship together, Lt. Marsha said.

Earlier in the week, North Corps officers and staff discovered all 12 donated turkeys for the meal were spoiled when they were unpackaged. Once again, North Corps staff rolled with the punches, purchased 15 full-size turkey breasts and made it work.

“The people of this community are resilient, so we also know we need to be resilient,” Lt. Marsha said.

For the tenth year in a row, several members of the Omaha Black Firefighters Association volunteered to serve the meals buffet-style.

For 22-year fire veteran Jason Bradley, volunteering to work the North Corps Thanksgiving meal is a great way to give back.

“I’ve always made it a point to do things that benefit the community, and this is another way to do that,” he said. “It’s nice to come back each year, see some familiar faces and know that we are making sure each person has a Thanksgiving meal. We don’t take that for granted.”