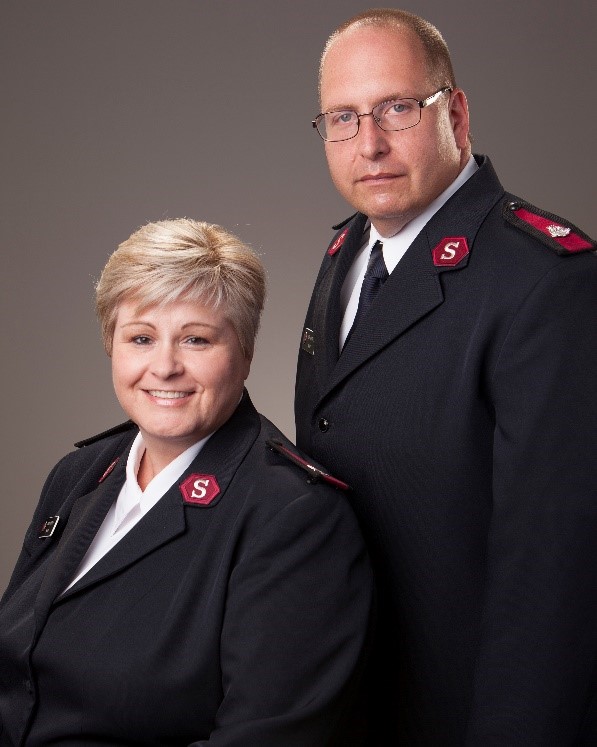 On July 1, 2020, The Salvation Army of Racine welcomed Majors Jeff and Dawn Russell, new officers appointed to the worship and community center.

The Russell’s come to Racine with a wealth of experience. Since being commissioned as Salvation Army Officers in 2002, they have served in communities across the Midwest including; Gary, Indiana, Kalamazoo and Lansing Michigan, Fergus Falls, Minnesota, Burlington, Iowa, Green Bay, Wisconsin, and more recently, in Traverse City, Michigan.

The Russell’s got married in 1995 and just celebrated their 25th anniversary. Both Major’s earned their Bachelor of Science degrees from Olivet Nazarene University.

The extended Russell family consists of two married children and four beautiful grandchildren, who live in Green Bay, Wisconsin, and North Carolina, where their son-in-law serves as a Gunnery Sergeant at Camp Lejeune, in the U.S. Marine Corps.

Major Dawn was born and raised on the south side of Madison, Wisconsin. A home visit from a Salvation Army soldier asking her mom if Dawn and her siblings would like to attend Sunday School was her first step on a lifelong journey of faith, compassion, and serving neighbors in need.

“I understand the needs and issues that plague the underprivileged because I was one of them. I know what it feels like when your food stamps don’t last the whole month,” she said.

Before attending the College for Officer Training, Dawn worked as a Lab Clerk at Meriter Hospital for more than 13 years, which she attributes to her “hard work and perseverance to a pathway of hope.”

Major Jeff, was born in Port Jefferson, Long Island, New York. His family was not new to The Salvation Army, as he had uncles and aunts that served as Salvation Army Officers on both coasts.

However, Jeff was not truly introduced to the Salvation Army until he was 11-years-old, when he moved to Modesto, California to live with his grandmother and uncle for a year. It was there that he started his journey with the Lord.

He then moved to Wisconsin with his mother and stepfather and began attending the Madison Salvation Army Corps. After graduating from high school, he earned an Associate’s degree in Electronics. Before entering the College for Officer Training, he worked for Oscar Mayer more than four years.

The Major’s said their mission is to serve suffering humanity as well as bringing the message of Jesus Christ to a world in need.