Carol Knox is a Volunteer Chaplain for The Salvation Army of Milwaukee County’s Chaplaincy Program. She also assists with Emergency Disaster Services and deploys to areas where natural disasters, like Hurricane Florence, leave communities in shambles.  While there, she provided emotional and spiritual support, and assisted in providing meals to those who were in need.

Carol and another Milwaukee County chaplain, Marcine, were deployed to North Carolina on September 24, 2018. You can read about Carol’s experience below.

Q. What was the conditions of the area you were in? 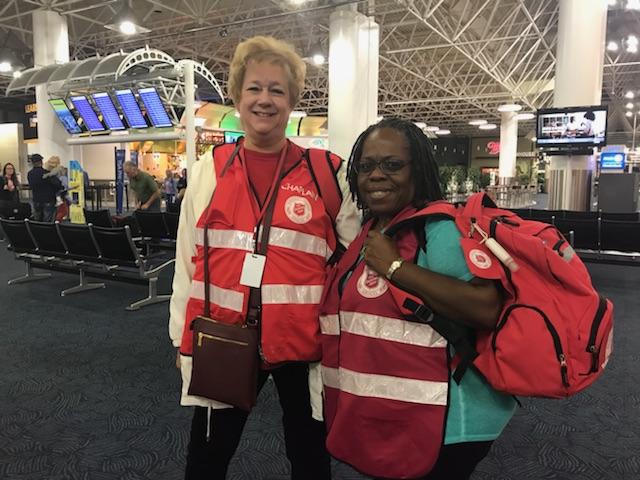 A. The immediate area was Wilmington, and I didn't see a lot of damage in the city.  What I saw were signs that were damaged, some roofs peeled back, and boarded up windows.

Q. What was your main role while in North Carolina?
A. As an ESC (Emotional and Spiritual Care) Specialist, our role was to travel to the various assigned areas with the Canteen (mobile feeding units) trucks taking meals to the people.  We also took supplies, which were loaded in our vehicles.

Q. What was your typical day like?
A. Our day started at 6 a.m. and ended at different times, depending on when you were done and how far you had to travel to the various areas.

Q. How many people do you think you helped on a daily basis?
A. We served the people until all the meals were gone and the supplies.  Depending on where we were serving, we could serve 250 to a 1,000 meals a day

Q. Who did you work with closely with down there?
A. The men who drove the Canteen I was assigned to. They were from Ocala, Florida.

Q. How did you find out you were being deployed to North Carolina?
A. My partner and I said if we were asked to go to NC, we would go.  When asked who was interested in going, I was and found out later that my partner was too.

Q. Is there anything you'd like to add?
A. Since I've been a volunteer Chaplain in the Salvation Army Chaplaincy Program, I've enjoyed many opportunities. This includes the training I've had in preparation for being deployed and being able to help people in a traumatic situation or crisis.  Through that, I've been able to minister the love of Christ by being His hands and feet and living out my faith in a way that is not about me, but about the immediate need that presents itself to me.

About The Chaplaincy Program

The Salvation Army began offering assistance to disaster survivors after a major hurricane hit Galveston, TX in September 1900, destroying the coastal city and killing thousands of people. Since then, The Salvation Army has responded to numerous natural disasters, transportation accidents, civil unrest situations, and terrorist attacks. By providing beverages, meals, and emotional and spiritual care to first responders and survivors, The Salvation Army strives to bring hope and healing to people who find themselves in the midst of extremely difficult situations.