For the first time in nearly 130 years, giving at a red kettle does not require you to carry cash

This Christmas season, every red kettle across the Midwest will be equipped with Apple Pay and Google Pay, allowing donors to simply “bump” or scan their phones to make a digital donation (see video at bottom). 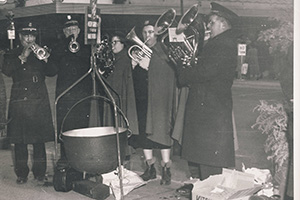 The Salvation Army will use all electronic kettle donations to provide food, clothing, shelter, family mentoring, disaster relief, and other critical services for people in need. Funds will be distributed to local Salvation Army units based on the donor’s billing ZIP code, and an email receipt will be sent directly to their phone.

In addition to giving at a red kettle, you can also help people in need by becoming a bell ringer. Just two hours at a kettle raises an average of $60 for local Salvation Army services. Sign up to bell ring now.

The first red kettle appeared in San Francisco in 1891 when Salvation Army Captain Joseph McFee placed an iron pot on the boat docks and asked people to toss in coins to help the poor. He then placed a kettle on the street asking people to “Keep the Pot Boiling” and soon he had collected enough money to feed 1,000 people on Christmas Day. The red kettle went on to become a staple throughout the United States and in cities across the world. Thousands of hardworking families are battling poverty. You can help them win by donating $25 a month or becoming a bell ringer. Join The Salvation Army this Christmas season and #FightForGood.