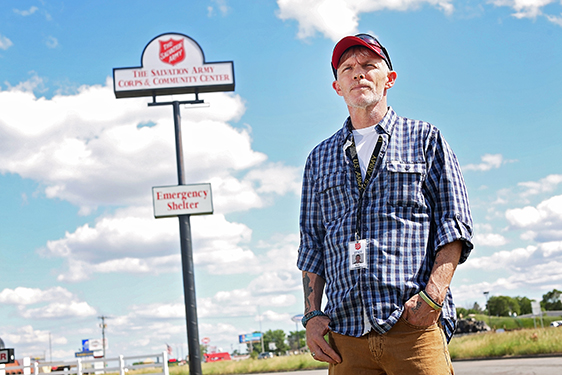 If not for The Salvation Army, Ricky Gustafson would have been back on drugs the same day he was released from treatment in April 2015.

“I know I would have gotten high right away,” admitted Gustafson, a 51-year-old U.S. Army veteran.

He had just finished inpatient treatment at the VA Medical Center in St. Cloud, Minn. Forty-five days earlier, he’d arrived there “ready to put a bullet in my head” after a lifetime of drug and alcohol abuse.

Knowing that Gustafson had no friends or family to support him after treatment, a VA counselor suggested that he call the The Salvation Army and ask about temporary housing. The facility includes a 69-bed shelter, with several rooms reserved specifically for veterans.

Gustafson called and discovered a Salvation Army program that would provide him with up to two years of onsite housing, three hot meals a day, and unlimited access to Salvation Army caseworkers.

“The program saved my life,” Gustafson said. “Really, it did. Without a place to live, I would have gone right back to staying with my friends and getting high. This place turned me into a different person.”

Gustafson was somewhat familiar with The Salvation Army; he grew up attending a Salvation Army church in Wrangell, Alaska, with his adoptive parents and siblings.

“We went there three or four times a week,” Gustafson recalled. “It instilled good values in me. For the rest of my life, I could tell when God was speaking to me, even when I was doing bad things.”

His troubles started at around age 15, when his mom and dad split up. His mom took Gustafson and his two younger siblings with her to Arizona. Gustafson soon dropped out of high school and would spend the next several years bouncing between Arizona and Minnesota, where he had family in St. Paul.

“That time in my life was my first introduction to sex, drugs and rock ‘n roll,” he said. “It created problems.”

At age 18, he obtained his GED and enlisted in the U.S. Army, serving as an infantryman for four years. He would spend the rest of his life in Minnesota working jobs in road construction and building maintenance, using drugs and alcohol incessantly. He was married twice, and both of his wives died – one from a drug overdose, the other from suicide. 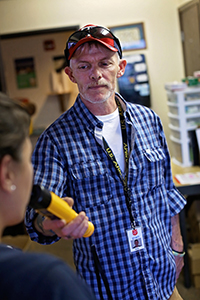 Gustafson wound up staying at the St. Cloud Salvation Army for one year. In that time, he became a different person by humbling himself before God.

“I told God that I surrendered,” he said. “I told Him I would be whatever He wanted me to be. I’ve tried to have that attitude every day since.”

He began living on his own in March 2016 after securing local jobs in property maintenance and building restoration.

Then, after several months of working both jobs, he quit the latter to work for the St. Cloud Salvation Army. He continues to work there five nights a week, 4 p.m. to midnight, doing everything from cooking dinners, to light maintenance, to administering breathalyzers to shelter guests.

“I took a pay-cut to work here, and I was proud to do it,” Gustafson said. “My life isn’t about money anymore. I’m 51 years old, and I am finally beginning to understand who God made me to be.”

When Gustafson isn’t working, he attends AA meetings six days a week, including twice a day on Fridays and Saturdays.

He often reflects on how The Salvation Army supported him both as a child and as an adult.

“After all this time, I’m right back here at The Salvation Army,” Gustafson said. “That blows me away.”