William Booth began the Salvation Army in 1865 as a way to help the suffering souls throughout London who were unwilling or felt unwelcomed to a traditional church. Many of the first converts were thieves, prostitutes, gamblers, and drunkards, and the gospel of Jesus Christ spread far and wide to those in need. 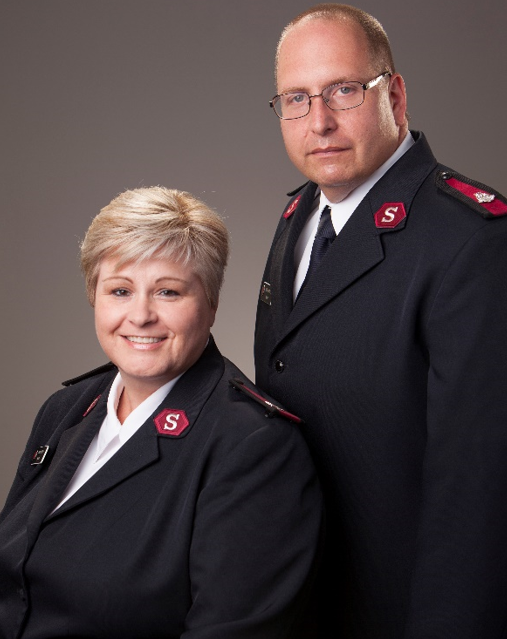 For over twenty years Major’s Jeff and Dawn Russell have served as officer’s in communities across the Midwest since being Commissioned as Salvation Army Officers in 2002 including: Gary, Indiana, Kalamazoo and Lansing Michigan, Fergus Falls, Minnesota, Burlington Iowa, Green Bay, Wisconsin, Traverse City, Michigan, Racine, Wisconsin and currently, Appleton, Wisconsin.

As commissioned Salvation Army officers (Ordained Minister’s), both Major’s serves and their duties include but not limited to, Worship and Spiritual Leader’s, Administrator’s, Teacher’s, Case Manager’s, Counselor’s, Youth Leader’s, Marketing Strategists, Human Resources Managers. Public Relations Coordinators, and in charge of the total financial operations of the appointment which have been Multi-Million dollar budgets.

Major’s Jeff and Dawn have been assigned to tasks that have included major property projects one being in charge of a
Capital Campaign in which they were entrusted to bring together a Board of Community Leaders and raise needed funds for the project and had input in the design of the Multi-Million Dollar Facility. Leadership in The Salvation Army entrusted the Russell’s to acquire properties and to sell Salvation Army owned properties.

Both Jeff and Dawn have also gained certified skills in emergency disaster services. They both have been involved in Local Emergency Boards and have played a role in Mock Disasters. They also are certified in CPR.

One area in which both of the Russell’s excel at are planning and implementation of large events including; Christmas Toy and Food Distribution for 1000’s of families, volunteer events, Annual Civic Events and other large community events.

In their early years before they married; after High School, Dawn married and had two beautiful children, Dione and Justin. She became a Certified Nursing Assistant and worked at two Nursing Facilities. A while passed and she had several positions at other jobs. Soon Dawn got divorced and became a single parent. Through some struggles and losing of her main income she became reliant on government help. Dawn would not allow herself to put her children through what she lived with all of her youth, so she was determined to use her skills and grow more skills by volunteering at a University in Madison, WI to get training in data processing and office management; from those skills and her nursing skills she became a Lab Clerk at Meriter Hospital for over 13 years before becoming a Salvation Army Officer. She was clearly on the pathway of hope!

Major’s Jeff and Dawn married in 1995 and Major Jeff took on the role as Stepfather to Dawn’s two children. Before entering the College for Officer Training (seminary), Jeff worked for Oscar Mayer for over 4 years as a Cook and Plant Worker. Both Major’s Jeff and Dawn earned their Bachelor of Science degrees from Olivet Nazarene University and continue to educate themselves by attending Seminars and earning Certificates in various positions that help them achieve their goals and sharpen their skills in various areas.

If you would ask both Major Jeff and Major Dawn what they love the most in this life, they would each give you the same answer; “we love our Lord and Savior, Jesus Christ, and we love our family, especially our 5 grandchildren, Amya 14, Ayden 8, Marvin 6, Myles 4 and Maxwell 10 months.”

“Life is precious and every moment counts. Be good to one another.” “Love the Lord your God with all your heart and with all your soul and with all your mind. This is the first and greatest commandment. And the second is like it; ‘Love your neighbor as yourself.” Matthew 22:37-39