The Chicago Wolves’ third annual Salvation Army Red Kettle Game was a nail-biter, going into overtime and eventually being decided by a shootout. Though the Rockford IceHogs eventually went home with the win, Wolves fans made the night a success with generous donations to The Salvation Army’s annual Christmas campaign. 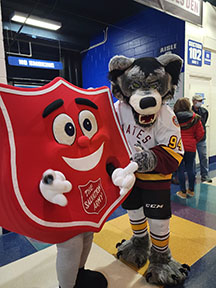 The Salvation Army brought two brass bands, two mascots, and eight of their iconic Red Kettles to help drum up donations and volunteers. Those who signed up to volunteer to be a Red Kettle bell ringer received tickets to an upcoming Chicago Wolves game. 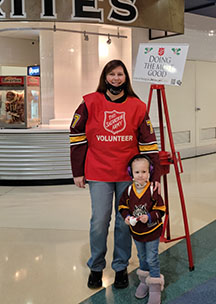 Major Enrique Azuaje, General Secretary for the Army’s Metropolitan Division, dressed in a personalized Chicago Wolves jersey, participated in the ceremonial puck drop to start the game, and fans got the chance to try to “chuck a puck” into a Red Kettle on the ice during the fan-favorite Kettle Toss.

By the end of the night, Chicago Wolves fans had donated nearly $750 in the Red Kettles, all of which will go to assistance programs – such a food pantries and rent assistance – to help ensure that Hope Marches On for our neighbors in need this holiday season.