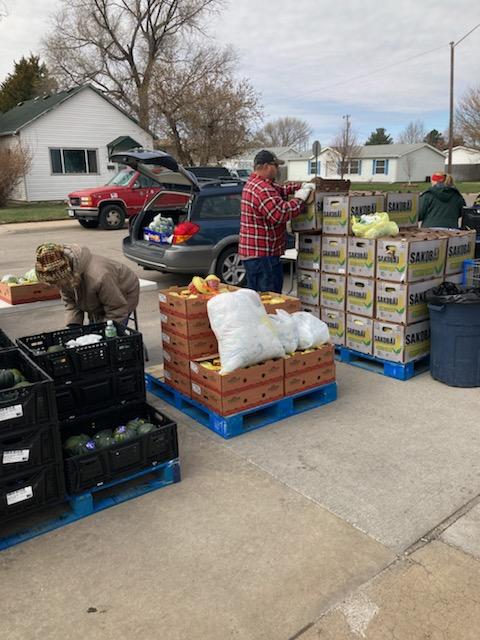 When Majors Lynneta and Harold Poff arrived to begin their assignment at the North Platte Corps in July of 2019, Maj. Lynneta vowed the food pantry shelves would never be bare. Trusting that God would provide, she declared, “If we give away the food we have, then God will supply us with more to give away.”

Maj. Lynneta’s confident hope in what she could not yet see has come to fruition. In 2020 alone, The Salvation Army of North Platte gave away more than 1 million pounds of food to individuals and families in need via the corps’ food pantry and produce distribution programs.

“When a truck load is rejected at the distribution center because a pallet is damaged or mislabeled or because there is an overage or a mistake in the order, the driver is directed to contact us,” said Maj. Lynneta.

She also notes that the corps has a good relationship with the truck stops along nearby Interstate 80, as well as with the North Platte Weigh Station.

“If a truck driver doesn’t get referred to us by the distribution center for some reason, they usually make their way to a truck stop or the weigh station to inquire about where they can ‘dump’ their load,” explained Maj. Lynneta. “The drivers then get referred to us. We take the load off their hands so they can get on the road again. It’s a win-win for everyone.”

Food insecurity has increased during the pandemic, resulting in more visitors to the corps’ pantry and weekly produce distributions. The corps serves between 150 and 225 households each week via its produce distribution alone, in addition to the individuals and families who visit the food pantry.

Since last March, the corps has run the produce distribution as a drive-thru operation in order to follow safety and social distancing protocols during the pandemic.

“Prior to COVID-19, people would line up and walk through to pick up the produce, but this method has worked really well for us and for those we serve, so we will probably continue with the drive-thru even after pandemic restrictions have eased,” said Maj. Lynneta.

Despite the increase in visitors to the pantry and produce distributions, the corps has managed to provide food for anyone who needs it.

“There have been a couple of times in the last year or so that our shelves have gotten sparse, but God has continued to bless us with additional food to give away to people in our community,” said Maj. Lynneta. “Sometimes we end up with an abundance of particular items – like mushrooms or bananas or cereal – but it always comes and goes, and people appreciate it.”

The corps’ food pantry is open three days a week. Families and individuals are eligible to visit once every 90 days (there are also two other food pantries in town), on average receiving approximately 50 pounds of food, including meat and fresh produce.

Those in need can receive fresh produce and other perishables at the weekly distribution as often as needed. The distribution, which is held every Monday at 11 a.m., often goes until 4 or 5 p.m.

“It is not unusual for cars to be lined up several blocks, waiting sometimes hours for their turn to receive food,” said Maj. Lynneta.

Giving away more than one million pounds of food in a year is no small task. Maj. Lynneta credits the corps’ legion of generous volunteers for the success of the food program.

“We honestly could not do this without our volunteer force,” she said. “They truly have a passion for making sure people have food.”